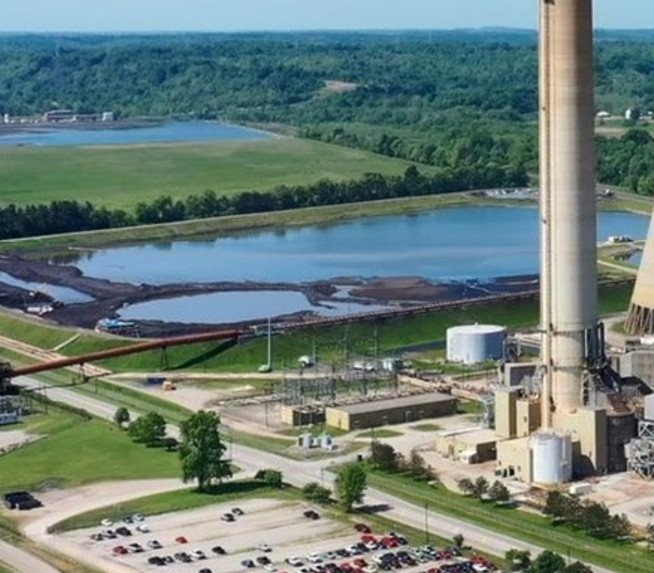 The operator of Ohio’s largest coal-fired power plant says it plans to switch to a different waste handling method to comply with a federal order to stop using an on-site coal ash pond.

The U.S. Environmental Protection Agency last month denied a request by the James M. Gavin Power Plant for extra time to comply with federal coal ash rules that have become a higher priority for enforcement under President Joe Biden.

Barring any grid reliability problem that might justify a later deadline, the EPA has said no more waste can go into the pond after April 12, 2023.

Coal supporters and opponents have speculated that the EPA’s decision may force the 2,650-megawatt coal plant to close, but an official with the company that manages the facility says it plans to keep operating while converting to a “dry ash” handling system that complies with the federal rules.

“Gavin has already ceased placing CCR [coal combustion residuals] into the Bottom Ash Pond and will complete conversion of its units to dry ash handling in December,” said Lisa Carty, vice president of environmental for Kindle Energy, said in an email responding to questions from the Energy News Network. The company expects to close the bottom ash pond by September 2024. “Gavin was in compliance and will remain in compliance with the CCR regulations.”

Dry ash handling generally uses air to cool coal ash for storage before possible commercial use or eventual disposal in a landfill. Unlike wet ash handling, it avoids the addition of water to clean out and transport ash.

Adding water for wet ash handling is “basically weaponizing the coal ash,” because it increases the danger that hazardous pollutants will dissolve and leak out into groundwater, said attorney Lisa Evans with Earthjustice. Nonetheless, she added, any landfills that receive dry coal ash wastes should be properly lined and meet regulatory requirements in effect since 2015.

“EPA needs to follow up this final decision with explicit timeframes for Gavin to come into compliance with all of the violations that are cited in the final letter,” Evans said.

In its Nov. 18 order, however, the agency found groundwater monitoring systems for the bottom ash pond, a fly ash reservoir and a residual waste landfill were inadequate. Additionally, EPA noted, material from the closed fly ash reservoir is sitting in groundwater. And Gavin failed to show that an alternative source caused groundwater contamination.

“EPA denied the request for an extension because Gavin has failed to demonstrate that it is in compliance with the CCR regulations,” said an agency statement responding to questions from the Energy News Network. “EPA has determined that the most environmentally protective course is to implement the existing rules and to initiate additional regulatory actions.”

The Gavin Power Plant has a long and troubled history with pollution. The plant’s former owner, American Electric Power, bought out residents’ homes in Cheshire 20 years ago, after air pollution from the plant plagued the village with sulfur dioxide clouds and acid rain. But the buyout didn’t end the plant’s pollution problems.

The Sierra Club sent the plant a notice in October 2014 that excess sulfur dioxide emissions created a public nuisance in violation of Ohio law. Updated modeling commissioned by the group in 2020 also found excess sulfur dioxide emissions. The Sierra Club has appealed rule changes that would prevent it from suing directly to enforce alleged Clean Air Act violations. The case is still pending.

Carty did not detail just how the Gavin plant plans to close the bottom ash pond. Evans at Earthjustice compared the volume of material to a six-and-a-half-story building.

About 120 people still live in the village, according to the U.S. Census Bureau. Groundwater pollution from the site could also potentially reach the Ohio River, a drinking water source for millions of people.

“What you have here is an ongoing issue of legacy coal ash contamination in and around the Gavin plant,” said Neil Waggoner, who heads the Sierra Club’s Beyond Coal campaign in Ohio. The plant sits on the shore of the Ohio River, and wastes have been dumped on site for decades. Potentially hazardous contaminants in coal ash include mercury, cadmium, arsenic, lead, chromium and more. “It’s a real witch’s brew of bad stuff.”

Additionally, Waggoner noted, while EPA has technically denied Gavin’s request for an extension of time, the plant wound up with roughly two additional years beyond the initial 2021 compliance date to put material into the bottom ash pond. So “I’m not giving Gavin a pat on the back,” he said.

The EPA still has not made final rulings for about 50 other coal plants that have made similar requests for more time to comply with its rules for coal ash ponds.

Plants that have sought extensions include the two 1950s-era coal plants that House Bill 6 requires Ohio ratepayers to subsidize. Of those two plants, the agency issued a proposed denial on Jan. 11 for the Clifty Creek plant. The Kyger Creek plant’s extension request is complete, but a draft determination has not yet been made.

This article first appeared on Energy News Network and is republished here under a Creative Commons license.