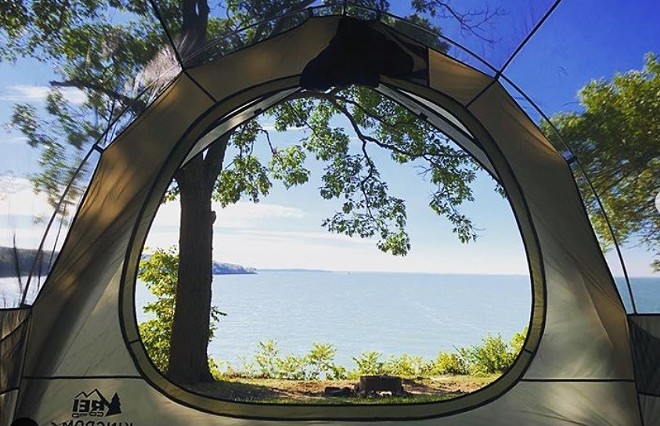 Our pals at Outside have assembled a subjective list of the best campgrounds in every state and selected South Bass Island State Park for Ohio.

"The campground at northern Ohio’s South Bass Island State Park has a lot going for it," reads the Outside write-up. "There’s the shade from a grove of massive oak trees, the view of Lake Erie from the campground’s perch atop a 40-foot-high limestone bluff, as well as a swimming beach and boat launch, all wrapped up in classic Great Lakes wilderness. Your camp will be only two miles from the mainland in Lake Erie, best explored by kayak or boat."

We're not really in a position to object, but we note for the record that taking a ferry to one's campsite is perhaps an acquired taste. Likewise the proximity to Put-in-Bay — the campground is less than two miles from downtown on the island's opposite side.

But the views from the bluffs and the plethora of family activities make it a solid option for a weekend trip. (And even with the ferry ride, it's only about two hours from downtown Cleveland.)

In other camping / state park news, Hocking Hills has opened its wow-worthy renovated new lodge, with 81 guest rooms available for those who don't like roughing it in a tent. (The vistas are said to be prime.)

And if you're a fall camping fiend like us, we've got a list of 30 Ohio State Parks  to visit, virtually all of which are poised for prime leaf-peeping these next few weeks.