Proposed Fee on Uber, Lyft to Prevent RTA Fare Hike — a Great Idea — is Impossible Thanks to Preemptive State Law 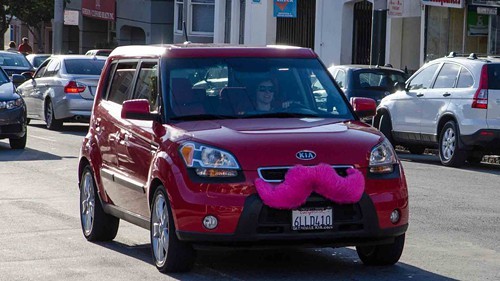 Yesterday, Cleveland.com reported that Clevelanders for Public Transit had proposed a $0.27 fee on rides taken with app-based ride-sharing services like Uber and Lyft (Transportation Network Companies, or TNCs, in the lingo).

The fee, said CPT's Akshai Singh, would preclude the necessity of an RTA fare hike in August. That'd be helpful, seeing as the region's transit system is in financial peril, diving headlong into a death spiral that looks like this: lost revenue from taxes on Medicaid managed care >>> reduced service and increased fares (an attempt to recoup some of the lost revenue) >>> fewer riders >>> less revenue >>> reduced service and increased fares, etc.

This has been well-publicized. Singh acknowledged, when he proposed the TNC fee to Cuyahoga County Council, that such a fee would hardly plug the financial hole. But the $3-4 million it could generate annually would take the burden off riders, who account for roughly 16 percent of RTA's annual revenue and who already endured a fare hike in 2016.

The TNC fee is an excellent idea, and is in fact modeled after a similar fee in Chicago. But in Ohio, the fee is impossible, thanks to statewide legislation that specifically preempts it.

"It is the intent of the [Ohio] general assembly to preempt any local ordinance, resolution, or other law adopted to license, register, tax, or otherwise regulate [Transportation Network Companies]," the Ohio Revised Code (ORC) states in its chapter on the subject (4925). The ORC does allow for local airports to assess a fee, and in Cleveland, via the city charter, that fee is set by the Board of Control.

The legislation was passed in 2015. It immediately nullified an ordinance in Columbus that officials there had worked on for nearly a year.

What's odd is that no one in Cleveland seemed to be aware of it. No one, that is, except Uber.

When Channel 19 reported on the proposed fee yesterday, RTA itself said that the fee would require passage by Cuyahoga County Council. Representatives on county council were intrigued by the idea of the fee, but said they'd need to consult with RTA and were curious about the transit agency's long-term financial plan. Even Lyft, a TNC that the state legislation protects, was unaware. A spokesperson told Channel 19 that the $0.27 fee would be borne by passengers, increasing the cost of rides.

Only Uber directed Channel 19 to the relevant state regulations. That led CPT to suspect the language in the Ohio Revised Code had come from Uber directly.

Akshai Singh told Scene that right now, CPT is trying to ask the state how it can consider transit a "local issue" — Ohio certainly has no interest in funding public transit from state coffers — while also believing that rideshare constitutes an issue of statewide interest.

"Despite transit being a local issue," Singh wrote to Scene, "state constitution and law both uniquely constrain local government with any ability to manage it, and pretty much attack the civil rights of anybody without access or ability to drive a car.

"Ultimately," he continued, "CPT is committed to finding dedicated revenues, locally and with partners statewide, for fare relief and restored services for riders."

That's a noble, if perpetually uphill, battle round these parts. Singh is right to note that the state has put cities in an impossible position. It won't fund public transit, but it also won't let cities creatively find revenue streams to fund it themselves. It has sentenced public transit to death.