Used to be, back before ex-mayor Mike White had his goons harassing bars out of business on the East Bank of the Flats in the ’90s to make way for The Future, Cleveland’s riverfront entertainment district had the highest bar-to-drunk density from New York to Chicago. But then three high-profile drowning deaths went down in a month, and it wasn't long before most of the East Bank would go dark, food for the wrecking ball. 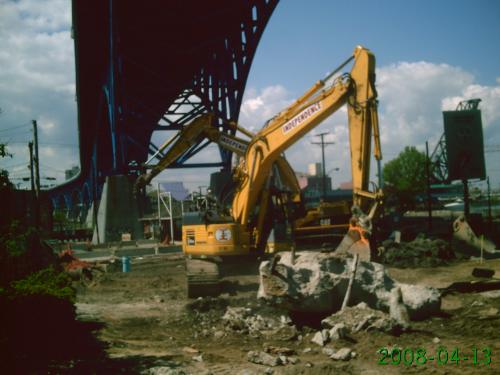 Don’t say you hadn’t noticed: While the West Bank has been electrified at night going on more than a decade now, the East Bank, where Old River Road was once our own little Bourbon Street, is mostly an industrial wasteland of rubble piles, gravel roads and chain-link fences. This is the view from the West Bank today, all this splendor just a water-taxi-to-hell away.

“It makes me feel off-balance,” says Tom Newman, executive director of the the Flats Oxbow Association, about the lack of symmetry today at the mouth of the Cuyahoga.

But help is on the way, at least the first trickles. Developer Scott Wolstein announced last fall that he would stall his $400 million mixed-use redevelopment here until the economy improved, but that didn’t stop the flow of public money to start getting all the infrastructure work out of the way. About $4 million in loans and grants from the city, county and state have been awarded for brownfield remediation. And the entire sewer system is being overhauled, as well, complete with a new pump station to service the entire area, including the Warehouse District, said Nancy Lesic, Wolstein’s spokeswoman. (The sewer work was mandated by the feds before the redevelopment project was even announced.)

“So, if anything, the Flats East Bank project moved up the timing of that work,” she said.

And worry not: The economy will rebound, and the East Bank will live again — maybe not on the back of a convention center, but maybe a casino. Anything would be better than this.