Report: Post-Recession Cleveland is in Worse Economic Shape than Detroit, or Anywhere Else 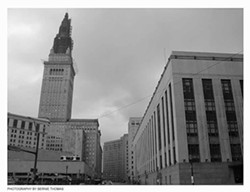 Photo courtesy of Berniethomas68 via Wikimedia Commons
File this away in the "Surprising and Troubling" folder of your brain.

Although there are a lot of tangibles that suggest otherwise — LeBron is back! Downtown is under construction! The Republican National Convention! Did we say LeBron! — the region is still struggling to regain economic footing after the global economy imploded with the Great Recession. The extent, however, of that struggle might be alarming to you. The New York Times is reporting on a new study that places Cleveland firmly at the bottom of the heap.

The new number crunch, performed by the Economic Innovation Group, focused on the recovery numbers across the country from 2009 to 2013 , zeroing in even on the zip-code level. The result is the Distressed Communities Index.

So how are these statistic being measured? Seven metrics contributed to the ranking:

The real gut-punch here is how this tracks nationally. Post-recession, the parts of the country that were better off to begin with shot back to economic prosperity, and even jumped to higher levels. The bottom of the group — C-Town included — have been left behind.