RTA Responds to This Week's Scene Story on RTA 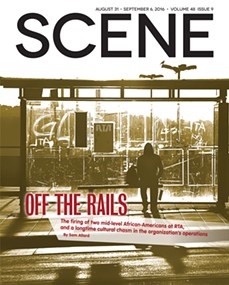 In a statement delivered to Scene Wednesday afternoon, RTA said they strongly disagreed with the "erroneous and misleading characterizations" depicted in our feature story about RTA operations, published Wednesday morning.

RTA took particular exception to allegations related to human resources at the Central Bus Maintenance facility. We quoted anonymous current employees and former employees who alleged that RTA's hiring policies weren't being followed. It was alleged, for instance, that job descriptions were being changed to align with credentials of desired candidates, and that employee hiring panels weren't ranking candidates objectively.

The argument RTA made to Scene today was one that they have been making throughout our reporting. They'd chastised us for taking seriously "rumors" from "disgruntled employees."

"We follow policies and a process that demand we hire and promote based on experience, ability and potential," Wednesday's letter read. "Any reports to the contrary, based on rumor not fact, are an insult to the worthy RTA employees that the Scene story purports to defend."

We must note that we repeatedly sought to corroborate our information via public records requests. But beyond two insignificant documents (one related to executive compensation and another which delineated the municipalities-of-residence of top employees) RTA has not provided any to us. They've advised that their small legal team has been overburdened with other requests.

RTA alleged that our story included "a significant error, indicating that top management employees in the Operations Division are mostly white."

Nowhere in our story did we make such a claim. On the contrary, we said that the operations division at large — the workforce that the Deputy General Manager of Operations oversees — was "predominantly black."

The line RTA may be referring to is the following: "And even though there's currently almost zero African-American representation in CBM management..." That phrase we still believe to be true. The story, after all, dealt foremost with allegations of misconduct at the Central Bus Maintenance Facility (CBM).

As we mentioned in the story, we intentionally refrained from publishing specific names and positions tied to allegations of HR misconduct. And we will continue to refrain from publishing that material until we receive corroborating documents. But we must mention once again that Ohio Sunshine Laws stipulate (pg. 15) that public records must be produced in a "reasonable amount of time."

RTA also alleged that we erroneously referred to the west-side bus district director as white. Though we said that the city of Cleveland's historic segregation was "dramatized in the personnel" of RTA's East (Hayden) and West (Triskett) garages, we did not reference the director directly. We certainly did not refer to her by name or race.

We agree that across the organization, and indeed, in many management positions, RTA has hired a wide range of diverse, qualified employees. The awards they mention in the early part of their letter would seem to corroborate those efforts.

Full text of RTA's letter below:

RTA strongly disagrees with the erroneous and misleading characterizations of the Greater Cleveland Regional Transit Authority and our employees, as depicted in Scene’s August 31, 2016 article.

The facts are:
1. RTA has received numerous awards from independent organizations for significant achievements in diversity at every level of the organization, including for Senior Management Diversity, Board Diversity and overall Employment Diversity. RTA will be receiving yet another award for employment diversity during the upcoming annual meeting of the Greater Cleveland Partnership by the Council on Economic Inclusion.

2. RTA has been well recognized for its leadership, success and expertise – by independent, outside observers and experts. The Partnership for Excellence, a three-state organization dedicated to recognizing and rewarding high-performing organizations, recently gave RTA its Silver Award for Commitment to Excellence. That made RTA one of just nine organizations in the Ohio-Indiana-West Virginia region to receive the honor. RTA has been named a SMART 50 organization by Smart Business Magazine. And RTA’s financial discipline and professionalism have helped us earn the Outstanding Budgeting Award from the Government Finance Officer’s Association (GFOA) for 28 consecutive years, as well as the Achievement in Excellence in Financial Reporting award for our Comprehensive Annual Financial Report (CAFR) for the last 29 years. We also have been recognized by the Auditor of State in each of the last two years with his Award of Distinction.

3. We take strongest exception to the inferences and hearsay in the story – with no documented facts – about RTA’s hiring and promotion decisions. We follow policies and a process that demand we hire and promote based on experience, ability and potential. Any reports to the contrary, based on rumor not fact, are an insult to the worthy RTA employees that the Scene story purports to defend.

4. The story included a significant error, indicating that top management employees in the Operations Division are mostly white. The fact is that five out of the six top District Directors, who report directly to Deputy General Manager of Operations Michael York, are African American. That includes the west-side bus district director, who was erroneously referred to in the story as being white. In addition, four out of the five members of her management team are also African American.

5. Many other inaccuracies in the story are related to employment issues that are currently in litigation. Due to that litigation, RTA is not at liberty to discuss the details.