Savage Love: End the Sexless Relationship Now Before It Gets Messy and Painful 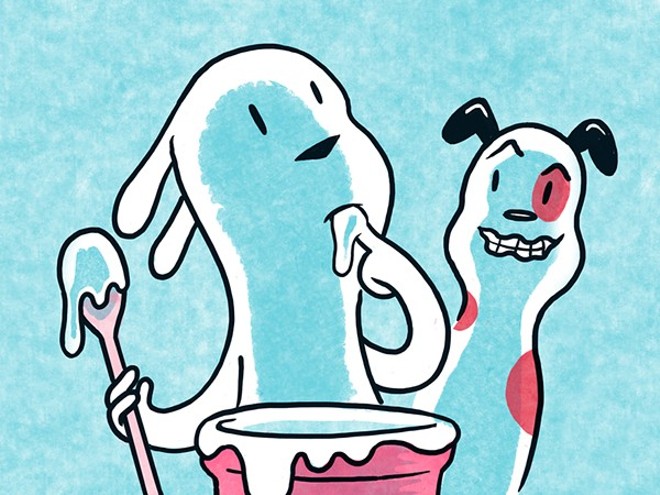 Something is bothering me and I don't know where else to turn. I'm a bisexual man. I've been married to a great guy for the past six years. Despite COVID, we gathered safely for an outdoors Thanksgiving dinner with my family. My mom, my brother and sister-in-law, and my adult nieces and nephews and their partners were there. Each household contributed to the feast, and we had a wonderful evening. While my husband and I were snuggling in bed later, he said that my casserole was a big hit thanks to the "secret ingredient." When I asked what he meant, he informed me that he had deposited my come from a blowjob he'd given me earlier that day in my half-finished casserole. When I asked why he did this, he said he thought it was hot and he was aroused watching my family ingest it. To me, this seems a bit twisted and feels like a deeply disrespectful act toward my family. Now I cannot sleep, and it is impossible for me to think of anything else. I wish he had never told me. I am writing to you as I don't know where else to turn.

Some letters you suspect are fake, some letters you know are fake, and some letters you hope are fake. I wish I could say this letter fell into the second category — a letter I knew to be fake — but I once got a letter from a man who would excuse himself at dinner parties, quickly rub one out in the bathroom, and then dip the bristles of his hosts' toothbrushes in his semen. (That was 20 years ago, and I still secure my toothbrush in a secret, undisclosed location whenever we have company.) So as much as I wish we lived in a world where something like this could never happen, CASSEROLE, we sadly don't live in that world.

Then again ... impromptu blowjobs sometimes happen, CASSEROLE, and they sometimes happen in kitchens. So I suppose it's possible your husband interrupted you while you were making a casserole and then quickly leaned over and spat your load into your casserole and managed to give it a quick stir ... without you noticing the spit or the stir? Sounds improbable ... but I suppose your husband could have created a diversion that took your attention off him and that mouthful of come and your casserole long enough to execute the spit-and-stir maneuver undetected. Perhaps he pointed at something outside the window or tossed a flash-bang grenade into the dining room.

But even if he did all of this — blew you, didn't swallow, created a diversion, spat your semen into a casserole you planned to share with your entire family — would he tell you about it? The guy who was glazing his friend's toothbrushes didn't brag to his friends about it. He wrote to me about it, described it as a compulsion, and asked me how to stop. That your husband would be so clueless as to think you wouldn't be revolted and upset by this is, if you'll forgive me, a little hard to swallow.

Still ... your nieces and nephews are adults ... so it's possible you and your husband are getting up there in years ... and he could be suffering from early-onset dementia; inappropriate sexual behavior and poor impulse control can be early symptoms.

So on the off, off, off chance this actually happened, CASSEROLE, here's my advice: If your husband spat your load into a half-finished casserole and then watched your whole family consume it and then assumed you would think it was hot, CASSEROLE, then you absolutely, positively need to divorce him. Let us count the ways you can't trust this man: you can't trust him with your semen, you can't trust him not to feed your come to your mother, you can't trust him around your siblings and nieces and nephews. You can't even leave him in the company of an unaccompanied casserole. So unless you looked into his eyes on your wedding day and thought, "This is a guy who would feed a woman her own son's semen and I'm fine with that," your husband isn't the "great guy" you thought he was. He's a monster and what he did is unforgivable, even criminal. Divorce the asserole. You might want to consider calling the cops and pressing charges for sexual assault — here's hoping you saved some of the casserole for DNA testing — but you'll have to weigh involving the police against burdening your mother with the knowledge of your Thanksgiving casserole's secret ingredient.

P.S. A casserole is really more of a side dish at Thanksgiving, isn't it?

Forgive my English. I write from Italy. I'm a quarter of a century old, and I have been with my girlfriend for seven years. I can't tell you how long the "sex high" lasted — the time when she wanted to have sex as often as possible — but it was maybe three years. Now if she's stressed, if we are not in a bed, if she hasn't just shaved her legs, if she's just woke up, if she's nervous for any reason at all, she doesn't want to have sex. I'm not one of those men who thinks exclusively about his own pleasure. I have asked her if she has any fantasies. She does not. I have asked her if I should be doing anything different. She says not. She doesn't masturbate, she doesn't watch porn. I purchased a sex toy for us. She will not touch it. And when I try to talk to her, she says that her sexuality is none of my business. I am miserable. I don't know what to do. She says I am " fixated on sex" and that there is more to life than that. I jerk off a lot, of course, which she only just started to accept. At first, she considered it equivalent to cheating. Is it wrong to end a relationship of seven years because of a matter of different views on sex? I love her so much and leaving would be hard. Please help me.

Forgive my bluntness: Either your girlfriend never liked sex all that much or, after seven years, she's no longer excited by sex with you. If she were willing to talk about it, WHY, you might be able to do something about it; you might be able to revive your sex life by trying new things together, experimenting with toys, having adventures. But she's made it clear she's not interested in discussing things, much less doing things. And while she doesn't think her sexuality is any of your business, she clearly sees your sexuality as her business, e.g., until recently she thought you were cheating on her when you jerked off ... which is kind of nuts, considering how infrequently she wants to fuck you.

There's nothing wrong with ending a sexually exclusive relationship when the sex doesn't work and your partner couldn't care less that you're unhappy and only grudgingly allows you to masturbate. As much as you love her, it's not working and it's only going to get worse. You're at once every two weeks now and will soon be down to once a month, then once every three months, then once a year. Eventually you'll cheat on her out of sheer desperation and the breakup won't just be painful, WHY, it will be messy and painful and you'll be cast as the bad guy. Don't wait for your dick to slam itself down on the self-destruct button. End it now.

P.S. Your English is so much better than my Italian!

A personal note: Allena Gabosch was a towering figure in Seattle's sex-positive community. She co-founded Seattle's Beyond the Edge Café, which quickly became a warm and welcoming home for Seattle's queer, kink, and poly communities. She went on to lead Seattle's Sex Positive Community Center, aka "The Wet Spot," and helped launch the Seattle Erotic Arts Festival. She was a gifted public speaker, a tireless advocate, and a hilarious storyteller with a giving and generous spirit. She also made the best chocolate-chip cookies in town. Allena will be missed and she will be remembered. My condolences to her many friends and many families.