Savage Love: My Husband Wants an Open Marriage, But Not For Me 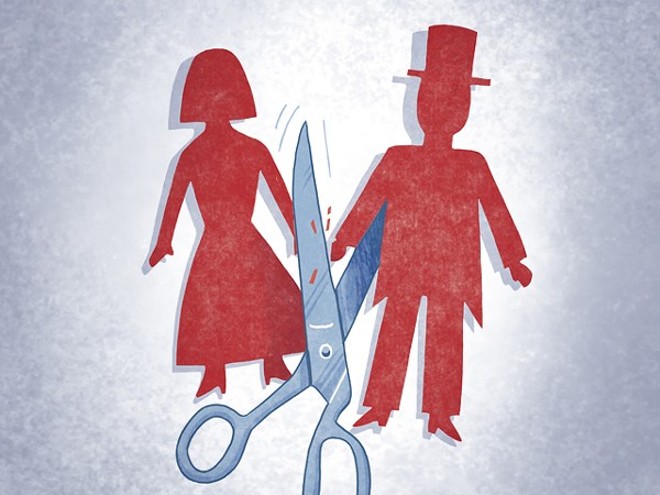 I've been married for 30 years to the same man. I have dealt with his tantrums, his screaming, and his fits. He's always had anger-management issues. He strangled me once a few months after our son was born and never did it again. I would have left otherwise. He's had relationships with other women but always swore it was just online. Then, a few years back, I got into an online relationship with someone. I never actually met this person, just as my husband claimed he'd never met the women he was talking to online. I had opened up to this person about our troubles, and I talked about my husband's anger issues and some other private things. This person encouraged me to have an affair, but I kept putting him off. Finally, I told him I did it, I had an affair, it was great, etc. It wasn't true, but it seemed like that's what he wanted to hear. About 30 minutes after I told him, I got a call from my husband! This person had sent it all to him! All of our conversations, everything, every detail. My husband flipped out, but we worked it out and moved on.

Then a few months ago, right at the start of the pandemic, I found out that my husband has been speaking to other women. I also found out that he's been meeting other women in hotel rooms in other cities, and all this time I believed him about never meeting with anyone in person! He claims he has erectile dysfunction, but it was clear from the messages I saw that he is having sex with these other women. So he's somehow fucking other women despite the erectile dysfunction that prevents him from fucking me?!?

I'm beside myself because over 30 years we built a life together, and now I don't know what my future is going to look like because of this. I can't provide for myself monetarily. I still work full time, but if I lose this job or retire, Dan, I will have nothing. And we both have medical issues. I don't want a divorce because a secure future for both of us really does hinge on us remaining together. I know for a fact that he's still seeing these women while forbidding me from having even online conversations — to say nothing of relations — with another man. Neither of us can make it on our own. I don't know what to do. Why wouldn't he want an open relationship?

Your husband doesn't want an open relationship, DISCORD, because he doesn't want you to have the same freedom he does. And while he doesn't want to be sexual with you for reasons that have nothing to do with erectile dysfunction, he doesn't want you seeking sexual attention — much less sexual fulfilment — in the arms or inboxes of other men. Which means your husband sees you not as a human being like him, i.e., a person with needs and feelings and agency, but more like a car he keeps in his garage and refuses to drive and won't let anyone else take for a spin.

You're not a car, of course, and you're not his property. You were also faithful to him even as he cheated on you — even after he assaulted you — and you stayed in this marriage despite being deprived of sex and other forms intimacy. But even if you guys had been fucking on a daily basis for the last 30 years, DISCORD, even if your husband wasn't an abusive asshole with anger issues, you would still have every right to indulge in sexual fantasies that don't involve your husband and every right to explore those fantasies on your own time. Partnered or not, monogamous or not, we're all entitled to a zone of erotic autonomy.

You say divorce isn't a viable option for you, DISCORD, so I'm gonna recommend a different d-word: detach. Make peace with your circumstances and the best of your living situation. Don't go searching for evidence that your husband is cheating on you — just accept that he is. Don't feel the need to confront him about his fucking hypocrisy, just accept that he's a huge fucking hypocrite. And then, DISCORD, just like your husband, go and do whatever and whoever you want. You don't need his permission to seek attention elsewhere. And if being honest about the attention you get elsewhere upsets your husband — if being honest swapping dirty texts with other men makes your husband and your homelife unbearable — then don't be honest about it. Just as he made an effort to be discreet in order to hide the scale of his cheating and his hypocrisy from you, DISCORD, you can be discreet in order to avoid conflict and drama.

Get back online, DISCORD, go make a new friend. And just because that last guy turned out to be a sadistic asshole who drew you out in order to blow up your life, that doesn't mean the next guy you meet online is going to be a sadistic or vindictive asshole. Billions of people get online every day to chat with strangers, and millions of people share explicit fantasies with strangers every day. While revenge porn is definitely a thing — and definitely a crime — it's almost always jilted IRL lovers who lash out like the way that asshole did. If it was even remotely common for people to be exposed to their spouses the way you were exposed to yours, DISCORD, if it happened even .01% of the time, we would hear about constantly. We don't because it isn't.

But to be on the safe side, DISCORD, you might want to keep it anonymous. Don't share your real info with someone you only wanna swap hot fantasies with and never intend to meet in person. And when your husband is being an asshole or just generally getting on your nerves, DISCORD, you can fantasize about the statistical likelihood that you will outlive your husband by many years. Because orgasms aren't the only sweet release.

I just read your advice for CATMAN, the person who asked if there was a name for his specific and newfound fetish: He wants to marry a submissive bisexual guy and then pick up and dominate submissive women together with his guy. As I read it, I wondered is this a sexual fantasy or is it a fetish? Then I wondered what the difference is between a fantasy and a fetish. Is there one? Does it matter? —Knowingly Investigating Newly Kinky Yearnings

What CATMAN described — what CATMAN was looking for — was a relationship. He was fantasizing about his perfect partner and wondering if he was out there somewhere. Since literally everyone does that, KINKY, I wouldn't describe fantasizing about a perfect partner/partners as a fetish or a kink. Vanilla or mildly kinky or wildly kinky, we all want that perfect match, i.e., a person or people whose sexual desires and/or relationship goals parallel our own. And a lucky few manage to find someone who comes really close.

People don't just fantasize about sex, of course; people fantasize about dream jobs, dream vacations, dream weddings. (Wedding fantasies aren't about who you're marrying but how you're marrying them, e.g., a destination wedding, a traditional wedding, a non-traditional wedding, etc.). But when it comes to sex, KINKY, fantasies are best understood as scenarios or situations that incorporate important elements of a person's sexual desires — desires that may involve kinks or fetishes or may not. Think of fantasies as sexy little movies we screen for ourselves in our heads and kinks or fetishes as optional plot points and/or props.

The natural follow-up question: What's the difference between a kink and a fetish then? While people often use those terms interchangeably, KINKY, they mean different things. Dr. Justin Lehmiller recently unpacked the difference on Sex & Psychology (www.lehmiller.com): "Kink is a very broad concept that encompasses pretty much any form of sexual expression that falls outside of the mainstream. This includes the eroticization of intense sensations (such as mixing pleasure and pain), playing with power differentials, deriving pleasure from inanimate objects, role playing, and more ... [whereas] fetishes involve heightened attraction to certain objects (like boots and shoes) and/or body parts beyond the genitals (like feet and armpits)."

So all fetishes are kinks, but not all kinks are fetishes. I hope that clears things up!