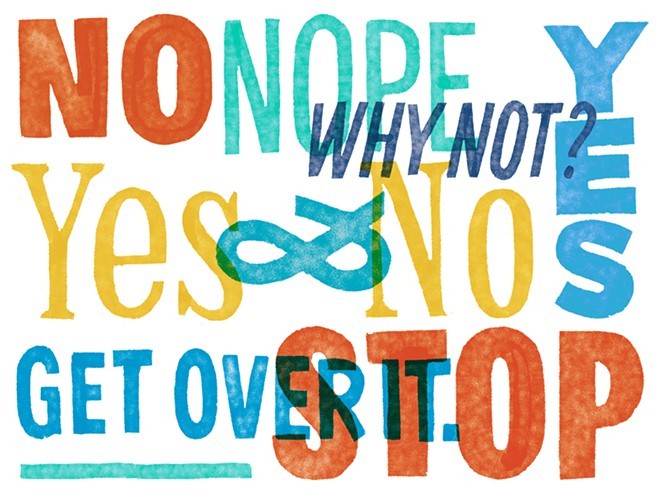 Joe Newton
Sir, this is a Wendy's. (Full disclosure: this isn't a Wendy's. This is a sex-advice column.)


I'm a very sexual cis male in his thirties. Three years ago, I met this woman who just blew me away. She is eight years older, extremely beautiful, intelligent, and funny. I came onto her early on and she told me straight up that she was asexual. She likes kissing, cuddling, and solo masturbation, but that's it. She says intercourse doesn't do anything for her. To keep a relationship alive in the past, she would go through the motions, but she has no interest in doing that anymore, so I moved on. Since then, we got to know each other better and I have fallen in love with her. Last night we had dinner and I started thinking aloud how we might make a relationship work. I suggested that I could watch her masturbate, and maybe we could have an open relationship. She said it was out of the question. She admitted that when she first met me, she liked me, but now she loves me as a friend. She says there's no chance that this could work, and we should keep things platonic. She doesn't even want to kiss and cuddle me, as she fears I would get "worked up" and she would have to reject me. We got into an argument, and she got angry with me. I love her. I want to spend every moment with her. I sincerely believe we could make this work. How can I convince her?

You already have your answer, SMILE, and that answer — her answer — is "no."

I'm not having sex with my best friend's husband, but we're doing something my best friend would probably find objectionable: I'm letting his husband drink my piss. The first time it just kind of happened. We're able to rationalize what we're doing — my best friend isn't into piss and I'm a "safe" person to do it with in that I'm not going to ask him for more — but it does involve putting my dick in the mouth of my best friend's husband. I was the best man at their wedding, and I feel guilty about this. I'm also married, but my husband and I have an agreement about outside games. Maybe I just need you to tell me to stop.

—Gay Urinal Is Lying To Spouse

Second, the obvious follow-up question: How'd that happen, GUILTS? Unless your best friend's husband was wearing a ridiculously convincing urinal costume at a Halloween party and you were on mushrooms, it didn't just happen. You did it. Even if he was in a convincing urinal costume and you ate all the mushrooms, you did it. You won't be able to stop doing this if you can't be honest about how you started.

My friend started dating a girl eight years ago in college and broke up with her a year later. They have no relationship at all now. They don't even converse. I have been in love with the girl in question since the first day I met her. I was going to ask her out years ago but before I could she was dating my friend. I recently asked her out and we are now dating but none of our friends from back then know. I want to spend the rest of my life with her. I vibe with her like no one else. Do you think it's right to be with her? Or am I doing wrong to my friend?

Your friend broke up with this woman — the woman you want to spend the rest of your life with — seven years ago. He doesn't own her, he doesn't have eternal dibs, and if he can't be happy for you, he's not your friend. And if you're feeling like a bad friend, maybe backing up and re-reading GUILTS' letter will make you feel better.

My partner of twenty years and I recently agreed to open our relationship. There's an acquaintance I've had a crush on since high school. I don't know his situation — if he's partnered, monogamous, whatever — but we're in touch now and I have permission to approach him. But I'm nervous his answer will be no, and my fun fantasies — fantasies I've enjoyed about him all my adult life — will be tainted by embarrassment. The reward would be great, but the risk is huge. The possibility of a hookup with him IRL has been fueling my desire, which my partner has benefitted from, and I'd hate to lose that. What do you think?

Zoea is already a word — and, therefore, fair game in Scrabble ("a free-swimming planktonic larval form of many decapod crustaceans and especially crabs [with] fringed antennae and mouthparts") — but words can have more than one meaning, and I think ZOEA (pronounced "zo-EE-ah") is a nice addition to my collection of initialisms.

I'm a late-to-come-out lesbian and so is my sister. We both live in the same moderate-sized city in the Pacific Northwest and are currently both on the dating market. The trouble I'm having is that the pool of eligible women in our city is small and the chances of us dating the same person seems likely, which makes me feel icky. I even matched with my sister on a dating app! That experience prompted me to take a break from dating while I sort out a better strategy. I've been dipping my toes in the water of more national queer communities and want to attend The Dinah in the fall to connect with other womxn from outside our area. I don't want to hold back but getting too close to my sibling's sex life just feels gross. Any guidance?

—Looking Everywhere Since Bursting Out

I'm a straight 30-year-old guy. I live with my girlfriend of three years, we love and respect each other, and have very good sex. Unfortunately, sex is very satisfying for me until I have an orgasm. My orgasms start well, but they fade out toward the end, leaving me disappointed, because I consistently have better ones during masturbation. I have a plausible explanation: when I orgasm, I become very sensitive, and I cannot "spot-reduce" the stimulation very easily during intercourse. I've tried thrusting less, coming outside, breathing to stay relaxed, with and without condoms, etc., but the end result is always the same. I still enjoy my sex life but I'd like to be able to have my best orgasms while I'm with my girlfriend. Do you have any advice for me?