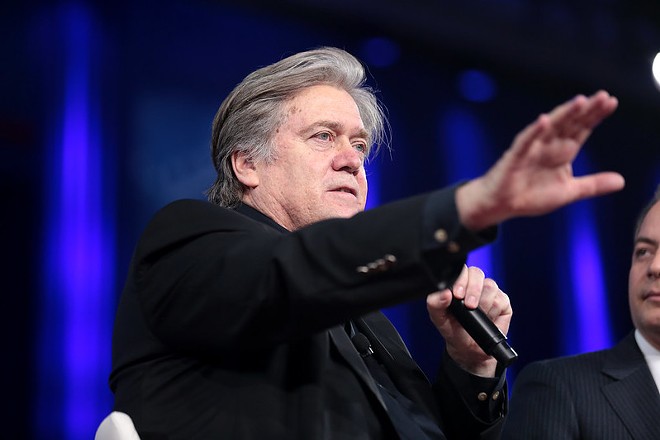 When former White House advisor Steve Bannon was arrested aboard the yacht of a fugitive Chinese billionaire last week, many saw it as another sign of wonton corruption within the Trump administration.

Yet economists saw hope. They’re calling this the “Summer of Swindle,” and say it may well rescue the U.S. economy.

According to the Treasury Department, scamming gullible conservatives is now the hottest sector of American commerce. Take Bannon and associates. They fleeced donors of $25 million meant to construct a U.S.-Mexico border wall. Instead it was spent on boats, luxury SUVs, jewelry and cosmetic surgery, with donors none the wiser.

Bannon was just the latest in a string of Republican figures duping their followers of serious coin. Economists see it as a high-growth industry with no ceiling in sight. Bannon’s, after all, wasn’t even the largest scam of the summer.

That honor goes to Ohio House Speaker Larry Householder. In June, he was arrested for racketeering, charged with taking $61 million from FirstEnergy to orchestrate a $1.3 billion taxpayer bailout money of the company’s nuclear power plants.

And the hits kept rolling.

The NRA has lost $64 million in the last three years, much of it owed to leader Wayne LaPierre. While he was supposed to be protecting America’s rights to shoot school children, he was actually burning members’ dues on private planes and country club memberships. Over the last three years, LaPierre spent $3.6 million on limousine service and travel consultants alone.

Then there was radio host Alex Jones, who was caught selling his listeners a toothpaste to cure Covid. MyPillow CEO Mike Lindell is peddling a toxic shrub as another coronavirus cure. In North Carolina, Rep. David Lewis, the state’s architect of voter suppression, pleaded guilty siphoning campaign money from donors. And at Liberty University, President Jerry Falwell Jr. is under investigation for using buying a NASCAR sponsorship in exchange for use of a luxury yacht. (Falwell resigned Monday amid a voyeurism scandal involving his wife and, naturally, the pool boy.)

According to analysts, this flurry of new business activity leaves hope for an economy plagued by business closures and raging unemployment.

“You couldn’t ask for better market conditions,” says Marc Mariner, a senior analyst with JP Morgan. “We have an abundance of amoral leaders matched by a limitless supply of uniquely gullible conservatives. If you can convince these people that Covid is a hoax after 177,000 deaths, you can really sell them anything. We’re telling our clients to bet heavily on conservative swindles through at least the first quarter of 2021.”

Of course, Republican leaders have long preyed upon their followers. In the 1980s, TV preacher Jim Bakker went to jail for defrauding parishioners, famously using the money on gold-plated bathroom fixtures. (He’s also been caught selling a fake Covid cure.) In the most enduring scam, President Ronald Reagan convinced supporters that by giving tax breaks to his wealthy benefactors, the windfall would eventually trickle down to the middle class. Forty years later, the scheme lives on, though the trickle has yet to show.

More recently, a judge ordered Donald Trump to pay $25 million to students defrauded by Trump University. He was fined another $2 million for using his veterans’ charity to pay business debts and campaign expenses.

Yet what impresses economists is the sheer volume of the latest flurry. The scams are growing in audacity. At the same time, conservative sophistication has plunged to record lows. Some expect the swindle industry to soon rival Big Tech in revenues.

“Just look at the Covid schemes,” says Nancy Soderholm, an economist with the Federal Reserve. “Toothpaste? Toxic shrubs? I won’t be surprised when Monsanto repackages Roundup as a facial moisturizer.”

In testing labs across the country, executives are seeing the same thing.
Amazon is now developing a product called “Magic Box of Air,” which is simply an empty box said to give its owner an instant mastery of Kung Fu, while working as an aphrodisiac on women. Fox News is awash with infomercials selling steak knives as home plastic surgery kits. Red Lobster will soon unveil an entrée described as “chum sautéed in a biohazardous alfredo sauce.”

“I don’t think we ever realized the enormous potential of the industry, myself included,” says Bernie Swanson, president of Parasite LLC, the country’s largest private equity firm. “You can take a discarded toilet seat, stamp it with a flag and call it ‘Patriot Necklace,’ and you’re doing sales of $100 million next week in Oklahoma alone. I’ve got interns combing landfills as we speak.”