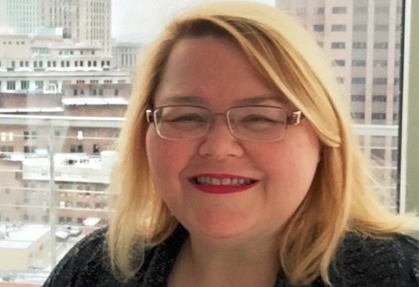 Karolyn Isenhart, a resident of Lakewood, will become the new executive director of the Cuyahoga County Democratic Party.

Congresswoman and Chairwoman of the County Dems, Shontel Brown, announced late last week that Isenhart will take the reins from Helen Sheehan, who served in an interim capacity for the past eight months. The Executive Director had been previously held by Ryan Puente, who resigned his post when he became the campaign manager for Justin Bibb's Cleveland mayoral campaign.

“Karolyn Isenhart is a committed leader for the Democratic Party and is dedicated to voter and volunteer engagement, electing Democrats to local, county, statewide and national office and organizing for issue campaigns including SB5/We Are Ohio," said Brown, in a press release. "We are excited to have Ms. Isenhart join our team."

Isenhart is a career project manager with a background in marketing, technology and fundraising. She most recently worked at Penton Media, (lately rebranded as Endeavor Business Media), where she produced webinars for the company's manufacturing titles.

She has been active in the county party for more than a decade, organizing campaigns, recruiting and training volunteers and, as the Lakewood City Leader and member of the Lakewood Democratic Club, coordinating with the state and national party and other local affinity groups. Isenhart serves on the Steering Committee for the Cuyahoga Democratic Women’s Caucus and is a member of Cleveland Stonewall Democrats.

Isenhart will begin her Executive Director duties in March.