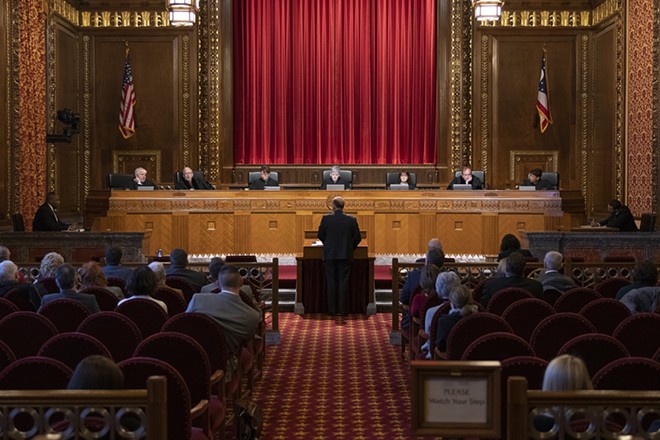 Lawyers for a woman who was repeatedly raped and sexually abused as a child argued Wednesday the Ohio Supreme Court should overturn or at least pare down a law that limits millions in damages a jury awarded her.

In 2005, Ohio lawmakers passed a “tort reform” law that among other provisions, sets a limit of $250,000 on non-economic damages, which are awarded to victims to cover more intangible harms like pain, suffering, stress, anxiety, etc.

Amanda Brandt was awarded $34 million in noneconomic damages after Roy Pompa, her friend’s father, abused her repeatedly over 18 months starting when she was 11. Court records show he would drug and rape her and record the abuse. Brandt won full damages for abuse that occurred before the tort reform law passed ($14 million), though the other $20 million in punitive damages for abuse after the law passed was cut down to $250,000.

She still won $100 million in punitive damages — which are only available because Pompa was convicted of a felony (17 counts of rape, five counts of kidnapping, 55 counts of pandering sexually oriented material involving a minor, and 21 counts of gross sexual imposition).

The Supreme Court has previously denied an effort to nix damage caps as they were applied to another child who was raped by her priest in Delaware County. Her $3.5 million in noneconomic caps was reduced to $350,000 (the law also creates a formula that can provide up to $350,000 pending economic damages like missed days of work and medical bills).

Brandt’s attorneys asked the court for one of two remedies. The justices could overturn the damage caps outright and restore juries with the power to set damage maximums, as opposed to state lawmakers. Or, the justices could determine that the trauma Brandt sustained should apply to an exception to the damage caps within the law available to people who become deformed or disabled by an injury.

Damage caps, he said, infringe on the U.S. Constitution’s right to trial by jury. It’s a jury that hears the facts of a case and decides what kind of penalty is appropriate.

“With a cap, you’re saying that that cap overrides that jury decision,” he said.

Pompa, via attorney Marion Little, said it’s untrue that anyone was denied a right to trial by jury. Brandt still won $114 million. The intent of tort reform, he argued, was to create more legal predictability and consistency, which it accomplished without infringing on anyone’s rights.

As for the reduced non-economic damages, Little said the evidence suggests Brandt has recovered. She still requires counseling, but she has a family, a job and stability and should be “applauded for her success” moving forward.

In court filings supporting Brandt, lawyers with the Ohio Alliance to End Sexual Violence criticized this line of thinking.

“[It] puts Ohio judges in the unenviable and morally fraught position of holding against child abuse victims the moments in their life where they have made progress — where they have taken the most basic steps to achieve normalcy despite the abuse they suffered,” wrote attorney Camille Crary in a brief.

Overturning Ohio’s noneconomic damage would significantly reshape Ohio’s legal climate in favor plaintiffs. It applies far beyond the narrow realm of child sex abuse and into products liability and other genres of lawsuits that can result in huge payouts, often from large corporations and institutions.

As such, the case generated tremendous outside interest. Attorney General Dave Yost argued the law should be upheld. He said it’s perhaps surprising — “some might even say callous” — that Ohio law limits available damages for a child victim of sexual abuse. But “foolish policy” is not necessarily unconstitutional, he argued. He urged lawmakers, as some have tried to do, to lift damage caps in claims against rapists. But that change should come from the legislature, not the Supreme Court, he said.

The Chamber of Commerce, which represents business interests, said the unpredictability of “runaway” jury awards creates huge risks for businesses. Ohio’s damage caps, its lawyers argued, are reasonable and within the mainstream compared with other states.

“The extremely sympathetic facts of this case should not blind this Court to the enormous consequences of that invitation: Invalidating the law or opening the door to a vague new exception will expose businesses, nonprofits, and others to unlimited and unpredictable awards and excessive settlement demands in personal injury lawsuits when no more than negligence is alleged,” its lawyers wrote.

One mystery in the case, homed in on briefly during oral arguments, is whether Pompa can even pay the $114 million judgement — let alone the additional $20 million if the court overturns the damage cap. Peck, during arguments, said the plaintiffs have not yet sought to collect from him until the court finalizes the issue.

In an interview after oral arguments, Little said there’s no evidence in the record suggesting Pompa can pay either $114 million or $134 million. He said the plaintiffs’ target is more likely the law and precedent than the specific case at hand.

Little — a prominent defense attorney currently working on high-profile, white collar cases — declined to answer whether Pompa is paying for his legal services.

“I think that the, as a practical matter, the plaintiff does not have a financial stake in the results of this case,” he said. “There may be others outside the case, such as the plaintiff’s bar, that have interest in this.”

Organizations representing trial attorneys argued the right to trial by jury and that jury’s autonomy to set awards for plaintiffs who have been harmed are inextricably tied. Juries, they wrote, are the fact finders in court cases — not policy makers.

“The General Assembly has not demonstrated a willingness to protect the right to trial by jury, nor is it the role of legislators to draw boundaries around the legislative power,” they wrote. “As a result, it falls on this Court to jealously safeguard that right and protect all Ohioans, not just those with the most lobbying power.”