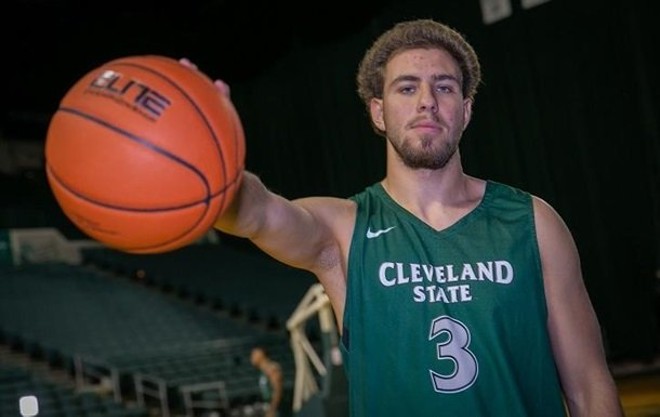 CSUvikings.com
Gregory Kolomoisky
The son of a Ukrainian oligarch with ties to Cleveland real estate played basketball, briefly, at Cleveland State University in 2018-2019.

The 6'4" Gregory Kolomoisky was enrolled as a "Sports Management" major and played inconsequential minutes in two games last season before signing with a Ukrainian pro club earlier this year.

Scene was alerted to the younger Kolomoisky's CSU connection by journalists from Ukraine. A TV crew from Kiev traveled to Cleveland last week to report on Igor Kolomoisky's acquisition of downtown Cleveland office buildings, via the Cleveland-and-Miami-based real estate firm "Optima Ventures."

The oligarch Kolomoisky is accused of siphoning hundreds of millions of dollars from fraudulent loans made by the bank he owned until its nationalization in 2016. These financial schemes are the subject of a massive ongoing lawsuit, on which Scene reported earlier this year.

Gregory Kolomoisky was born in Switzerland, one of several countries in which his father has residences. How he ended up at CSU is unclear. When Scene inquired about Gregory's presence on the roster, a CSU spokesman said that Kolomoisky completed a single semester at CSU and then chose not to return.

To basketball-related questions — Was Kolomoisky recruited? Did he try out? Was his spot on the team brokered, in some fashion? — the spokesman said the current Athletics Administration is "pretty new" and have no additional details.

After the election of Ukrainian president Volodmyr Zelensky earlier this year, Igor Kolomoisky returned to Ukraine after more than two years of self exile. He used Gregory's signing with a pro club there as a pretext for his homecoming from Israel. Gregory now plays for Ukraine's BC Dnipro, Igor Kolomoisky's hometown team.

There was widespread fear at the time of Kolomoisky's return that he would begin to exert influence over Zelensky, who, prior to the election, had played a president on a TV show that aired on a network Kolomoisky owned.

Kolomoisky had been living in Israel, where he also holds citizenship, after conflicts over the nationalization of his PrivatBank, the country’s largest commercial bank and the one he accused of using as his "own personal piggy bank."