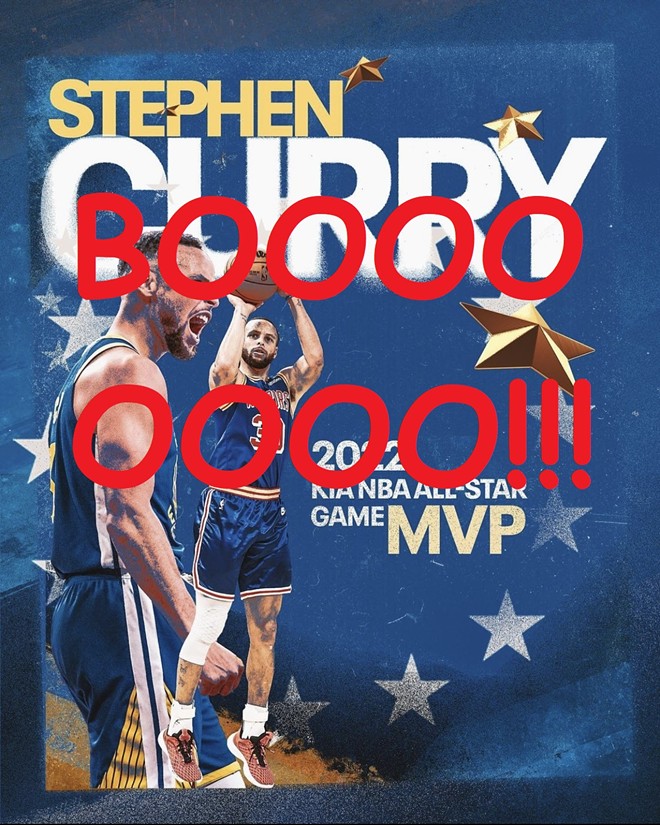 Mouthguard-tossing pipsqeak Stephen Curry won the NBA All-Star Game's Most Valuable Player award Sunday night and did so, I must bow my head to admit, deservedly. He drained more three point field goals than the rest of Team LeBron combined, in fact more than any single player in any single game in NBA history. And though it was LeBron who got the glory and the ovation for his fadeaway game-winner, it was Curry who led the team to victory by every other offensive metric in the meaningless yet spectacular showcase on the Cavs home court.

Like other NBA stars and organizations, Curry donned his philanthropic cap over the weekend and donated $108,000 to the Cleveland Metropolitan School District, a donation engorged by his on-court performance. Curry poured in a preposterous 50 total points and drained an unfathomable 16 total three-pointers, and then secured the MVP trophy to boot, all of which had corresponding dollar values.

Stephen Curry plans to raise money for the Cleveland Metro School District through his #NBAAllStar stats:

According to CMSD, Curry's donation will go toward youth basketball programming, particularly for students in middle school. The funding will also go toward a partnership between CMSD, the City of Cleveland's Parks and Rec Department and the Positive Coaching Alliance to provide training in that organization's "Double-Goal" coaching methodology.

To the extent Curry's donation helps out CMSD hoops, or encourages positive thinking in youth athletes, it's very nice. And as LeBron testified after the game, Curry's off-planet shooting range and sniper's precision make him among the most jaw-droppingly telegenic players in pro basketball history. There's no use denying it. The league has literally reoriented itself around a style of play for which Curry and his Golden State Warriors are still the dazzling prototype.

The same Golden State Warriors that blew a 3-1 lead to squander the 2016 NBA Championship.

This conversation already feels exhausting in its second 24 hours, but Cleveland fans have every right to continue booing Curry into oblivion every time he sets foot in Cleveland, every time he wriggles lewdly in our direction after a made basket, every time he appears on a commercial hawking Subway's customizable subs or dares to allude to "Akron" as something meaningfully connected to him. (He was born there, yes, because his dad happened to be playing for the Cavs in 1988, his only year in Northeast Ohio during a 15-year NBA career. I have no choice but to interpret the continual encroachment on LeBron's hometown as high-level trolling.)

Curry is an all-time great NBA player and the game's best shooter ever. Most Cleveland basketball fans are sophisticated enough to acknowledge his contributions in the abstract while also recognizing that the Golden State Warriors are a bona fide rival and that Curry, as their impish ringleader, must forever be treated with profound disrespect.

When rivalries are this intense, and players are this good, the booing becomes elevated. Curry is a player that many of us love to hate, a player who is fun to hate! (In moments of private darkness, one of my most cathartic therapies is re-watching Games five through seven of the 2016 NBA Finals and screaming obscenities at Curry and Draymond Green.) Suffice it to say, at the All-Star game in Cleveland, people were booing that MFer with smiles on their faces, and Curry was smiling too. There's a winking understanding during peacetime. WE HATE YOU AND EVERYTHING YOU STAND FOR, YOU PUNK! (But damn.)

The situation is favorably contrasted to the Browns v. Steelers theatrics, which, because I was never alive when an on-field "rivalry" was legitimate, often feels ugly and sad. You'd think the respective fan bases were Serbs, Croats and Muslims in Yugoslavia c. 1989-1995. It was never fun to watch the Browns get pummeled by the Steelers year after year and watch local fanatics prepare for these routs as if the Steelers gave a shit. It was never fun to hate Ben Roethlisberger, a bad and dour dude. It certainly was not fun to watch Myles Garrett get provoked by a racial slur and bash Mason Rudolph's head in, and then have local fans—partisans with Bernie Kosar tattoos who supposedly hate Pittsburgh by birthright—discuss Garrett's response in the language of criminal punishment. Even thinking about it makes my blood boil.

On the other hand, the four consecutive meetings between Cleveland and Golden State in the NBA Finals was an unprecedented clash of titans. Not even the Lakers and Celtics met four times in a row in the 60s or the 80s. The on-court collision, not to mention the collision of regional ethoses, made for legendary sports drama.

For local fans, Curry is the central villain in that drama. He is also an enormously paid professional athlete who understands that this drama is, in the end, entertainment.

"Are you not entertained?" Curry jeers, every time he drains a no-look three and grins.

"Absolutely not! You dumbass! You freak!" we scream, nodding our heads in ecstasy.