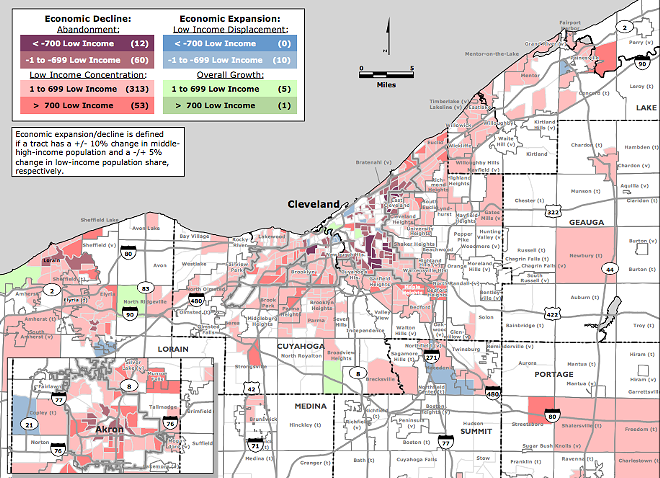 If there is one subject Cleveland likes avoiding — and by that we mean hearing anything about it — is the poverty levels and population loss that has been in Northeast Ohio for decades. If there is a study on how Cleveland ranks high on craft beer consumption or the restorative character of downtown chandelier placement, this city loves it. East side poverty levels, not so much.

A new report — American Neighborhood Change in the 21st Century: Gentrification and Decline — just released by the University of Minnesota Law School, examines poverty and causes in the country’s top 50 metro areas.  Its subjects of interest are the degree to which neighborhoods are experiencing economic growth, displacement of low-income people, concentration of poverty, and abandonment.

It is an easy read – with lots of data and tables for those who like that stuff. We won’t go into the specifics of all of it, but they do give a summary of each metro area. Here is what they say about the Cleveland/Akron area:

The Cleveland region features two central cities, Cleveland and Akron. The region’s neighborhoods are experiencing powerful economic decline and virtually no gentrification or growth. The only significant pocket of gentrification appears to have occurred in the Tremont area, and the number of people displaced is, on net, in the hundreds.

In Cleveland’s suburbs, declining areas are undergoing poverty concentration. But neighborhood decline is much more severe in the cities of Akron and Cleveland, where about 75 percent of population lives in a strongly declining area. In Cleveland proper, poverty concentration is less frequent than outright abandonment, and much of the city’s eastern half is growing poorer while losing low-income and middle-income population alike.


Jason Segedy, Akron’s director of planning and urban development, has a good post on this study on his very well-thought out blog on urban issues, "Notes from the Underground." He once again thinks Midwest big cities are getting too obsessed with “gentrification” (the Minnesota study makes that point as well), and how it is basically irrelevant in cities like Akron and Cleveland:

Rather than being subject to displacement by gentrification, urban residents who are both black and poor are far more likely to be left behind in neighborhoods experiencing widespread vacancy, abandonment, and disinvestment.

Instead of displacement by gentrification, what we are seeing in most cities could be described as displacement by decline - as black middle class residents, in particular, frustrated by the continued social and economic disintegration of their neighborhoods, are moving to safer and more attractive neighborhoods in the suburbs.

While the urban renaissance in a handful of neighborhoods gets all of the headlines, it is the rapid concentration of poverty and urban decline that is far more prevalent - and troubling.