Ted Diadiun's Prodigiously Ignorant Worldview Should Be on Life Support, Not on Cleveland.com 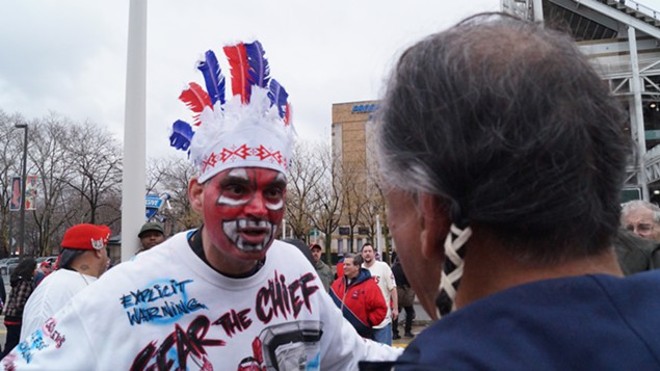 Sam Allard / Scene
In cities like Cleveland, Ohio, it's almost impossible to square the notion of Free Speech under siege, (as advanced by an omni-partisan battery of the nation's foremost intellectuals in an open letter this week), with the reality on the ground, in which wingnut columnists get to spout the deranged contents of their brains on a regular basis in the largest media outlets available.

#Cancelculture's online super soldiers have indeed taken to Twitter and Instagram to censure famous writers and thinkers for objectionable articles and thoughts. In some cases, these so-called mobs have produced real-world consequences, as when New York Times opinion editor James Bennett resigned after the tidal wave of outrage in response to his publication of an op-ed from Sen. Tom Cotton, which advocated deploying the U.S. military to quell racial justice protests; and which, shockingly, Bennett admitted he hadn't read before publishing.

In spite of recent controversies in that vein — which aren't much talked about outside of Twitter and national opinion pages — flesh-and-blood populations in cities all over the country are still subjected to the dumbest and most exhausting people alive, who remain uncanceled; indeed, who remain well-paid and widely read at their local dailies.

Have you heard of Ted Diadiun? He is the former ombudsman at the Plain Dealer and now serves as the resident right winger on the PD/cleveland.com editorial board, into which residency he has almost theatrically leaned. Every embarrassing "Get off My Lawn" column you've seen circulated beneath horrified emojis over the past several years was likely written by him.

Editor Chris Quinn frequently cites Diadiun's presence on the edit board as evidence of "balance." But Diadiun's columns, increasingly just complaints about his own perceived subjugation, are not recognizably political. They're just the ravings of an old white guy who dines out on delusions. Like climate-change denier Kevin O'Brien before him, Diadiun is well-regarded in old-salt journalism circles as an amiable colleague and careful line editor, but the schlock he serves up to the region is a foul stain on his employer's credibility and seriousness. (It is, however, living proof that Free Speech is alive and well.)

At issue this week for Diadiun is, once again, the Cleveland Indians, the MLB franchise which purports to be exploring a name change on the heels of the Washington football team purporting to do the same. In Washington, pressure came from the team's corporate sponsors, influential investors at FedEx and Nike having suddenly recognized they stood to profit off of publicly distancing themselves from a team whose moniker was a dictionary-defined racial slur, and paving the way, incidentally, for Caboodles of new merchandise.

The Cleveland debate has centered for years on Chief Wahoo, the team's racist logo. And though the team has gradually phased it out, elevating the "Block C" in 2013 and finally removing the red-faced caricature from team caps and jerseys before the 2019 season so they'd be allowed to host the All-Star Game, it remains Cleveland's highest-casualty battleground in the larger culture wars. Diadiun's Wednesday screed had as much to do with Wahoo as it did with a potential name change, and his whining is likely representative of the response locals can expect from folks in his camp, who simply cannot conceive of a world in which their comfort and personal attachments are not the only valid considerations.

"Tribe fans have prevailingly loved the brand and how it connects them to their childhoods, their families, and the history of their city," he writes. "Their embrace of Wahoo was an expression of affection, not racial dominance or belittlement. Despite the cancel culture mania that has had its grip on our nation now for some time, intention does matter. Much will be lost as we continue to allow Those Who Know Better to dismiss or reframe our good intentions."

He got to make that argument in 2013, but it's no good anymore. And if he ever bothered to spend a few minutes with the Native American groups who have protested the team's branding on Opening Day for decades, he'd be well aware of both the racial dominance and belittlement provoked by challenges to Wahoo support. It's grotesque.

As I've written in the past, sincere expressions of fondness for personal memories like Diadiun's, above, are absolutely barbaric in context. Consider the identical sentiment in reference to a German soccer club called the "Munich Jews" or a college athletics program called the "Ole Miss Cotton Pickers." It's unthinkable! I hope Ted Diadiun is as uncomfortable reading those words as I am writing them. It remains the height of self-absorption that local fans like him believe that they are the victims, that it is their history which is being dishonored, when a team named after human beings who were virtually exterminated hints that it may change the shape of the cartoon on its hats.

It's not worth refuting Diadiun's column point by point, because there's little chance of persuading folks so entrenched in their fringe views. (I will mention the irony, though, of Diadiun framing anti-Wahoo activists as a "noisy, powerful minority," when for years, Wahoo supporters argued that the name and logo shouldn't be changed because so few people objected.)

But it is worth mentioning that Diadiun deserves to be mocked and insulted for his terrible views. In a society with Free Speech protections, everyone is free to believe and express their opinions. In that environment, sometimes the only way to ensure that certain pernicious opinions — Holocaust denial, White Supremacy — don't gain the footholds that they have in recent years is to marginalize them. Most of these ideas are so patently absurd and racist that for years that marginalization occurred naturally. No one paid them any mind. Facebook and other platforms have allowed them to flourish.

There's a reason why people were so incensed about the New York Times printing an op-ed about using the U.S. military on its own citizens. Giving outrageous ideas space in important journals legitimizes them. In a similar way, giving worthless hacks like Corey Lewandowski prominent platforms legitimizes them. And that can be extremely dangerous.

Diadiun's views are of course shared by a ton of Northeast Ohioans, many of whom are our own family members. The reason why we have to scream at Ted Diadiun, while we might only gently encourage our grandparents to update their gear, is because Diadiun has an enormous platform. The publication and wide circulation of his ideas gives them currency. The ultimate goal is to change Wahoo supporters' minds. But if that's not possible, the secondary goal is to win the argument — which is of course about the dignity and health of Native Americans — so thoroughly that ideas like Diadiun's are recognized as morally and ideologically bankrupt, such that cleveland.com would reject an op-ed defending Wahoo and the Indians as readily as it would an op-ed defending blackface.

During a moment when many people are sincerely trying to become more anti-racist, institutions and corporations must also reckon with their histories with racism and ongoing racist practices. Getting rid of Cleveland's Native Mascot is an obvious step for a city that just declared racism a public health crisis. Diadiun's columns, in this historical context, are just the farts and gasps of a worldview in its death throes. Just like Wahoo and the Indians, his columns need to be taken off life support. It's up to Diadiun to decide how gracelessly he'll let them die.