LeBron James officially modeled one of the Cavaliers' new uniforms earlier this week. And ever since photos of the fresh jerseys were introduced last month, the internet has certainly had a lot to say.

As the NBA switched their uniforms from Adidas to Nike this offseason, every team got an updated look to their jerseys. For team's with classic jerseys, like the Chicago Bulls, Boston Celtics and Los Angeles Lakers, the design basically just changed from an Adidas logo to a Nike one, with maybe some minor font changes and the sizes of the lettering or numbering. The Cavaliers uniforms, however, underwent a major cosmetic change.

Let's take a look at the differences between their wine jerseys from last year and the new red ones. Here's LeBron in the new uniform, and starting center Tristan Thompson in the old wine jerseys: 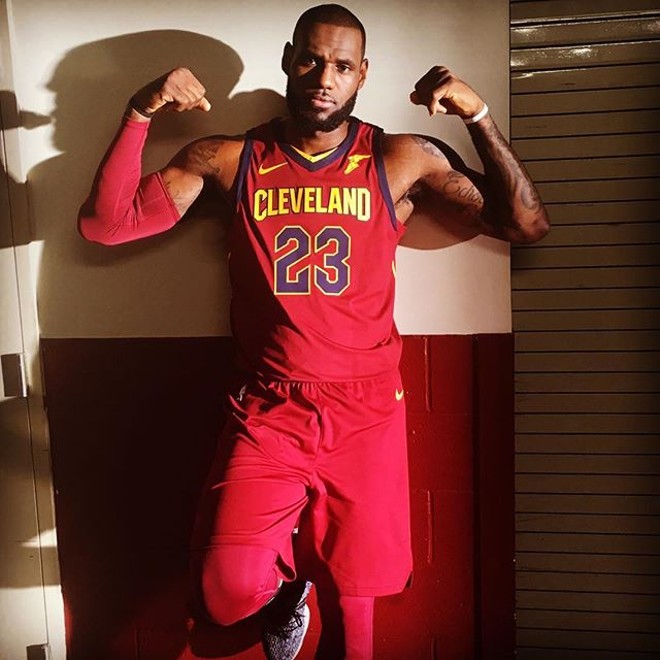 Cleveland Cavaliers Instagram
As you can see, the jerseys are completely different. The font on the lettering and numbers has changed. The Nike logo is clearly visible now, as opposed to Adidas hiding their logo on the old ones.

The biggest change is the coloring. The gold is pretty similar but the red totally changed. Since abandoning their blue and orange color scheme of the late '80s and '90s, they've mostly worn colors related to wine and gold, the original color scheme of the organization, dating back to 1970.

Their new jerseys appear to have dropped the wine in favor of more of a shiny, fire truck red, a color never worn before. The classic look is gone, replaced by something that has nothing to do with the Cavaliers history. The other noticeable change is the wingfoot Goodyear logo on the left shoulder, something we covered here, when the sponsorship deal was announced back in May.

Many NBA fans around the country were worried that sponsors on the uniforms would ruin how they look, but fortunately, the sponsors logos only take up a tiny portion of the jersey, for now at least. Compared to many soccer clubs around the world, where the sponsor's logo basically is the jersey, the NBA's sponsored jerseys could be a good deal worse.

That said, while the Goodyear logo was tastefully done, that doesn't mean the Cavaliers jerseys received positive reviews. In fact, most reviews have been negative. Haley O'Shaughnessy of the Ringer said here that, "The dated 'Cleveland' font is nearly the same, but accompanied now by 'CAVS' printed on the belt, added like a frantic, last-second garnish of green-bottle parmesan cheese on a dish that called for the real thing."

The Houston Chronicle ranked every new uniform, ranking the Cavaliers third worst, saying, "Putting navy blue numbers over the top of wine jerseys is an atrocity. What was wrong with gold numbers to go along with gold lettering? At least the Goodyear logo on the shoulder is tastefully done."

Cleveland Cavaliers Instagram
The Cavaliers' new white uniforms.
A common sentiment, echoed by Paul Lukas of ESPN's Uni Watch, was that the new white jerseys are decent, while the red ones missed the mark. He gave the white jerseys a B+ grade, while giving the red ones a C+, saying, "Nike has an odd habit of using dim lighting for many of its promotional photos, so it's possible that this uniform will look brighter on the court than it does on the internet. For now, though, it feels like a significant downgrade. The blue numbers will be hard to make out, and the longer "Cleveland" lettering just mean there's more of that typeface to contend with."

In addition to these two uniforms, the Cavaliers will unveil two or more alternate uniforms some time in the future. Hopefully, they'll be an improvement on what we've seen so far.