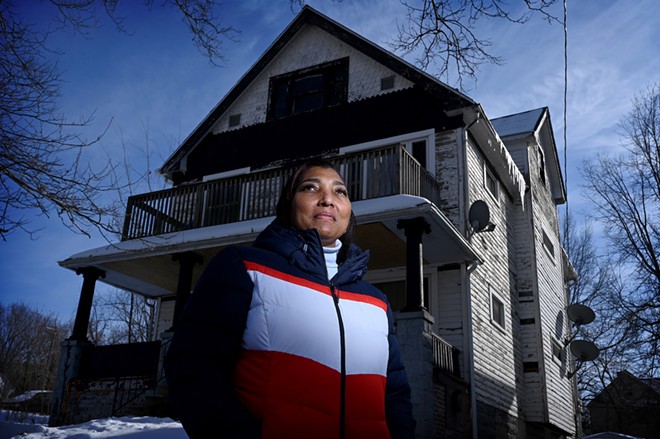 Photo by Tim Harrison
Tuesday Gibson outside her Buckeye-Woodhill home. Gibson didn’t complete Cleveland’s Exterior Paint Program, and she’s not alone. About 64 percent of applicants who were approved in 2020 and 2021 have not finished painting their homes.

Tuesday Gibson lives with her mom, Barbara, in a 107-year-old home in Cleveland’s Buckeye-Woodhill neighborhood. Gibson had hoped Cleveland’s Exterior Paint Program, which offers free paint and supplies to help residents repaint their homes and safely remove any hazardous lead-based paint, would provide enough support to give the home a fresh coat.

Gibson applied and was approved, but before ever prepping her house for painting, she realized the program wasn’t going to work for her.

“It was a lot of stipulations just to get the paint to do the job,” she said.

Gibson’s home never got a new paint job, a reality shared by many applicants.

The city’s goal for the program was to have 1,000 homes painted during the last two years.

In that time, 374 applicants — 37 percent of that goal — have completed the program, said Louise Jackson, commissioner of the city’s Division of Neighborhood Services.

Return of the paint program

The Exterior Paint Program was revamped “to help residents leverage these and other city services which can help protect their home investments, improve housing stock in our neighborhoods and create a better quality of life,” former Mayor Frank Jackson said in a 2019 press release announcing the program’s return.

City Council passed legislation and a budget of $521,000 per year was approved for paint and supplies, according to Commissioner Jackson. The city paid Sherwin-Williams Co., the primary vendor, $378,063 for paint and supplies, according to public records obtained by Cleveland Documenters. Bloom Brothers, the lone other vendor participating, received $2,558.

Council members discussed the program with Jackson and new Director of Community Development Alyssa Hernandez during the Feb. 28 General Fund budget hearing. Several council members asked questions to confirm the program process and said the cost of labor is an issue to address. Council Member Jenny Spencer said that partner agencies have told her they’ve stopped referring residents to the program because of the stress and frustration it brings residents.

“It’s not only rebuilding the program; it’s rebuilding trust entirely,” Spencer said in the hearing. “I actually had someone in the community tell me that this program has made residents’ lives worse.”

Hernandez said she’ll work to address gaps in the program. They did not allocate more money from the 2022 budget for the program at that time.

‘A lot of stipulations’

The city hit and exceeded its goals in terms of applications and approvals.

In the last two years,1,338 residents applied and the city approved 77 percent to participate in the program, according to Jackson. Most applicants were homeowners — relatively few were tenants — and predominantly identified as Black or African-American, according to city application data. The median income of applicants was about $15,750.

However, only 36 percent of those approved got their homes fully painted, suggesting complications came after residents were approved.

Residents told Cleveland Documenters the challenges they experienced including:


For Gibson, who rents one floor of her mother’s two-family home, doubts about the program grew after she was approved. She knew residents had to find the labor, whether that meant doing the painting themselves, recruiting family or friends or hiring professionals. But contractors who visited her home gave her an estimate of $3,000 to paint. And, they said, the siding had rotted wood that would need to be replaced before painting.

Saving money for those repairs in addition to hiring painters — and having the work itself done — would push Gibson close to the city’s fall deadline, she said. And she wasn’t even sure the city’s voucher would provide enough paint to cover her roughly 2,000-square-foot home. That made the required training and multiple inspections — four total — seem less worthwhile. Gibson gave up.

Instead, she is considering saving up for vinyl siding.

Though the 2021 application says residents could get up to $600 for paint and supplies, the legislation calls for up to $1,500 for owner-occupants and $750 for tenants. Jackson told council in March 2021 that the city lowered the amount on the application because the average voucher was for about $600. Plus, some people had used more paint because they didn’t like their first color choice or because they tried spraypainting and ended up wasting it, she said.

The painting deadline stated on the application — Oct. 31 — was top of mind for several residents.

Gibson and another resident interviewed worried they would have to pay back the voucher amount if they didn’t finish in time. Though it’s not clear in the applications, Jackson said residents can return unused supplies and paint that isn’t tinted and can request extensions to finish painting their homes.

The waiting (to paint) is the hardest part, for some

While the physical toll of painting or the cost of hiring professionals created challenges for some residents, Judy Muldoon’s problem was waiting for her vouchers to come.

Muldoon, who lives in West Park-Jefferson, gave her two-story bungalow a fresh, dark green coat — mostly by herself. That required eight-hour days and self-set deadlines.

After filling out an application, Muldoon attended the required virtual class on lead-based paint safety the first week of June. After that, she should have received a voucher for her “prep pack,” a kit of supplies for preparing homes for painting, including the removal of lead-based paint. But she didn’t get that until the end of July, which she said cost her time to paint during the summer.

“It shouldn’t take almost two months to get the voucher,” Muldoon said. “So, somewhere in there, in the mechanics of the city, it just needs to be tightened up.”

Muldoon received her first paint voucher in September and finished painting in November, she said.

Despite a rough start, Muldoon said the Bellaire Puritas Development Corporation and the Sherwin-Williams store in Brooklyn made the remaining process go smoothly. Muldoon, out of work since the pandemic, said she appreciated a program that gave her about $600 of paint.

“It started out very slow; I wasn't happy with it in the beginning,” she said. “But once I started, I was really grateful for every last bit of it.”

For other residents who experienced a delay in receiving vouchers, the timeframe to paint was even shorter.

Marileidy Fermin applied in February of last year. She received her supply voucher in June or July and prepared her West Boulevard home for painting. Fermin then began a months-long process of calling the city — as the application instructs — in order to get the paint voucher. Fermin, a supervisor at Help Me Grow, a support network for expecting and new moms, called every week or so but didn’t reach anyone until Nov. 2, two days after the program’s deadline.

Though she doesn’t remember the name of the person she spoke with that day, details of the call have stuck with her.

Initially, she was told that the program had ended. After Fermin explained how she had tried to speak to someone, the city offered a deal, she said: if Fermin could paint her home in two days, she would get the paint voucher and not have to pay back money in the amount of the vouchers she redeemed. If that didn’t work, she could wait until spring to paint.

Not wanting to pay back the money, risk the program’s end or deal with the arrival of new city personnel unfamiliar with her situation, Fermin paid three people to help paint, a job that took five to seven cold and rainy days in early November.

“That was the biggest challenge ever,” Fermin said, adding that she wasn’t aware of the deadline or penalty until the Nov. 2 call. “I had to … pay somebody to come and paint as soon as we can.”

Ultimately, things worked out, she said, with the program saving her money on a new coat of sky blue paint for her home.

Labor is a key challenge

Council Member Anthony Hairston, whose Ward 10 had the highest number of program applicants — 138 — said that while the program has helped many residents beautify their homes, securing the labor remains a challenge.

“I think that there are some legitimate needs that exist that we should look at,” Hairston said.

House painting in Cleveland can be difficult, especially for people without experience, said Kris Harsh, the newly elected council member for Ward 13 and former Housing Director at Metro West CDC. Harsh spent several years working with a crew painting houses and said it’s not hard to spot a Cleveland home with a new coat of paint that stops at the eaves. That’s because most people can only get 40-foot ladders.

“Getting a 60-foot ladder isn’t easy,” he said, noting that they are difficult to set up and maneuver, especially on windy days.

Harsh wonders if it would be beneficial to slow down the program and, instead of enrolling new residents each year, build relationships to help overcome challenges to completing the work.

“Programs like this — you have to get a whole lot of things lined up to get it to work perfectly,” he said.

Lynn Rodemann, housing outreach specialist at Slavic Village Development, said that the cost of labor was a barrier for residents, and that the lack of broadband access prevented some from taking the required lead-safe training. In some cases, her CDC used money from one of its programs to help seniors and residents with disabilities to pay for painting. “But our funds are limited,” she said

Quotes for painters ranged widely, from $3,000 up to $8,000, residents told Cleveland Documenters. Some also were concerned that contractors would not safely discard lead-based paint. Jackson told the City Council last March that the city had learned of at least five contractors who did not follow proper rules for scraping or paint-chip disposal.

Council President Blaine Griffin said the clock is ticking on the program. He doesn’t want to scrap it because programs often need three to five years to become functional, and the pandemic and staffing turnover and shortages likely hampered success. Griffin, however, said he would be hesitant about the city paying for labor without an honest assessment of costs and with concern about residents being able to choose their own contractors. Still, he is open to ideas for improvement.

“We will definitely listen to the public to figure out how we can do better,” Griffin said.

Fermin and other residents would like to see a program that offers free or low-cost labor based on income for applicants who need assistance with painting.

This story was reported by Cleveland Documenters in partnership with The Cleveland Observer. Reporter Rachel Dissell contributed to this story.
Scroll to read more Cleveland News articles
Join the Cleveland Scene Press Club