The Cuyahoga River Has Caught Fire for 14th Time 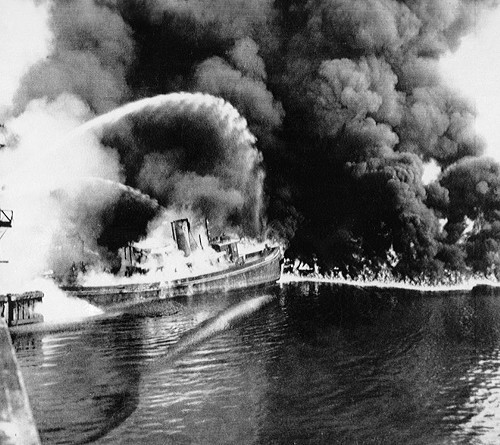 Photos from the 1952 Cuyahoga River fire, like this one, were often erroneously used to illustrate stories of the 1969 blaze.

The Cuyahoga River has caught fire for the 14th time in its storied incendiary history and for the first time since the infamous Cleveland blaze on June 22, 1969.

A fuel tanker, reportedly from Holland Oil and Gas, crashed on Rt. 8 near Cuyahoga Falls about 8 a.m. Tuesday. The ensuing fire "leaked into the river via storm drains," according to the Cuyahoga Falls Kayak Race Facebook account, which posted drone footage of the blaze from Fox 8.

Fox 8 reported that Rt. 8 is now closed in both directions and that Akron police are on scene. Akron's nearby North High School — which evidently is in session — is being evacuated.

Last year, Cleveland celebrated the 50th anniversary of the 1969 fire and the environmental awareness and regulations it catalyzed. The so-called "Cuyahoga 50" celebrations featured a week of events and exhibits to stress the importance of clean water in Cleveland and around the world.

The river's health has drastically improved since the heydey of industrial pollution in the 1950s and 60s. Just this week, Scene interviewed a dedicated local "trash fisherman" who kayaks the Cuyahoga in Cleveland every day to remove litter.