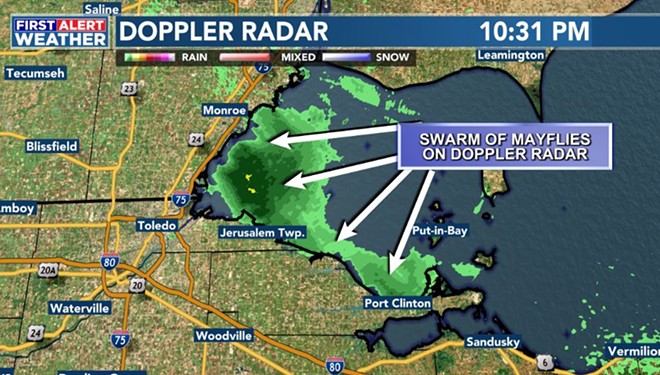 We've reached that magical middle phase between when mayflies are just eggs and larvae at the bottom of Lake Erie bothering no one and the day they arrive to cover every inch of your house and car.

Have you seen any Mayflies yet this year?
I have...on Doppler Radar. What a swarm! pic.twitter.com/Cf3Bm1yvyH

Yes, when millions of mayflies emerge they get picked up on Doppler, and soon they'll cake everything like an Old Testament plague.

If you have blissfully forgotten what it's like, here's a reminder.


Adult mayflies — otherwise called Junebugs and Canadian Soldiers — are only alive for about a day, and in that time they generally do nothing but reproduce. Eggs can sit at the bottom of Lake Erie and elsewhere for two years until they annoyingly mature.

Learn more about the pesky enemy of the north shore below.