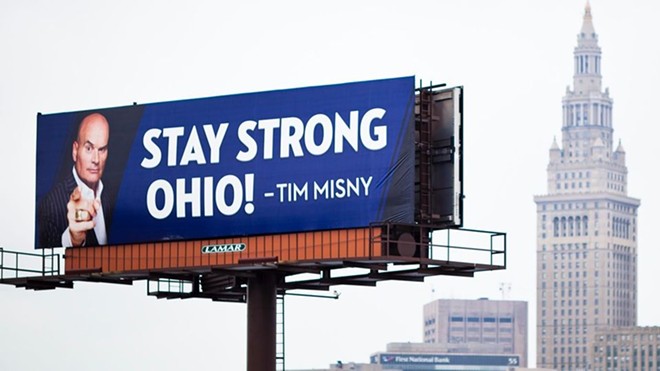 Tim Misny has for the last two years engaged in what has to be some sort of record for billboard advertising. They're impossible to miss, bearing either his trademark "Misny Makes Them Pay" slogan or the "Stay Strong, Ohio!" pandemic messaging.

But has Northeast Ohio's baldest, most ubiquitous personal injury lawyer and minor pop culture phenomenon gotten his money's worth?

The Toledo Blade asked him.

His answer: The campaign has been, “Phe-no-me-nal. Phenomenal.”

While he didn't spill on exact numbers, he did tell the Blade the incoming client calls have broken records and the billboards, even for a guy who was already well known and plastered all over TV commercials, have been a "steroid shot" for his practice. They've even inspired a subreddit dedicated to capturing novel graffiti treatments and Photoshops.

Misny's come a long way since the early 1990s, when he was indistinguishable from any other personal injury lawyer promising to do right by accident victims.


And a clubby tune last year.


“I think people appreciate that there’s a guy out there who levels the playing field for them, because if there weren’t lawyers like me out there to hold medical institutions and businesses accountable, people would have no chance of justice,” Misny told the Blade.

- Politico's Michael Kruse dropped a lengthy profile this week of Max Miller, the Trump acolyte running against Rep. Anthony Gonzalez in the Republican primary in the OH-16.

There's plenty in there on the Trump test-case dynamics at play in the race but also plenty on Miller's allegedly abusive past.

“An incredible patriot,” Trump said, “who I know very well.”

Maybe not well enough, according to police records, court records and interviews with more than 60 people. Ranging from people who grew up with Miller in the affluent Cleveland inner suburb of Shaker Heights to those he worked with and for in the White House and on Trump’s campaigns—some of whom were granted anonymity because they fear retaliation from Miller, Trump or both—these people told me Miller can be a cocky bully with a quick-trigger temper. He has a record of speeding, underage drinking and disorderly conduct—documented charges from multiple jurisdictions that include a previously unreported charge in 2011 for driving under the influence that he subsequently pleaded down to a more minor offense.

And barely more than a year ago, according to three people familiar with the incident, Miller’s romantic relationship with former White House press secretary Stephanie Grisham ended when he pushed her against a wall and slapped her in the face in his Washington apartment after she accused him of cheating on her.

Here's a montage of fake applause being pumped through the speakers at a @ShontelMBrown event.

This is most trivial, obvious, and hilarious bullshit I can call out right quick, but this whole speech is as fake as the claps. pic.twitter.com/SC7RYhVxXh

- The U.S. Nuclear Regulatory Commission is focusing its attention on the Davis-Besse nuclear power plant with a special inspection planned after two recent incidents, including diesel generators that have failed multiple times this year and a "complicated reactor trip" on July 8.

28 - Total Ohioans arrested for their roles in the Capitol siege and riot. Two more were arrested and charged this week.

$100,000 - Amount Ken Johnson, on trial now in Akron on public corruption charges, owes the IRS in back taxes because of inflated deductions, according to an IRS agent who testified this week.

2- Ohio's rank nationally for states with the most lead lines still in existence. An estimate five years ago put the number at 650,000. The Congressional infrastructure bill would provide states with money to replace the lines.

$20 million - Total donated this week by the Mandel and Myers Foundations to DigitalC to help close Cleveland's digital divide.


- Vintage photo of the week:

Cleveland's Stella Walsh, trains with her sister Clara Walsh in May 1932. Later in the year Stella would win #Olympic gold in the 100 meter dash as a representative of her native Poland. Source: @Cleveland_PL #Olympics pic.twitter.com/lDfPyuHZ98