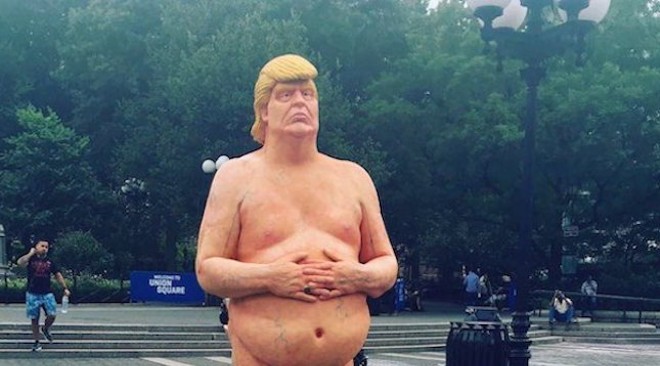 Courtesy of The Hill
Update: The artist behind "The Emperor Has No Balls" claimed his naked Donald Trump statue from Cleveland Heights City Hall at 11 a.m. this morning. Cleveland Heights police had earlier whisked it away almost as soon as it was installed in Coventry back in August. The artist, who goes by the name "Ginger" and is from Garfield Heights, will auction off the statue with proceeds benefitting public arts projects in Coventry Village and throughout Cleveland Heights. More info on that when it's available.

Big Fun in Coventry managed to get a BSFW (barely safe for work) snapshot of the statue before it was hauled away:

Residents say the statue was originally located near the corner of Euclid Heights Blvd. and Coventry, but was removed by the city of Cleveland Heights.

We're not sure if the piece will appear anywhere else next, but check out this video of the statues (there are five in all) being made:

As we learned, the project, The Emperor Has No Ballls, was part of a five-city, guerilla art installation by INDECLINE. With the RNC already long gone, it’s placement in Cleveland – more accurately, Cleveland Hts. – seemed odd in a list including Los Angeles, San Francisco, New York City and Seattle. So why Cleveland? It turns out the artist responsible for these statues is originally from Cleveland.

“INDECLINE set out to source a sculptor who would be tasked with creating 5 life-size statues of Donald Trump,” organizers explained through a press release yesterday. “These statues would then be transported to five major US cities to be installed in broad daylight in high traffic areas using an industrial strength epoxy. The installation would commence and be fully documented on the same day, at the same time, in each of the 5 cities.”

“Ginger” is a Cleveland-born artist, currently living in Las Vegas. Previous to his commission from INDECLINE, he served as the director of Eli Roth’s Goretorium, a haunted house in Vegas. His work has also been featured on various television shows and films. His ability to capture the grotesque and monstrous is what initially drew INDECLINE to the artist.

Apparently, there's a fully naked statue of Donald Trump popping up in cities across America...including Cleveland.


Indecline, the anarchist collective group responsible for the project, also set up the life-size statues in NYC, Seattle, Los Angeles and San Francisco. The group says the statue is part of their "The Emperor Has No Balls" project, which is inspired by the Hans Christian Andersen children's tale "The Emperor Has No Clothes".

Each statue weighs about 300 lbs. and the project took four months to complete.

We're not yet sure where the Cleveland statue is located, but if you've seen him give us a holler.