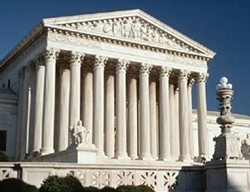 WIKIMEDIA
It's been a long time coming, but the U.S. Supreme Court is prepared now to hear oral arguments in Ohio's "voter purge" case, which has taken a national spotlight as we carry on with conversations about how elections function in this country.

The gist, as we've written: "Secretary of State Jon Husted's office had actively scrubbed tens of thousands of registered Ohio voters from the rolls. The rationale was convoluted, insisting for the most part that those voters had either failed to show up at the polls in recent years or failed to confirm their home addresses. Some were legit: People die and people move out of Ohio, and their names should indeed be dropped from the database. The total extent of the purge has remained unclear; state officials point out that this has been business-as-usual for years."

The legality of that process — the "purge" of registered voters who haven't voted in the past two years in Ohio — is in the hands of the U.S. Supreme Court now, which will decide whether Husted's office acted within the bounds of the constitution. That argument has bounced back and forth between court decisions in the past several years. This federal decision is expected to rest the case.

Husted has adamantly defended the process: "This case is about maintaining the integrity of our elections, something that will be harder to do if elections officials are not able to properly maintain the voter rolls," he said in a recent public statement.

The other side of the argument, helmed in part by the ACLU, looks to language in the National Voter Registration Act: "Voting in the United States is not a 'use it or lose it' right. Ohio’s practice violates the National Voter Registration Act — sometimes called the Motor Voter law — which expressly prohibits removing voters solely because they did not vote in an election or return a piece of mail."