The city's Squeaky Clean Patrol dips into its bucket of paint -- and wipes out a legendary urban art gallery. 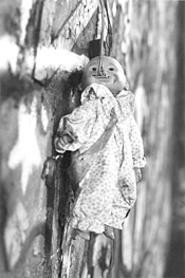 The Eagle Avenue Bridge, in its dolled-up glory.
It was August of 1991, and either the stars over Tremont were arranged in an especially loopy connect-the-dots that month, or everybody's shrink was off clamdigging in Cape Cod. Whatever the reason, the artists were losing it.

These ordinarily zenlike types were brawling in barrooms, while others -- typically rock-solid -- were suffering existential breakdowns. They needed to chill out. And so one Sunday night they relaxed, not by throwing a block party with ambrosia and tuna casserole, but by hauling glue guns and tubs of paint out to dress up a forgotten corner of the industrial underbelly.

There, under the Eagle Avenue Bridge, about 40 of them stenciled images of skeletons and strung up a mobile fashioned from electric guitars. They brightened up the concrete supports with a glittering mosaic made of holy cards, bits of colored glass, and bubblegum charms. They set fire to things. And they fell in love with this dank, vaguely apocalyptic place, deciding that the bridge was such a cool canvas that the ensuing artistic collaboration there ended up lasting 11 years.

They called it the Temple of Lost Love, and its mere existence inspired wild rumors of human sacrifice, devil worship, and, more recently, a scurrilous band of junior-high dropouts with nothing but time.

But a few weeks ago, the temple was abruptly, if accidentally, destroyed when city workers took it to be the handiwork of sullen teens with a spray can. Which it sort of was, at least to the casual observer. The fact that a bunch of skinheads had written "Fuck the Police" there in an assortment of patriotic colors probably didn't help matters. "[The cleanup crew] saw it as being graffiti and painted over it," city spokesman John Grossmeyer says. "They apologize if they offended anybody."

Far from the first time somebody confused art with trash, it was an honest if ill-timed mistake. Mayor Jane Campbell had recently announced in a press conference that she wanted to make the city more artist-friendly. Beautifying the bridge pillars with a soothing coat of dove-gray primer probably wasn't what she had in mind.

The temple's devoted flock was shocked at the sight of the scrubbed concrete. "When I saw it was painted over, tears welled up in my eyes," says acolyte P.J. Doran, a freckled 36-year-old who rarely goes anywhere without a camcorder and a movie camera. "I was really bummed, really distressed. Everyone wanted to come down and paint it again."

After all these years, such sentiment is understandable. But it misses some of the original spirit behind the temple, which was touchy-feely, yes, but also audacious and fun. The public canvas was initially chosen because it was subversive -- no one makes art in a clandestine industrial site, where moonlight glimmers off the crushed malt liquor cans -- and because it was inherently temporary.

Temple founder Frank Green, an artist, writer, and mischief-maker who's now suffering from AIDS-related dementia, says he had only a one-night "happening" in mind back in 1991, when he first got everybody together. "I told people they could do whatever they wanted," he recalls.

They took him up on the offer. Some ignited their artwork right across the river from the fire station. That not only got the fire department's attention, but also stirred up Channel 5 reporters, who broadcast false rumors of satanic rituals. Green ended up on the late-afternoon talk show Live on Five the next day, explaining the difference between art and devil worship to Wilma Smith.

In the years that followed, anybody with a bottlecap collection and half a tube of caulk could contribute to the fledgling fresco. Cryptic philosophers left fortune cookies like "Love Is a Cheese and Pepperoni Pizza" scrawled on the pillars. Insomniacs headed to the temple at 3 a.m., struck by the urge to spray-paint a picture of a buck-toothed guy with googly eyes and a really long neck.

Then, on September 11 of this year, a sculptor named Beth Wolfe organized an "11 year and one month" reunion for anybody who'd ever hung out at the temple. One of the true believers, she already visited the site every year.

About 50 other artists showed up with their paintings and sculptures. Doran was there with his trusty camcorder, capturing the moment when the cops broke up their party because they didn't have a permit. Wolfe herself planted a hardy little garden of boxwood and yew that would eventually poke up through the soot and chemical residue. It lasted, until the city chopped it down during the cleanup effort. She's cautiously optimistic, however, that it will grow back. And maybe the temple will, too, she says. The city wants to make nice with the artists -- maybe they'll even get the OK to reclaim the bridge.

If not, they'll have to be squatters again and stake out another magnificently run-down place where everybody can show their artwork. Hope grows in the unlikeliest of places, and Cleveland definitely still has a few of those.