What to Expect From Signal Cleveland, the City's New Community-Focused Newsroom That Officially Launched Today 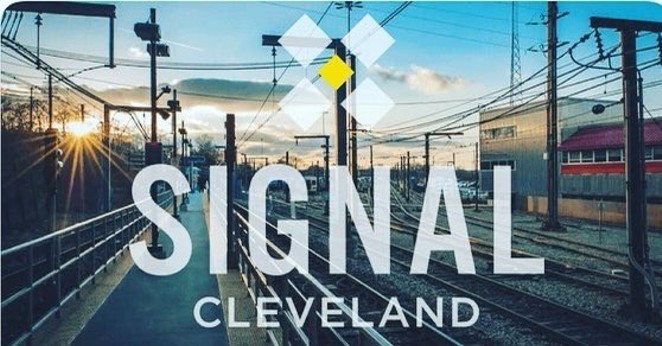 Signal Cleveland, the new nonprofit media outlet created with some $7.5 million in seed funding from the American Journalism Project, the Cleveland Foundation, and other local and national organizations, officially launched today with its first stories and the debut of its website.

Imagined as a "local news organization that fuses community building with local news reporting," Signal will feature explainers, civic tools and resources, the work of the Cleveland Documenters, and stories by the newsroom's handful of beat reporters who will be covering government, health, education, criminal justice and the economy.

Today, from the latter group, that included a piece on the recent history of the county jail saga with a look at how Executive-elect Chris Ronayne is thinking about the issue, a story on the Guardians for Fair Work's push to get wage theft legislation passed, and an article on the St. Vincent Charity Medical Center's cafeteria's service to the Central neighborhood.

Launched one year and one week after the project was first announced, Signal Cleveland counts a staff of 15 and is led by Editor-in-Chief Lila Mills.

The former associate director of Neighborhood Connections was integral in the creation and expansion of the Documenters, the group of community members who are trained and paid to cover public meetings across the area. The Documenters have been moved under the umbrella of Signal Cleveland and their work is prominently displayed on its new site.

And today, after months of planning and millions of dollars raised, the project, which is the first in a series of planned newsrooms across the state, is live.

“Signal Cleveland has a bold mission to revitalize the local news environment in Greater Cleveland to provide all residents reliable, relevant and responsive journalism they seek, ” Tom Katzenmeyer, Signal Cleveland’s board chair, said in a statement.

What's that going to look like, at least at the outset?  We talked with Lila Mills about that and more.

(This interview has been lightly edited for length and clarity.)

What have the biggest hurdles been in building this thing from scratch?

Lila Mills: It's been about six months since I started in May, and I will say — and I always feel when I say this that I shouldn't say it out loud — but I feel like it's been fairly smooth. I think like anybody we would want to have more time to do this but I think within the six-month process we've gone through it's been fairly smooth. I'm very proud of the hiring and the process we designed to do that, and I'm just feeling really fortunate with everyone who's joined. They've brought that passion and drive to do this.

In terms of coverage, both in frequency and length, what should readers expect?

LM: I've been saying this a lot: We're just trying this thing out, and we're fortunate that we have all this philanthropic support to build it out. What you're going to see is our first attempt at doing this, and we think it's really strong. It's the first time that we can feature the Documenters' work in a really prominent way, and layering in the reporting. One of the things, you asked about hurdles... We've hired as we've been doing other things. One of our editors just started last Monday, and I just made a job offer last Friday, and the training is already moving, and the tracks aren't all in place yet. So that's one of the most challenging things.

When we turn this on, this is our first attempt. We anticipate as we do it month after month we're going to know faster, 'Oh, that's an explainer,' or, 'That's a video explainer.' Abbey Marshall, who is our service journalist, and Jeff Haynes, our multimedia director, started brainstorming this ward video series, and it's something we can do and people are ready to do and we can do fairly quickly. The more we do it, the more settled in people get... Part of this, I hope, is that people give us some grace. People are joining and a week later we're launching. So really that idea of laying the tracks and we're still pulling people up on the train.

How often are you aiming to publish stories by the beat writers?

LM: We want to publish daily, that's the goal. We want to establish influence. We looked at where we wanted to be a year from now, and we talked about how to build back from there. And we want people to be thinking, 'Let me check out Signal, I can probably get that from Signal,' for a variety of pieces of information. The way we get there is to be relevant in a daily form. At the same time we're balancing the fact that we have X number of reporters and X number of staff. But we think in order to establish influence we have to be relevant in a daily way.

Probably the biggest surprise, which shouldn't have been, is how many people in the community read about this and said if you have this investment and think you're going to sit back and produce think pieces, you're wrong. We have to meet that demand.

The Documenters are a big part of Signal, you've said that, and the website makes that clear. Their work has been celebrated in the philanthropic world, and it's been incredibly useful to other reporters in town, but one of the critiques is that by compiling everything without context or telling residents why what happened matters, it's not really helpful as a news delivery service.

LM: Well, yes and no. What you would hear me or Lawrence Daniel Caswell or Rachel Dissell say is it's really about the tool itself, it's a civic tool. It's important to know not just in the newsroom but in the context of a community newsroom. The goal is to get average people close to government. The number one question we get in training is: Do I need a media pass to go to public meetings? The answer is anyone can go. It's about building the comfort level, for a variety of different people to do this work. That's what we talk about when we talk about democratizing journalism. Take the public records course. It's about saying you don't need to be a reporter to put in a records request. We've heard, since the beginning, they want their work to have more of an impact, to have more eyes. And bringing the Documenters into the Signal newsroom also means there's a connection between the work they're producing and the reporters. Prior to this, if we saw something, it would mostly be us reaching out to reporters around town saying, 'This is interesting.' So now we think we have a more clear and direct connection. It's important to make that differentiation though. The Documenters do their thing, and that should not change. We value their work and we hope that coming here they can see their work amplified.

What's success look like in six months and a year?

LM: We have April Urban (Director, Research + Impact) on staff and she's just beginning a dual role building an external dashboard and internal metrics. We're going to start with internal metrics so we can measure our success. I think broadly success looks like us knowing what our niche is and better defining it. It looks like more people knowing who we are and growing our connections. It looks like settling into our office space so we can invite people to meet us. And just being able to do the work.