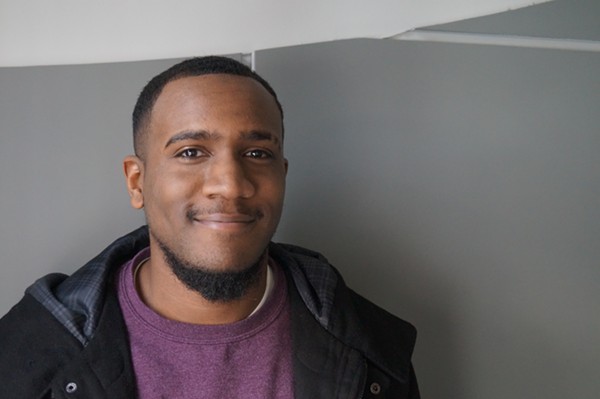 Sam Allard / Scene
Garrison, at Scene HQ, in January, 2017.
Twenty-seven-year-old Cleveland mayoral candidate Ja'Ovvoni Garrison has stepped out of the race, announcing the decision in a Facebook post yesterday.

"I sincerely have had a great experience and I appreciate those who've supported [me] throughout the past months," Garrison wrote. "Overall, me stepping out of the race I believe is a mature choice as far as long term strategy in making Cleveland better. I look forward to the other candidates on the Mayoral and Council level to push for legitimate policies and ideas in city hall that will alleviate our current issues across public education, poverty, health, housing, transportation, and limited opportunities."

In a conversation with Scene Thursday, Garrison said he's happy with his short-lived candidacy.

"I didn't go in with high expectations," he said. "The goal was to put my feet in the water, and I feel like I've really expanded my network in terms of meeting more people outside my radar and  gaining better insights."

Garrison said he's been attending the meetings of the Community Police Commission, for instance, and getting feedback from commission members and residents about issues across the city.

"From the outside looking in, it makes sense for me to stay grassroots," he said, "hopefully, I can build more initiatives and see what happens come 2021. It'll be much easier moving forward."

Garrison said he's not officially supporting another candidate at this point, but is interested in both Jeff Johnson and Brandon Chrostowski. He thinks they both have the "fire" to make change.

"Jeff may be the best-case scenario," Garrison said.

Garrison has a background in community development, skateboarding and graphic design. His candidacy was marked by bold, outside-the-box ideas, including a temporary income tax levy to subsidize the imperiled regional transit system.

And while some of his ideas were inventive and some of his diagnoses sharp, he was unable to build a network of support, including financial support, primarily through social media. In one of his more radical statements, he told Scene that if he couldn't raise $10 million, he didn't deserve to be mayor. A banner atop his website has read "$9,999,830 to go" since Scene's first visit to the website, in January.

Garrison, who was animated chiefly by the idea of disrupting the status quo, was a breath of fresh air in these early campaign months. The mayoral race's chief contenders — Incumbent Mayor Frank Jackson, Councilman Jeff Johnson, perhaps councilman Zack Reed, who has yet to officially announce his candidacy — probably won't regard it as anything more than a blip on the radar.

Like Brandon Chrostowski, another left-field candidate with no experience, Garrison argued that running for a council seat would have been worthless. Both candidates have said that it's impossible to get anything done as a city councilperson, and the only way to effect change is to lead the city of Cleveland from the top.

Garrison is still a young man, and he may yet run again. He hinted as much on social media. "Til 2021," he wrote.


—
*This story has been updated with comments from Ja'Ovvoni Garrison.