For Russo Brothers, Cleveland Cinematheque is Most Important Theater in the World 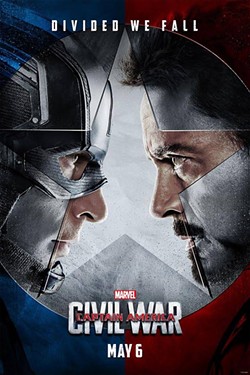 Captain America: Civil War opens Friday and is predicted to be among the biggest box-office smash hits of 2016. (We saw the film Monday, and rest assured that it’s every bit as gritty and grand as Winter Soldier.)

Hometown boys Anthony and Joe Russo directed the film. It’s their second of four directorial entries in the Marvel Cinematic Universe. They also helmed Winter Soldier and have been handed the reins to Infinity War: Parts I and II by Marvel producers who love their style.

The Russos were in Cleveland Monday night for a special screening at the new Milton and Tamar Maltz Performing Arts Center at Temple-Tifereth Israel. The screening was a fundraiser for Phase two of that project’s construction.

“It’s a beautiful facility,” said Anthony Russo, in an interview with Scene. “It’s magnificent, and such an original concept. [Performing arts center / synagogue]. To be able to play a small part in its success is such a thrill for my brother and I.”

The Russos often return to Cleveland and were instrumental in the decision to film much of Winter Soldier here. There’s even a nod to Cleveland in Civil War. An early scene takes place in the basement of a former soviet spy, and “Cleveland” flashes across the screen.

Anthony was rhapsodic in his praise for his hometown, and, in particular, for the Cleveland Institute of Art Cinematheque. He identified himself as a "Cinematheque kid" in a New York Magazine feature story last month, and confirmed for Scene that he and his brother Joe “devoured” foreign and arthouse movies there when they were teenagers.

“Of any movie theater in the world,” Russo said, “the Cinematheque is the most important movie theater to my brother and I, in terms of our film education and our passion.”

Russo called thew new Cinematheque space magnificent, but said he has fond memories of sitting in the uncomfortable wooden seats at the old theater.

"They're now redoing that auditorium," Russo said, "and they offered me a bunch of the seats, so I'm taking them."

The alternative film theater was founded in 1986. It shows art, independent, and foreign films and hosts special series and panels on classic films and significant/innovative/weird filmmakers. The full May schedule is available here.