Twice Is Nice: Deer Tick Returns with an Instant-Classic Double Album and a Two-Set Tour 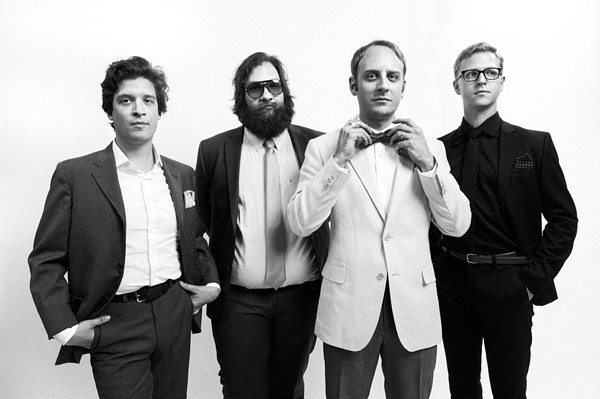 John McCauley has the flu. Actually, all the guys in Deer Tick have the flu. When I call McCauley at his home in Nashville, he’s recuperating with a cup of Italian ice. “Strawberry,” he says. “Luigi’s.”

Deer Tick just wrapped its European tour, wherein the band treated invigorated audiences to its new two-set format—acoustic and electric, in keeping with the new double album release, Deer Tick Vol. 1 and 2. No opener. McCauley says it was a great ride and a thrill to feel the rhythms of the road once again. (On the last night or so, the tour ended with an abrupt band-wide bout of influenza.) Until recently, Deer Tick has toured only sporadically amid a three-year hiatus of sorts. They’re eyeing a U.S. tour now; the band plays Beachland Ballroom on Feb. 27.

Until then, it’s rest period at the homestead for McCauley and Co.

“I’ve just been watching nature documentaries on my couch on the BBC channel,” he says.

From the foundational years in the mid-2000s as a songwriting and touring vehicle for McCauley, Deer Tick grew quickly into something of a road warrior band and a natural descendent of things like grunge rock, early-70s Neil Young and the solitude of one Hank Chinaski. Together, these days, they're a force onstage. Rounded out by guitarist Ian O'Neil, bass player Christ Ryan and drummer Dennis Ryan, Deer Tick is something with which one contends.

For years, the term “indie folk” followed Deer Tick like a hapless hound. The thing is, Deer Tick has far more in common with rock 'n' roll outfits like The Replacements—the two bands practically share DNA. But in Deer Tick’s case, their acoustic songwriting in the studio bore little resemblance to the raucous, garage-inspired country punk power-pop that fans saw out on the road. This was a case of split personalities, which is to say Deer Tick is probably a lot like you and me.

In 2017, the band settled the score. McCauley led them out of their winter and released a double album that massaged their acoustic needs (Vol. 1) and their electric needs (Vol. 2). After a decade-long balancing act, followed by a few years’ worth of seclusion, the guys in Deer Tick decided to let it all hang out at Ardent Studios in Memphis, Tennessee (which is where The Replacements recorded Pleased to Meet Me).

They took the idea to the road, and they'll do so in Cleveland later this month: one acoustic set and one electric set, which they'll stretch out as long as they see fit and as long as the crowd is eating it up.

“Comparing this to any of our shows in the past—there’s really no similarity, I guess,” McCauley says. “We did that acoustic tour a couple years ago. And that was something that we wanted to continue doing somehow, but we thought if we could do it all in one night that could be really fun. It’s kind of crazy. It’s a lot of work, and it’s a long show and a lot of singing.

“If you like our band, I don’t see why you wouldn’t like this show,” McCauley says dryly. “It’s a career-spanning night of Deer Tick’s music.”

Precisely. Based on critical acclaim and road-tested experience, Deer Tick has earned a chance to reflect on the years that brought them to this moment, to this tour. They've done things.

There's stuff from every album in each set, although, of course, there's a gentle spotlight on the newer tunes.

“The new albums – the format of the new albums kind of serves as a good format for our entire catalog,” McCauley says. “We just never used to bring our acoustic guitars out on the road, because, I don’t know, we always thought they were too much of a pain in the ass to get a good sound going with them. We never used to have our own sound guy, so it was, like, who knows who’s going to do your sound every night? They used to use speaker monitors, and shit would just feed back and it just drove us crazy. So we never played acoustic guitars on the stage until pretty recently.”


Fans seem to dig it. The band's legacy rests just left of classic Americana songwriting. Based on Rhode Island and surrounded by personal strife (family troubles as young men, substance abuse problems), Deer Tick is rooted strongly in the despair and introspection that clings tightly to McCauley's spirit. When all is said and done, he won't be remembered for his cheery songs.

In most of his best songs (“Twenty Miles,” “Baltimore Blues No. 1,” “Art Isn't Real”), you can almost picture McCauley, right there, through a dusty window pane, singing his way into a new song for the benefit of his soul. He is an acoustic songwriter, surely, and this new tour is allowing him to share a bit more of that with longtime fans.

“I like doing both, but I always thought I liked playing electric stuff more,” McCauley says. “I always thought it was more fun or something, but getting to do both every night makes it harder for me to choose a favorite. I do enjoy in the acoustic sets how we have a lot of different folk instruments onstage, from a mandolin and bouzouki and pennywhistle and all kinds of stuff that we know how to play but maybe never really used on our records before. It’s kind of fun to show off our musicianship a little bit in the first set.”

And it's all there in the dazzling Vol. 1. Each of these new albums feels like a cohesive set of tunes, and still they work in harmony as two parts of a whole. “Doomed from the Start” carries McCauley's classic cloudy weather, ramshackle rhythms and all. It feels like an acoustic Deer Tick song, and it feels natural in that Vol. 1 silo.

“Most of them were pretty obvious to me,” McCauley says. “I came up with idea pretty early on when we just had a couple songs, and I thought, 'Oh, we could go in two different directions with this. We could make two albums.' There were a couple songs where we tried recording them in—you know, we tried doing an acoustic version, and maybe it didn’t work. So, we did an electric version—or the other way around. Most of the songs were pretty obvious in that aspect.”

And it certainly feels right, listening from one album to the next (or jumping around from song to song).

“I’m just happy to be back on the road and doing it more frequently than we have in the past few years,” McCauley says. “We’re going back to a few places that have always been good to us and a lot of places that maybe we’ve neglected to show enough love for over the years. Cleveland is maybe one of those places that we haven’t played too often.

“It feels good, being able to get around again and to use our music as a vehicle.”