Which isn't to say it's not worth the price of admission 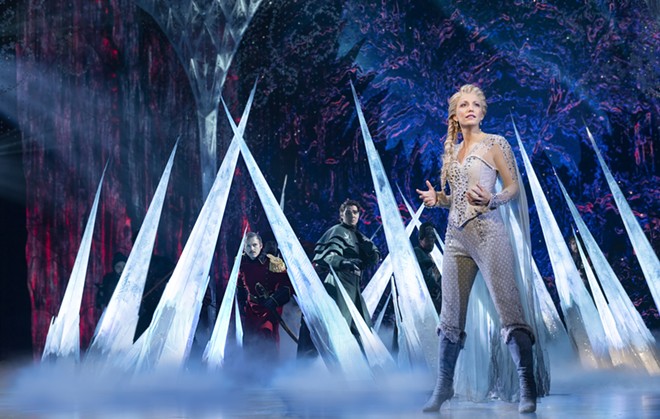 The Disney entertainment empire has been working hard over the years to present films and plays that are both racially diverse and female empowering. Their hits such as Aladdin, Moana, and Tangled have touched on those issues—in addition to just telling great stories.

One would expect nothing less from the stage version of the billion-dollar property that is Frozen, which is now visiting the KeyBank State Theater at Playhouse Square. This monumental touring production is highlighted by one number, the Act One closer "Let It Go," which is set in a glistening ice palace and is dazzling, stupefying and magical. It's tempting to say that song alone is worth the price of admission, but that's a tough call since the rest of the show stumbles as often as it soars.

If you aren't a child or don't have one, you may not be acquainted with Frozen, a fairytale set in the snowy environs of Arendelle, a fictional kingdom strongly resembling Norway,where the king (Kyle Lamar Mitchell) and queen (Belinda Allyn) are raising two daughters Elsa and her younger sister Anna. It turns out Elsa has a super-power, the not altogether useful ability to freeze damn near everything, including other people. That can be fun as the girls put together a snowman named Olaf in their bedroom. But then Elsa loses control and almost turns her sister into a princess-sicle, motivating mom and dad to separate the girls for Anna's safety.

As the play unfolds, hewing close to the film version, the principal creators—Kristen Anderson-Lopez and Robert Lopez (music and lyrics), Jennifer Lee (book) and Michael Grandage (director)—labor to find the right balance between the sad isolation of the sisters while having fun with supporting characters and almost two dozen songs.

After the girls grow up, the King and Queen sail off to find a cure for Elsa's fickle finger of frigidity, but they die in a storm. Elsa is crowned Queen and she is reunited with Anna at the coronation. While at the bash, Anna meets hot Prince Hans (Ryan McCartan) from a nearby country and they decide to get married. As the newly minted Queen, Elsa objects because, well, Anna and Hans have only been dating for a few hours. Once again. Elsa goes all polar vortex then escapes for the hinterlands, leaving Anna alone again. Meanwhile, Arendelle is doomed to eternal winter—sort of like February in Cleveland, but forever.

At this point, the storytelling in Frozen becomes confusing since the core story is frequently interrupted by songs and scenes that jerk the proceedings to a halt. These include a poorly supported subplot involving Hans and the introduction of a supposed villain, the height-challenged and misogynistic Duke of Weselton It is mispronounced repeatedly by others as Weaseltown, in the faint hope that repetition will make it funny. Jeremy Morse does his best with that clumsily written part.

As Anna searches for her sister, she stumbles upon Kristoff (given an energetic turn by understudy Zach Trimmer) and love blooms. They are soon joined by the incongruous reappearance Olaf the snowman, who shows up to sing about his love of summer. It's cute as death-wish songs go, but it does nothing to advance the story.

After intermission, the audience is presented with perhaps the worst Act Two opener in memory. Instead of returning us to the story of the sisters, we are presented with "Hygge," an ode to the Norwegian word for comfortable or cozy. A happy dude named Oaken (a blameless Michael Milkanin) sings about the joys of a sauna as a stream of "naked" people rush in and out of the sauna covering themselves with branches. Anna, Kristoff and Olaf look as befuddled as the audience feels as they stand aside, waiting for their story to start again.

There are certainly flashes of inspiration in Frozen. The scenic and costume designs by Christopher Oram are sumptuous, and cleverly-engineered Olaf is manipulated and voiced with elan by F. Michael Haynie. Most important, all the sisters, both young and grown, are played and sung with sleek professionalism. Caroline Bowman as older Elsa knocks the aforementioned "Let It Go" out of the park, as her Elsa embraces her power. Lauren Nicole Chapman's older Anna is consistently amusing, employing her feisty spirit to both charm others and overcome challenges. Their duet, "I Can't Lose You," is quite sublime.

There are also some gasp-inducing special effects moments, such as when a group of folks are flash frozen and then thawed near the conclusion. But by that time, most will have given up on tracking the story and just relaxed into the huge Broadway hygge-ness of it all.

A small but tender bonus: The audience is populated by lots of little girls in their ice-blue gowns and tiaras. In their eyes Elsa, Anna, Olaf and company can do no wrong. And if that's not enough to melt your heart, then freeze you!