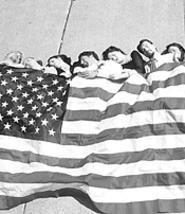 Even in tragedy, there's humor to be found -- the trick is in knowing when to unleash it. According to Habitat for Insanity, Cleveland's newest comedy troupe, now's a good time to take on terrorism.

In "Panic Phone," a pipe-bomb recipient seeks help from the pipe-bomb-defusing hotline. "It's a comment on help lines," says director Rick Ferguson. "You press 20 or 30 different buttons before you can talk to a live human being, while the bomb is ticking away."

If it makes you laugh, good. If it makes you think, all the better. That's why Ferguson included the piece in Habitat's new sketch show, Homeland Security Blanket or Charlton, Forget Your Gun.

The irreverence drifts in and out of the two-hour string of improvised and scripted skits, some of which poke fun at America's self-absorbed image. One that does is "Behind Closed Circuits," in which the CIA shapes its intelligence policies by watching CNN. "The U.S. is like the big bully who has created its own enemies," says Ferguson, a Canadian who was hired seven years ago as a producer at Cleveland TV stations WOIO and WUAB. "This country doesn't have a clue as to what's going on beyond its borders."

The second half of the show features the art of "Harold," a nonsensically named comic routine in which an audience member shouts out a word and the performers take it from there. Thirty minutes later, after the word has driven the 15-member cast to lay out swatches of unrelated ideas, the performers stitch together a coherent story. "The audience may yell out 'camper,'" Ferguson says, "but the cast ends up talking about global warming."

Ferguson plans to videotape the current run of shows for possible late-night airings on WUAB. "It's edgy," he says. "It'll make you laugh, have a good time, and think.

"We're presenting something much different than what's on the evening news." And, hopefully, more entertaining.