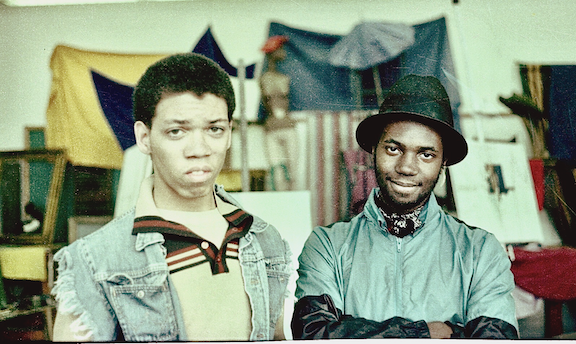 Robert Banks, the Cleveland experimental filmmaker, cinematographer and teacher, is collaborating with long-time friend Dexter Davis, a Cleveland artist and CIA alum, on a retrospective exploration of Davis and his work, including a film installation loop created by Banks.

'Robert Banks & Dexter Davis: Color Me Bone Face,' which also enlisted the help of high school students from the NewBridge Cleveland Center for Arts and Technology, CIA and CSU, opens this Friday, March 18, from 6 to 9 p.m. at moCA Cleveland and runs through June 5.

This film installation loop sponsored by moCa is a preview in anticipation of seven short films by Banks based on Davis that are scheduled to premiere June 2 at The Cleveland Institute of Art Cinematheque.

The film installation loop’s title, 'Color Me Bone Face,' combines the title of a painting called “Bone Face” by Davis and film shoot Banks did of Davis years ago.

The two artists have gone largely underexposed over the past 30-plus years.

Banks is working with his students and Davis to reintroduce the two and their aesthetic prowess in this exhibition, which will display some of Davis’ challenging multimedia works alongside highlights of his Davis' work through a variety of medium, including film, photos and sound bites.

“There’s a hint of irony,” said Banks. "He has Vitiligo and his melanin is almost gone. He has this thing about skulls and corpses and cadavers but also the emotional effect you get from that. The original idea was 'Color Me' because we did a photo shoot back in the 1980s called 'Color Me Black' and I like that title, but I thought that would be way too heavy handed. So I said let’s just take both titles, let’s just do 'Color Me Bone Face.'”

Banks and Davis met as freshmen art students at CIA and became fast friends, realizing that they were both unique in their art practices, their love of comics and monster movies, and both being from modest means. Each grew up in the historic Hough neighborhood, where Davis experienced one of his most vivid exposures to violence.

“When I was 10 years old a mobster threw a white body in front of my house because he knew that because of the racial tension he could get away with it,” said Davis. “And he straightened his tie, got in his Cadillac and drove away.”

Violence is something which remained a theme throughout Davis’ life. He recalls a wooden cross being burned in his front yard. He was beaten up by a gang which caused $5,000 worth of damage to his face and from which his jaw still clicks, and in 2020 he was shot in the back in an incident involving road-raged driver.

The bullet is still embedded in his lower back and Davis saved the bloodied shirt that he is using in a piece entitled “Bullet,” which will be part of his series of 15 works and a sculpture to be featured in FRONT International: Cleveland Triennial for Contemporary Art and which will be displayed in CIA’s Reinberger Gallery. Although time has passed to the point where Davis is able to comment artistically on the violence in his life, when it happened he admits that art was not on the forefront of his mind.

“When someone hurts you, you’re in trouble psychologically and physically,” Davis said. “It’s not about art, it’s about your life. Nobody can ever get used to violence.”

Both Banks and Davis seem to share the sentiment that audiences have addressed their respective work at times saying that it wasn’t “Black enough,” a message which frustrated both men, who were merely focused on the process of self-expression.

"People have gotten mad at me because my work doesn’t talk about the civil rights stuff," said Davis. "They want me to be ‘that thing’…typical, holding the Black baby up in the air, Roots and stuff like that. I’m talking about my life and my experience the way I want to. I’m Black and I have to show my 'Blackness'? It’s ridiculous.”

I asked Banks what people can expect from the exhibition.

“I’ve been doing this with my bare hands since I was a kid and I’ve explored other means of expressing myself and expressing my experience and also trying to acknowledge what’s right and what’s wrong about our society. The same thing with what Dexter does. So we want people to walk out of here and know that, yeah, we are dedicated to what we do as artists and we have no shame and we don’t tolerate any aspect of ignorance. It’s like either you get it or you don’t get it but guess what, its gonna stick with you.”

As for his process Davis simply said:  “My process is that I like to resurrect what is not there. I find something that doesn’t have purpose and I give it purpose. I recycle things.”

Banks has produced and directed more than 37 films since 1989. His films have been screened at numerous prestigious film festivals and art institutions, both domestically and abroad, such as Sundance Film Festival, SXSW Film-Music Festival, International Film Festival Rotterdam, Museum of Modern Art, The Robert Flaherty Film Seminar, Chicago Underground Film Festival, and in Ann Arbor. He is the recipient of the Filmmaker of the Year at the Midwest Filmmaker’s Conference among other awards. Yale University Film School, Richmond University, The American University in London and The Walker Center for the Arts all own 35mm film prints of his work. He is also featured in the book Making Images Move: Handmade Cinema and the Other Arts by Gregory Zinman. Banks tries to balance filmmaking, commercial work, teaching photography and caring for his mother, Nelly Banks.