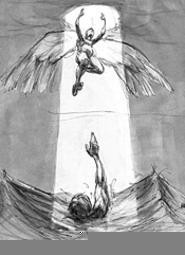 As summer winds down, we're gonna look back at the Movies Under the Stars series as a highlight of 2005. Tonight's free outdoor showing of Finding Neverland caps the season on a thoughtful and poignant note. Last year's tearjerker about playwright J.M. Barrie's efforts to launch his masterpiece, Peter Pan, and the inspiration he finds in his relationship with three fatherless boys, doubles as a rumination on childhood, adulthood, and the space in between. Bring along plenty of Kleenex for the 8 p.m. screening at Mall B (next to City Hall, off Lakeside Avenue). Admission is free; call 216-696-2122.

It's been five years since hometown rock-poster artist Derek Hess opened a new Cleveland show. But you can't blame the guy. He's been overseas (in Switzerland, Berlin, and Hamburg) and across the country (in Los Angeles) exhibiting his work. He also launched the Sthress clothing line, two concert tours, and five music festivals (loaded with blistering hard-rock acts). In I Bet You Think These Drawings Are About You (opening today at 1300 Gallery), Hess adds more than 50 small drawings to his oeuvre. And while the size is different -- Hess' towering posters of the past dwarf the new illustrations -- the themes remain the same: death, despair, and loss. It's deep, depressing material, but few contemporary artists do it as well. There's an opening reception at 1300 from 7 to 10 tonight. The show is on view through September 25 at 1300 Gallery, 1300 West 78th Street. Hours are noon to 5 p.m. Monday through Friday. Admission is free; call 216-939-1300.

A pair of exes, whose lives interconnect even after their divorce, are at the center of Kings and Queen. He's a classical musician who's been (mistakenly, it seems) committed to a mental home, where he hits on fellow patients. She's an art curator juggling a dying father, a moody son, and her own romantic grief. This French import sounds like an absolute downer, but director Arnaud Desplechin deftly bridges comedy and tragedy with plenty of surreal moments. The twisty narrative -- which includes flashbacks and subplots -- will keep you on your toes. Kings and Queen plays at the Cleveland Cinematheque (11141 East Boulevard) at 9:15 tonight, 7 p.m. tomorrow, and 3:30 p.m. Sunday. Admission is $8; call 216-421-7450.

The paintings and mixed-media pieces on display at The Artzreach Project come courtesy of the residents at the Lorain County Detention Home. The program gathers dozens of pieces of artwork created over the past year by juvenile offenders. And if the crude paintings and drawing reveal the artists' relative inexperience, a brutal honesty tears through the work. The Artzreach Project is on display through October 1 at the Firelands Association for the Visual Arts, 39 South Main Street in Oberlin. It's open from 11 a.m. to 5 p.m. Tuesday through Saturday and 1 to 5 p.m. Sunday. Admission is free; call 440-774-7158.

There are many things to like about today's Berea Arts Fest, which celebrates its 15th anniversary this year. More than 80 artists will display and sell paintings, pottery, jewelry, baskets, woodwork, photos, and more. There's also live music by the 19th-century-folk-song-lovin' Elixir, the a cappella group the Nitelites, and the Beatles tribute band Eight Days a Week. There's also a Family Art Park, where kids can decorate the sidewalks with chalk and make something to take home. But it's the Instrument Petting Zoo -- an area lined with all sorts of musical devices to pick up and play -- that has us totally pumped. We only hope our mad tambourine skills can be of use to Eight Days a Week. The fest happens from 10 a.m. to 5:30 p.m. along Coe Lake, behind Berea City Hall (11 Berea Commons in Berea). Admission is free; call 440-891-1102.

Mary Timony's first two solo albums came on like prog-rock opuses dipped in Stevie Nicks' witchy-woman magic. On her new CD, Ex Hex, she steers back to the noisy indie rock she made with her fine '90s band Helium. It's not a faultless record -- you still expect a one-eyed giant to show up in some of the songs -- but with a solid band and her often-airy voice aggressively cutting through the clatter, Timony mostly steers clear of fairyland. She's at the Lime Spider (207 South Main Street in Akron) at 7 p.m. Tickets are $5; call 330-762-2350.

In Beautiful Dreamer (at Spaces), more than two dozen artists explore the world of dreams with paintings, sculptures, and video installations. Images range from the fanciful (a figure in 17th-century garb launches a pair of ships) and the terrifying (a torrential storm blows through the countryside) to, of course, the sexual (an orchid and a woman's body merge into one colorful blossom). Beautiful Dreamer is at Spaces (2220 Superior Viaduct) through October 23. It's open from 11 a.m. to 5:30 p.m. Tuesday through Thursday, 11 a.m. to 9 p.m. Saturday, and 1 to 5 p.m. Sunday. Admission is free; call 216-621-2314.

Like former tourmates Howie Day and Gavin DeGraw and current road buddy Josh Kelley, teen-friendly singer-songwriter Michael Tolcher isn't afraid to get all sensitive once in a while. He's also not averse to busting some white-boy funk moves. One of the cuts ("Sooner or Later") on I Am, his debut album, served as the theme song to the short-lived TV show Life as We Know It, and an early proponent of Tolcher's music was, of all people, Tupac Shakur's dad. But the Georgia native thinks deeper than his list of accomplishments lets on. He comes loaded with hooks and an effortless style. Tolcher's at the Odeon (1295 Old River Road) at 7:30 tonight. Tickets are $15; call 216-241-5555.