Touring Production of "Cats," Now at Playhouse Square, Is a Predictably Love-It or Hate-It Experience

Prepare for the puns 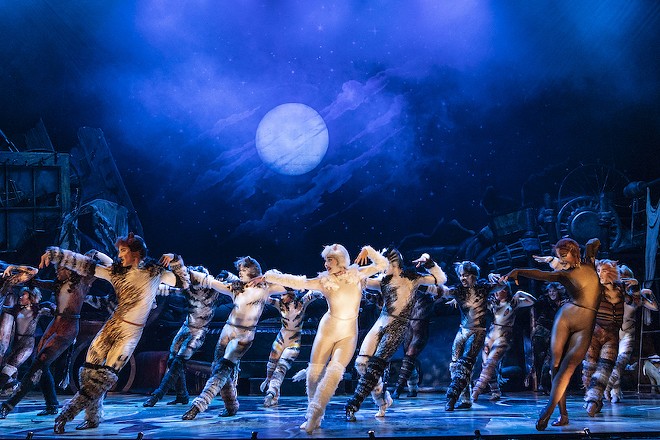 The new touring production of Cats is now in residence at Playhouse Square, in the just-turned-100-year-old Connor Palace Theatre. And let's face it: people who love Cats really love it. But for those who don't, this collection of singing and dancing actors dressed as tabbies is like claws on a blackboard. Over the past 40 years since it traveled from London to Broadway, those two audience groups have grown in vociferousness until damn near everybody has a strong opinion— catnip for some, catatonia for others.

(Note: Allow me to pause and apologize for any cat puns that appear in this review. Theater critics are only human, and only the strongest among us can resist throwing in gratuitous wordplay concerning cats and their feline ilk when discussing this show.)

As you might know, the aptly-titled play is based on the T.S. Eliot children's book, "Old Possum's Book of Practical Cats," a whimsical 1939 collection of poems about a community of "Jellicle" cats, a made-up name for a gaggle of junkyard mousers who embody a wide range of personalities along with catchy dance moves and kickass singing voices.

The plot, such as it is, revolves around the annual Jellicle Ball where one cat is selected for the grand reward of rebirth to the "heaviside layer" by the group's ancient paterfamilias, Old Deuteronomy. (Fun Fact: The heaviside layer is not a creation of Eliot's fertile brain, it actually is layer of ionized gas in the atmosphere—a description that some would claim describes the show in its entirety. But I digress.)

Aside from that concluding moment, the remainder of the playing time is spent introducing a dozen of the cats, each of whom, we are instructed, come equipped with three names: The name the family calls them, a more dignified name, and a third name "the cat knows but will never confess."

Among these solo songs, snappy turns are handed in by Hank Santos as Rum Tum Tugger, the hyper rock-star cat who's "always on the wrong side of every door" John Anker Bow as Gus the Theatre Cat. His high point is when he reminisces about and then reenacts his crowning moment on stage when he "made history as Firefrorefiddle, the Fiend of the Fell."

In those two numbers and in others led by Skimbleshanks, the Railway Cat (John Zamborsky) and McCavity, the Mystery Cat (Sam Buchanan), the blend of Eliot's inventive words, the music composed by Andrew Lloyd Webber, and the performances combine to achieve a theatrical state of grace.

With some of the other ditties, one element of another goes missing. When Mungojerrie (Brian Craig Nelson) and Rumpleteazer (Taryn Smithson) do their duo bit, it seems as if they've just met backstage and their dance feels a bit uncertain and under-rehearsed. And not enough character is explored by Bow as Bustopher Jones: The Cat About Town and Ibn Snell as Magical Mister Mistoffelees in his coat of many changing colors. They don't have enough fun underneath their costumes and trademark moves.

Of course, Grizabella, the Glamour Cat—bedraggled, decrepit, and shunned—is often the star of the show since she delivers the one killer song that has been recorded by most lounge singers over the years. As Griz, Tayler Harris negotiates "Memory" with technical precision, but even wearing a limp gray coat of fur and walking with a chronic slump she doesn't seem as aged or world weary as she should. Her sad condition is belied by her bright red lipstick (Dior Rouge?) and sparkling white teeth. Apparently, she sees her junkyard dentist regularly.

The choreography by Andy Blankenbuehler is a given, handed down for the most part by the original created by Gillian Lynne. It is sinuous and cat-like, of course, but the stretching, curling, and prowling eventually become rote and it feels like you're watching a really advanced aerobics class. The direction by Trevor Nunn (who wrote the lyrics for "Memory") is in place and operating smoothly, along with the mostly static set design and the special effects.

Cats is an acquired taste, but this version has enough high points to recommend it if you're not one of those for whom a cute play about cats is categorically catastrophic. In that case, this show might even be cathartic.