Give yourself some goosebumbs ahead of the election 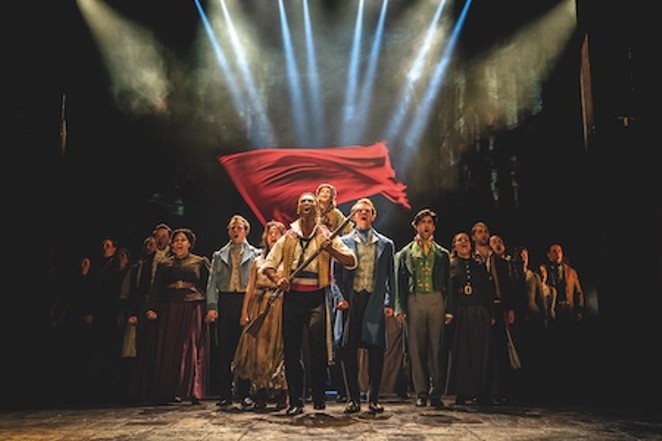 The French Revolution is back on stage at Playhouse Square, in the familiar form and sounds of the magnificent "Les Miserables." And it's here just in time for us to contemplate, prior to next month's elections, what it takes to achieve and ensure a liberal democracy. Indeed, our is a democracy in danger of being erased by angry mobs who, in a ghastly reversal of script, would like to replace liberté, egalité, fraternité with bigotry, conspiracy, and thievery.

Cleveland is the first stop of this major new tour, and while it is a joy to behold—truly a visual and auditory groaning board of delights—not everything is, as you might say, la crème de la crème.

For the unacquainted, this musical is based on the 1862 epic, eponymous novel by Victor Hugo that featured put-upon protagonist Jean Valjean and his purloined loaf of bread. It has twisted the tear ducts of readers and theatrical audiences for decades.

After years of imprisonment for that theft, Valjean escapes, commits another theft but is reprieved by his victim, a kind Bishop, and turns his life around as he tries to redeem himself with Javert on his heels and the streets alive with revolt. There are also subplots involving the working girl Fantine and her daughter Cosette, as well as the street-smart Eponine and the young men ready for the revolution,. And who can forget the scuzzy Thernardiers, hoteliers from Hell.

That's a lot of story to jam into a 2 1/2 hour show, performed largely in song and recitative, but the music by Claude-Michel Schönberg and lyrics by Herbert Kretzmer are more than up to the task. And so is the cast, for the most part.

In the linchpin role, Nick Cartell is a vigorous young Valjean early on and he ages his character gracefully as the play rips through the calendars. He also gives splendid voice to Valjean's familiar solos such as his early "Soliloquy" and the tortured "Who Am I." Of course, the killer song for this character is Act Two's quietly wrenching "Bring Him Home." Cartell does it full justice. But as far as local performances go, the rendition of that song eight years ago by Stephen Mitchell Brown in the Great Lakes Theater production still wins the prize.

That's part of the magic of this show. The memories stay with you, along with the full complement of goose bumps. In this production, Preston Truman Boyd almost stops the show as Javert when he nails "Stars," especially when he shifts into a different gear in the last line, "This I swear by the stars." Although not imposing physically, Boyd creates a suitable villain all the way through his climactic plunge.

Other standouts include Haley Dortch as Fantine, doomed mother of Cosette and Christine Heesun Hwang as street-smart Eponine, who brings all the emotion and then some to "On My Own." As the Thernardiers, Matt Crowle and Christina Rose Hall work it hard, but they never quite embody the level of sleaze those roles demand. As a result, their star vehicle "Master of the House," with its witty but busy blocking, doesn't quite have the impact it should.

One of the most famous scenes is when the citizens of Paris take to the barricades, but in this production there's something missing. In one example, the tragic death of young Gavroche during a horrific gunfight is played out with overly operatic grandeur, missing the immense power that an understated staging can provide to that moment.

The production's skillful designers use projected images inspired by Hugo's own original artwork along with cinematic movement that, combined with the massive yet fluid set pieces, make the scene changes so smooth as to be almost intuitive. The stage is often sunk in shadows and darkness by lighting designer Paule Constable, an effective mood setter. But that turns other scenes into visual mysteries, and not the good kind.

With that said, directors Laurence Connor and James Powell mount a grand and stunning spectacle. This is a full, unadulterated dose of big and ballsy Broadway brawn. So, if your goose bumps have been rendered dormant by worries about the coming elections, treat them to a therapeutic jolt of Les Miz.