There always seems to be somewhere new to go these days — some new joint that has popped up in the latest, trendiest neighborhood. But readers hold a soft spot in their heart for Liquid, which has been a nightlife mecca for 19 years. Brent Lewanski, who also owns Westpark Station, McCarthy's in the Flats and Avenue Taphouse, is more than an entertainer — he's a West Sixth ambassador and has fought to keep the Warehouse District safe and fun for everyone. "West Sixth Street has had its ups and downs," he told us last summer, "but there are so many positive things happening in Cleveland that are based around that area. I think the street represents the city in many ways." We couldn't agree more. Liquid packs 'em in with the hottest DJs and best dance music around, and once the friendly staff is done taking care of you, they take care of their own on Sundays. SIN night is that chance for the city's bartenders and waiters to finally enjoy their weekend, and Liquid's Sunday evening deals give them a chance to enjoy the scenery from the other side of the bar. Stop by for one of the DJ sets, comedy on Mondays, or Taco Thursdays (yes, Taco Thursdays). 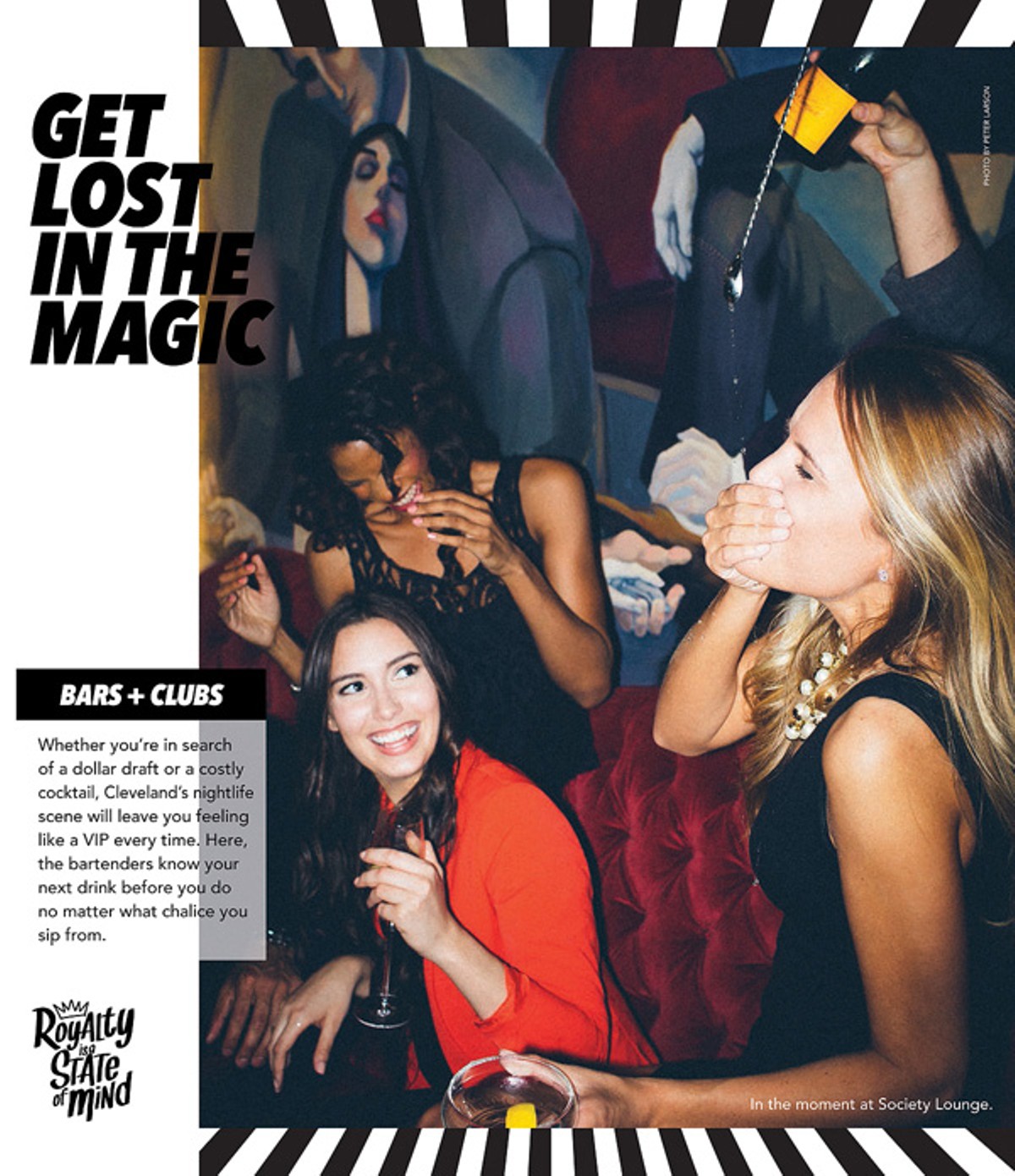 Cleveland has more single people than just about any city in America, which means a lot of us are looking for love, or simply someone to put down their phone for a second and actually talk to us. And sometimes not even that much. The Barley House, readers say, is ground zero for meeting that special companion. You really can't go wrong by sidling up to the bar and starting with some liquid courage. And the music ain't bad either. You can talk about that and bob along. The West Sixth hot spot draws gaggles of girls and guys, all basically wanting the same thing, and it's easier to do these things in crowds. Someone knows someone who can introduce you, and dinner's right there at the ready if you get paired off. If not, there's probably a DJ set or a bottle service table to keep things moving until everything becomes hazy enough where you somehow appear charming.

Thursday nights at Brothers Lounge are when the Bad Boys of Blues take over, throwing down a mean set as the house band and then opening up the stage to musicians of all ilk until the wee hours of the morning. Simply put, this jam melts faces. And the rest of the week features top-tier music, as well. Other mainstays include Brent Kirby's awesome 10x3 events on Wednesday nights in the wine bar, Mojo Big Band and Velvet Voyage setting up on the venue's two stages on Monday nights, and a host of local blues titans throughout the weekend. The food is excellent too. And as guitarist Michael Bay is keen to remind you, the beer is cold. Have a whole bunch and tip your server well.

In terms of comedy clubs, no one really holds a candle to Pickwick & Frolic. Their prime location on East Fourth Street in the heart of one of downtown's hottest social districts is a serious leg up, but it's the consistently stellar programming — Jon Lovitz, Kevin Pollak and Dave Attell are all headlining at Hilarities in June alone — that makes this one of the best and most unique restaurants and comedy clubs in the city. With multiple theaters and bars on its kickass comedy campus, Pickwick is perfect for a date night or even a nightcap after a Cavs or Indians game — and you'll certainly need the laughs after the tragedies you're likely to endure witnessing Cleveland sports. Go for the laughs. Stay for the laughs. Then go again for the laughs.

Cleveland is a shot and a beer town and the Harbor Inn has been slinging those for over a hundred years — it's the oldest continuously operating bar in Cleveland, don't you know. Four decades ago, Wally Pisorn bought the place and, well, didn't do much to change it. The Harbor is still a melting pot that pulls from every demographic in the city. From the few remaining dock workers who pull up a barstool when you're having breakfast to the twentysomething crowd that comes pouring in before concerts or games, Wally's World is our world. In a city known for its affordable booze, the Harbor Inn is comparatively cheap, which basically means drinking is essentially free. It's a Bar's Bar. Plus, where else will you find a pick-a-prize machine in Cleveland?

Bounce has been the LGBT mainstay outlet of adventure and partying for years now, and folks keep coming back because no one does it better. From Top 40 dance hits and pulsing strobe lights to leather, mesh and any other fetish you can dream of, Bounce is welcoming and encouraging. The weekend drag shows are just one of the popular reasons people flock to the Detroit Avenue club, but the comfy sofas lining the lounge and the raised dance floor mean there's something for you here, whether you're on the market for a pal or a straight hanging out with friends for the night. Bounce attracts everyone — everyone — and that's just about the best compliment a bar of any kind can hope to receive.

With a steady cast of gorgeous dancers and a long list of temporary attractions — they've hosted porn star Emily Austin and "world famous" Chelsea Charms (the proud owner of "the world's biggest augmented breasts") so far in April — Scene readers chose Christie's as the best place to go for naked women and alcohol. The club in the Flats boasts it's "the finest east of the Mississippi River," highlighting their "VIP Champagne Suites" with fireplaces, plasma TVs, karaoke and XBox systems (because people love playing video games at strip clubs). For the gentleman who desires a little female company, for the bachelor party sect and for the out-of-towners who can't stand one more night in an empty, lonely hotel room, Christie's is the high-class strip joint that'll make you feel at home (and other things.)

A local poet and musician who moved to the San Francisco Bay Area a few years back, Daniel Gray-Kontar wanted to start up a monthly hip-hop night after he returned to Cleveland in 2013. In the '00s, the Rhythm Room was the go-to place for rap and hip-hop acts. But it hasn't been open for years. So Gray-Kontar approached the folks at Touch Supper Club, one of the best places in town to hear cutting edge electronic dance music, and launched Sanctuary Cleveland, a showcase for local and national hip-hop acts. It takes place the first Saturday of every month and locals Gray-Kontar, Kinetik, Red-I and Eso regularly spin downstairs while veteran local DJ Mike Filly provides the "soundscape" for the first floor. Touch is also home to I Got 5 On It, the popular old school hip-hop night that is the best excuse not involving a wedding to get on the dance floor.

Happy Dog won these two categories last year, so it's no surprise the Detroit Shoreway concert club and restaurant takes top honors again this year. The place has a cool vintage look and its band-friendly approach (acts play for the door money) makes it an attractive venue for up-and-coming local and national indie rock bands. The club also hosts a monthly classical music jam night and a variety of lecture series with local intellects and writers. Last year, the Cleveland Orchestra launched a residency program that included performances at the Happy Dog and at other venues in the Gordon Square Arts District. Happy Dog owner Sean Watterson was the catalyst that helped make the event happen. The guy is clued in to the local music and arts scene and has the ability to bring together artists and intellectuals from a range of disciplines. And, of course, the $5 dogs with limitless toppings are scrumptious.

For 10 years in a row, Downbeat magazine has voted this Cleveland Heights restaurant and club one of the best jazz clubs in the country, and it certainly lives up to the rep on a regular basis. Booked by locally based Jim Wadsworth Productions, the club regularly brings major jazz and world beat acts to town. When Motown icon Stevie Wonder was in town in 2010 to receive an honorary doctorate from Oberlin College, he stopped at Nighttown to play an impromptu set. Jazz guitarist Charlie Hunter might be better suited to play some of the rock clubs in town, but he prefers Nighttown and has even debuted new music at the place. On occasion, singer-songwriters such as Carrie Rodriguez and J.J. Cale will play the club too.