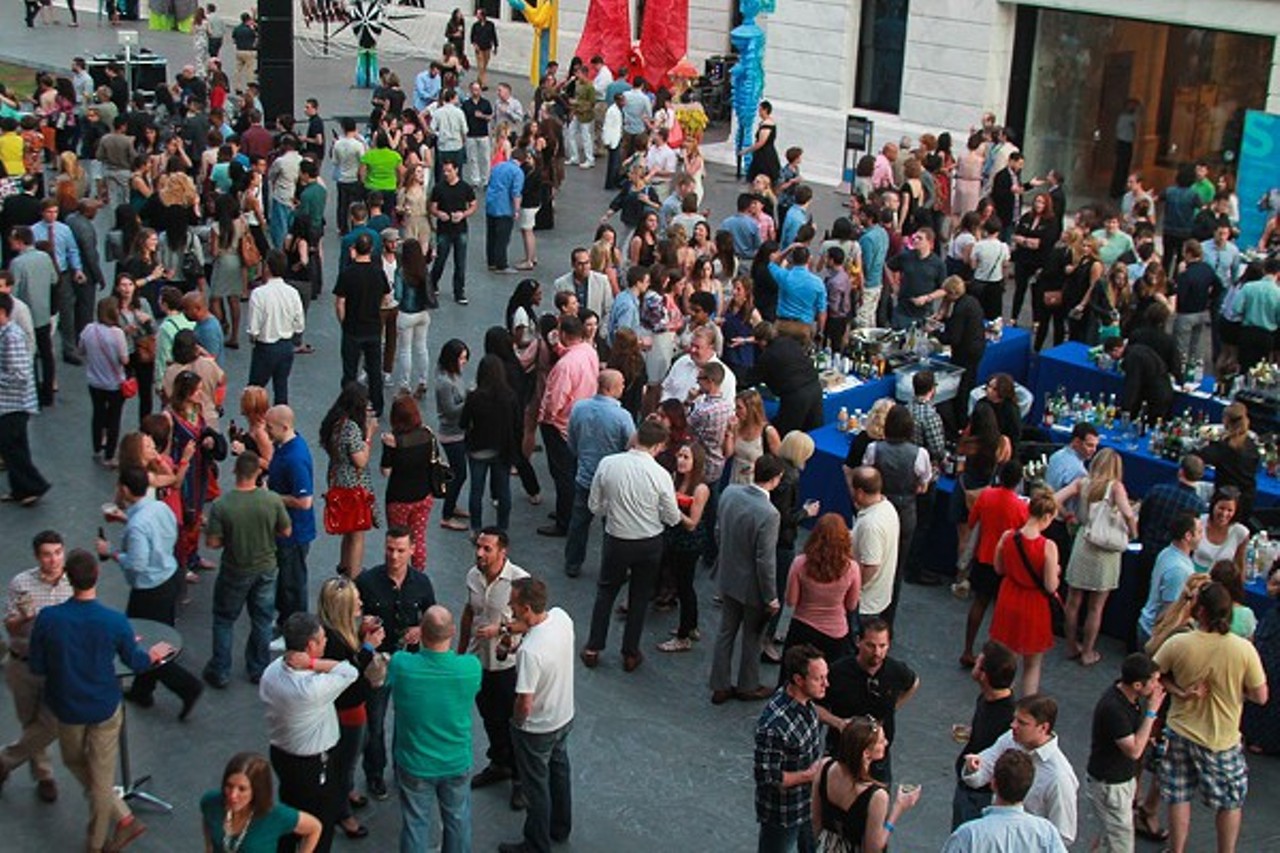 Photo via Cleveland Scene Archives
After an Independence Day hiatus, the Cleveland Museum of Art’s MIX party is back today with “Caliente.” This evening’s shindig celebrates Latin American culture and life in the Cleveland summer heat. The 15-piece tropical band Grupo Fuego will kick up the spicy vibes and Tropical Cleveland will be on hand giving salsa lessons. This is all happening on the museum’s gorgeous south terrace, but you can always take a break from the heat to explore the galleries inside (like the Mesoamerican exhibit). As always, cocktails are involved and it’s the perfect way to kick off your weekend. Tickets are $10 in advance and $12 day of. (Trenholme)

Photo Courtesy of clevezoosociety, Instagram
Some 18 local acts are slated to perform at this year's Twilight at the Zoo, an annual event that turns the Cleveland Metroparks Zoo into a party zone. The facility opens at 7 p.m. and stays open until midnight. The ticket price is a steep $80 but includes "small bites" and complimentary Sam Adams beer, Twisted Tea, wine and soda. The music runs a wide gamut and includes everything from funk and reggae to folk and rock. (Niesel)

Photo Courtesy of Scene Archives
The way Rascal Flatts arrived on stage for its performance last summer at Blossom, you would have thought the guys were the newest boy band to hit the circuit (though they’re clearly too old for that). They started their set off with a cover of the cheesy pop tune “Life is a Highway” and then proceeded to play many of the 14 number one hits they’ve had over the course of their 13-year career. Band leader Gary LeVox really has an incredible voice. The guy effortlessly dipped into R&B and gospel on songs such as “Prayin’ for Daylight” and “What Hurts the Most.” Pairing up with pop singer Sheryl Crow for this tour makes a ton of sense. Crow certainly isn't country but she has broad enough appeal that the Rascal fan base should readily embrace her. (Niesel) $36-$76

Photo Courtesy of cosmicgirlgoes, Instagram
A hub of culture, the Lakewood Arts Festival draws the attention of local — as well as national — artists. Prizes are awarded to the three best pieces, as well as the best artists. Muse over art of all kinds, ranging from jewelry to glass to photography. Live music is also included in the package. While you're there, pick up this year's T-shirt; a new design is created annually, and the money goes toward the fest's scholarship fund for high-school artists. The fest kicks off at 10 a.m. on Detroit Ave. between Elmood and Marlowe. (Cortni Dietz)

Photo Courtesy of joeoravec3, Instagram
Everyone loves a good summertime party. That's the thinking behind today's Summer! Poolooza slated to take place at the Barley House from 1 until 8 p.m. The event kicks off with a set from DJ Kosher Kuts, one of Cleveland's best DJs, and includes the Ms. Ohio Tropic Beauty Model Search Finals and a trip giveaway. Celebrity DJ Taryn Manning – also known as Pennsatucky from Orange is the New Black – will also be making an appearance. The club is putting in what it says is an Olympic size pool (we're hoping to get in a few laps before it's too crowded) and a swim-up bar. You can play beer pong or take a dip in the hot tub too. Tickets start at $15. (Niesel)

Photo Courtesy Euclid Beach Blast, Facebook
The Euclid Beach Blast celebrates all that is summer. Today from 4:30 to 8:30 p.m., you can hang out on the shores of Lake Erie and listen to live music while participating in activities and games. The Beachland Ballroom and Tavern is sponsoring the local music stage so you know the bands will be good. You can test your sand sculpting skills at the Waterloo Arts Sand Castle Contest, and sand sculptor Greg Batauski will have his work on display. If you bike to the Blast, you can park in the Ohio City Bike Co-op Bike Corral or go on the neighborhood bike tour. Several food vendors will be on hand. Admission is free. (Niesel)

Photo Courtesy of bmckay89, Instagram
It’s playoff season in Cleveland, sports fans. We’re not talking about the Rockers — our dear WNBA franchise kicked the bucket in ‘03. We’re talking about the Cleveland Gladiators, the arena football megastars who have taken their league by storm this year. They’ve cruised to 17-1 regular season record, easily winning the Eastern conference and shattering the spirits of their competitors. Their first playoff opponent is yet to be determined (it’s a wild card slot) but come out and support the postseason run of Cleveland’s most dominant team tonight, regardless of who will be slaughtered. Kickoff at the Q is at 7 p.m. and tickets start at only $10. (Allard)

Photo Courtesy of Scene Archives
Hit up the last day of the 10th annual Holy Family Parish Festival. Pay a visit to the wine and beer garden and participate in such frivolities as bingo (not just for the older folk) and Texas Hold ‘Em and a casino. It’s air conditioned, there’s a polka band and dinner at 1, and it’s free. Grab a bite to eat, a brew, and try your hand at some of those old-fashioned games. What more could you ask for on a Sunday afternoon? Head out to the Holy Family Church in Parma and visit www.holyfamilyfestivalparma.webs.com for more info. (Dietz)

Photo Courtesy of Martijn van de Streek, Flickr Creative Commons
In cuing up Ingrid’s “Girls Chase Boys” from this year’s Lights Out, two things are immediately clear: She can still write a helluva hook, but over her 12-year career she’s drifted pretty far into pop territory. The new album is fine stuff, but her earlier albums — all bare and riddled with gentle acoustic vibes — dabbled in more interested song structures. Be OK remains the high-water mark of a terrific career amid the indie scene. “Lady in Spain” ranks among her best works (those chords!), kicking around imaginative lyrics that take listeners’ minds for a real trip. For musically edgier fare, check out 2006’s Girls and Boys, which finds Ingrid experimenting with all sorts of great sounds. Listen, her catalog is awesome; don’t sleep on the early LPs. (Sandy) $27 ADV, $30 DOS