Alley Cat Finds its Home On the Water 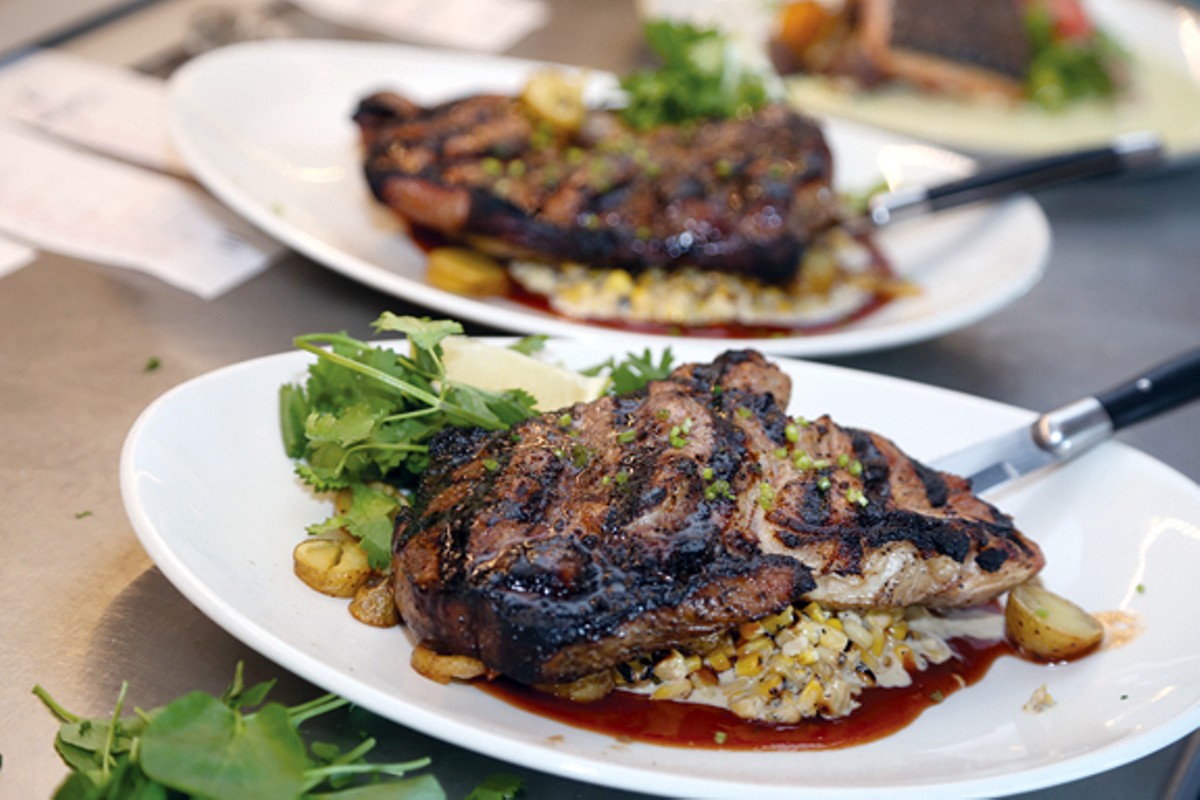 Slurping raw oysters at the bar in Alley Cat, with the full expanse of the restaurant opened up to the river, we enjoyed views of the neighborhood in ways we haven't in ages. Slender, slippery rowing shells glide by titanic freighters. Architecturally striking bridges, viaducts and overpasses pepper the landscape. People, so many people, amble down the boardwalk to savor the setting sun.

And to think, just 45 years ago this place burned like Hades.

Of all the shimmering new spots down by the river, components of the sprawling Flats East Bank development, none feels more at peace with the environment than Alley Cat. The restaurant, the latest from charmed operator Zack Bruell, enjoys prime boardwalk frontage near the mouth of the Cuyahoga, and the faded wood exterior appears weathered from years of salty ocean breezes. Inside, the meandering restaurant has the feel of a maritime vessel thanks to low-slung ceilings with exposed mechanicals painted submarine gray.

Thanks to Bruell and his colleagues, the Flats are being introduced to a new generation of residents and visitors who have little if any recollection of the historic neighborhood's epic highs and lows. Say what you will about the volume of new restaurants, there is no arguing that our waterfront is an asset worth cultivating.

Bruell is the only operator down there who bothered to tailor both design and concept to the watery surroundings. In addition to its breezy nautical abode, Alley Cat debuted a seafood-heavy menu that stands out both from its neighbors and the chef's numerous other restaurants. Think SoCal-style fish house with some Latin riffs. Fat and crusty crab cakes ($16) are paired with Green Goddess dressing, a West Coast staple. In addition to an all-American shrimp cocktail ($12) served on ice, Bruell introduces Midwest diners to the refreshing Mexican-style seafood cocktail, a tall glass filled with shrimp, squid and scallops in a spicy tomato broth.

It might sound like a truism to state that oysters are best enjoyed in places that sell bushels of oysters, but fast-moving inventory is easy to taste. Alley Cat serves them raw, baked, fried and Rockefeller-style ($12), roasted in the shell with watercress and fontina cheese beneath a crispy crumb topping. Skip the baked variety ($14), which are like oysters with training wheels, cooked just long enough to make them attractive to folks who can't stomach them raw. Despite a roster of nearly a dozen varieties on the menu, the restaurant only offers three or four types per night.

It's natural to assume that a seafood restaurant, much like a steakhouse, is out of reach for modest budgets. But Bruell has always been a mensch when it comes to seeding his menus with economical options. Rich or poor, every diner should kick off the meal with a cup of absolutely perfect New England clam chowder ($4), a model of the form. Whereas the chowder is all creamy and luscious, the Mediterranean bisque ($4) is smoky, earthy and complex, offering a quick trip to the South of France in a bowl.

For just $17 a diner can net an unfussy quesadilla, a well-griddled flour tortilla folded around chopped seafood and melted cheese, served with salsa and sour cream. Or, for $32, a person can dig into a crispy whole fried snapper, served Asian-style with head, cheeks, bones and tail. It's dramatic and delicious, perched atop a fragrant Thai-scented sauce, but be prepared to extract countless bones from your mouth as you eat. We had a similar experience with the grilled pork steak ($20), a deeply flavorful cut of meat that was exceedingly chewy and riddled with connective tissue. Meat-eaters might be better off ordering the chili braised beef with tostones or the one-pound USDA Prime ribeye, depending on the budget.

Sandwiches like the Maine lobster roll ($22), loaded with Old Bay seasoned meat, and the fried perch ($16) with fontina are almost worth ordering just for the amazing french fries. A dish that earned faint praise is the grilled octopus ($20), which gets lost among an ocean of accompaniments like bacon, succotash and smoky mayo.

I can't predict what the Flats will feel like come winter, but I do know that spending a sun-soaked afternoon at the bar when the garage doors are raised high is as close to "getting away from it all" as one can get in the 216. Happy Hour is flush with two-dollar oysters, four-dollar glasses of crisp Vinho Verde, and zesty micheladas, chile-tinged beer cocktails that taste like a Mexican beach vacation. It's a delicious way to experience Old Cleveland in an entirely new light.