Arthur Treacher's Fish and Chips is Alive and Well in Cleveland Few dining experiences manage to live up to indelible memories of meals shared with family. But one bite into the corn-scented hush puppies at Arthur Treacher’s Fish and Chips in Garfield Heights and I was instantly transported back in time to the restaurant on Mayfield Road. In the mid-1970s, that store, with its iconic yellow and green lantern sign, was the unanimous fast-food favorite among me and my brothers. The seafood-focused menu felt a bit more upscale than the run-of-the-mill burger barn and dousing everything with malt vinegar seemed pleasantly foreign and exotic.

Despite practically vanishing from the face of the earth, Arthur Treacher’s Fish & Chips has been making the rounds on the news circuit lately. That’s because parent company Nathan’s Famous recently announced plans to expand the historic brand’s presence by offering ghost kitchen franchises.

“Nathan’s Famous and Arthur Treacher’s have a long standing relationship and we have worked diligently to keep the brand’s traditional menu items while also evolving the menu to fit the Nathan’s mantra of ‘Craveable, Memorable and Instagrammable’ product that we believe both operators and customers will love,” states Nathan’s Senior VP James Walker.

Things start getting more confusing when one attempts to link Nathan’s version of Arthur Treacher’s with the last two brick-and-mortar restaurants of the same name, both of which are located in Northeast Ohio. Those restaurants are owned by Ben Vittoria, who has been involved with Arthur Treacher’s since the mid-1970s.

“We have a unique situation,” Vittoria explains. “Arthur Treacher’s has been sold a number of times, and one of the companies retained the rights to Ohio and Virginia. So we have really no relationship with Nathan’s.”

Few people alive are more knowledgeable about the iconic brand’s rise and fall than Vittoria. After joining the parent company at the corporate level in the 1970s, he switched to the ownership side, purchasing the Cuyahoga Falls location in 1988 and the Garfield Heights shop in 2001. In 2005, he relocated the Cuyahoga Falls store from its original 1972 building to a former Wendy’s with a drive-through window.

Arthur Treacher’s started in Columbus in 1969, eventually growing to a national chain of more than 825 locations. By most accounts, the two Ohio stores are the very last standalone restaurants offering the original menu starring hand-battered fish and chips.

“Most of the old franchisees have reached an age where they have retired or passed away,” he says. “Others have decided to change to something else.”

Because Vittoria worked for years at the corporate level, he’s familiar with the original recipes, seasonings and specifications, all of which he adheres to out of loyalty and continuity.

“There are a lot of dissimilarities between what Nathan’s uses today and what we use, because we continue to use the traditional Arthur Treacher’s chicken, shrimp and clams and I don’t believe Nathan’s is using any of those products,” he explains.

Both use the same batter and hush puppy mix, he adds, but Nathan’s uses crinkle-cut fries instead of the original thicker ridged “chips.”

I had always known that there was an Arthur Treacher’s restaurant 30 minutes from my house, but I never felt compelled to visit. It was only when I realized how few of them actually existed that I made note of going sooner rather later. The pandemic arrived and I worried that I might have missed my window. But survive they did.

“Like many restaurants we had to endure a period of uncertainty,” Vittoria says. “Not only did we have to deal with the pandemic, we had to deal with the rules and regulations from the CDC. But we adapted. It was easier at Cuyahoga Falls because of the drive-through. But in the last couple of months, we’ve seen a resurgence of people dining in.” 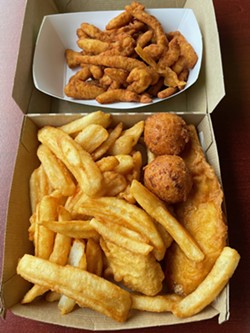 Douglas Trattner
The food is as good as you remember at Arthur Treacher's in Cleveland.
A couple weeks back I went to an Arthur Treacher’s for the first time in 40 years and ordered pretty much everything on the menu. I dunked the crispy pie-shaped fish fillets in tartar sauce. I dragged the squiggly fried clams through cocktail sauce. I doused those fat fries with too much malt vinegar. And I inhaled the heavenly hush puppies. I snapped pictures of my food and immediately texted them to my brothers so we could share the experience. Their synapses, too, dredged up decades-old memories of clam strips and hush puppies and paper boats.

Nostalgia is a powerful emotion, but is it enough to keep a business afloat?

“Arthur Treacher’s has a strong brand recognition and it always did,” says Vittoria. “This is a concept that started in 1969 and grew to 800-plus restaurants in the mid-70s. People brought their children and now they bring their grandchildren. And now I see millennials who come in and say I used to come here with my grandpa, or my mom used to bring this food home and we loved it.”

Barely a day goes by, adds Vittoria, that he doesn’t field a call from some wistful food tourist who heard that Arthur Treacher’s is alive and well in Cleveland, Ohio, and would he be open on such and such a date when he’ll be in town from Florida or Arizona or New Paltz.

Vittoria still loves the work, but he was not willing to place bets on its long-term survival.

“From a business point of view, I wouldn’t be working unless I believed it was worthwhile,” he says. “But I’m at the twilight of my experience with Treacher’s. Almost 50 years with the company and I have nothing but good memories.”