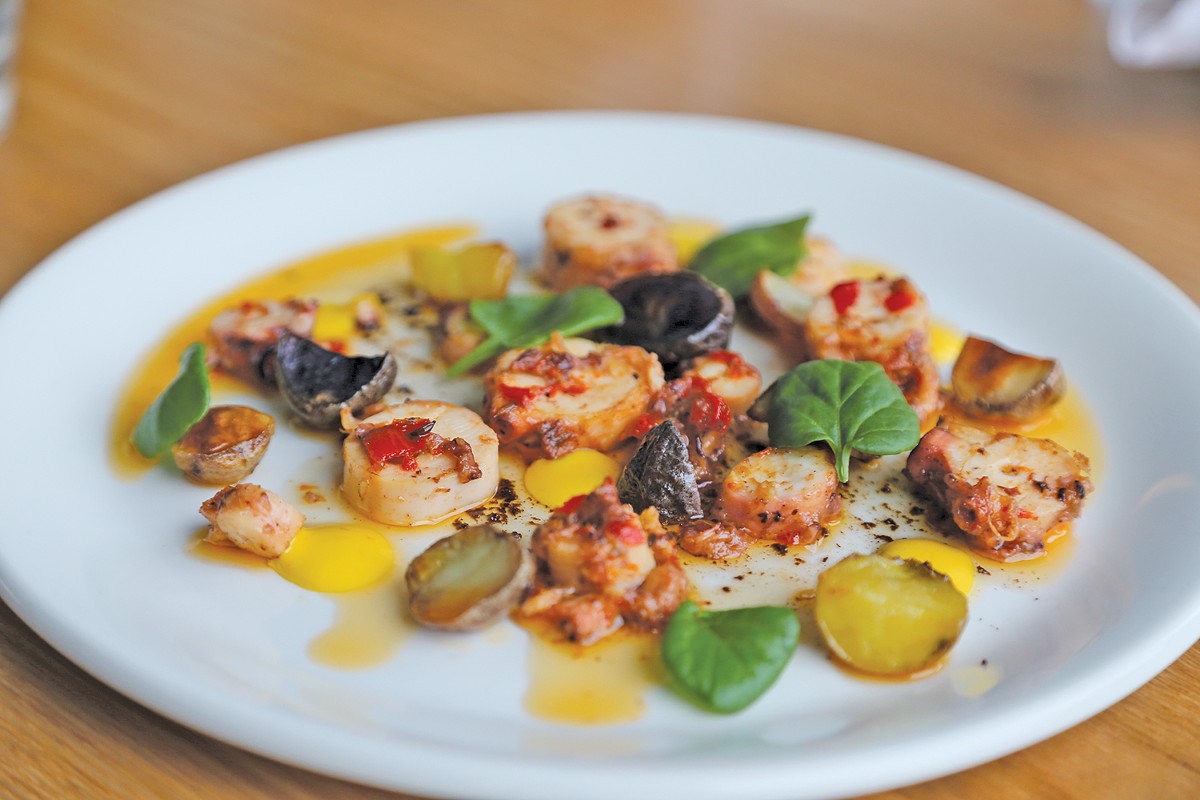 For most eastsiders, the drive up Cedar Hill into Cleveland Heights is so routine that few sights manage even to register. But lately, commuters have begun to observe thick knots of people milling about on the sidewalk, peculiar given the outdoor temps. Upon closer inspection, it becomes clear that these folks aren't waiting for the doors to open at some raucous concert club; they are scrambling for seats at Zhug, the latest restaurant from chef Douglas Katz.

With the unveiling of this new venture, Katz has created a new gravitational center for this side of town, attracting diners with such force that many get turned away. The beneficiaries of all that cosmic energy are "planets" like Nighttown, Parnell's Pub, Vero and the Fairmount, all of which eagerly absorb the overflow.

If your idea of Middle Eastern food consists largely of tightly wrapped falafel sandwiches, shawarma carved from a twirling spit and grilled beef shish-kabob on a bed of rice, Zhug will expand your culinary horizons in a million little ways. With its dazzling small plates, meticulously crafted cocktails and ripped-from-Tel Aviv-vibe, this cosmopolitan eatery upends every Cleveland dining convention.

It all starts with the environment, a casually sophisticated space with warehouse windows, high ceilings, low-slung furniture and restrained design elements. An open kitchen, prominent bar and club-like soundtrack prevent the mood from going gloomy, while the riveting 30-item menu promotes a spirit of adventure. What diners discover on the other end of that journey is a bazaar full of compelling spices.

At Zhug, humdrum hummus becomes a canvas on which to present bold ideas. The silky textured spread is sculpted into a vessel to receive ingredients like burnt onion and nigella seed ($9) or curried lamb with apricots ($14). In the former, bitter-sweet onions and herbaceous nigella seeds are joined by cumin and dried chili powder to create an earthy, smoky spread. In the latter, already a must-order dish, warm-spiced braised lamb is nestled into its hummus bed and topped with olive oil and fresh dill.

Before long, the table is festooned with beautiful pottery containing various dips and spreads like cool and creamy labneh ($5), rustic and smoky eggplant-based lutenitsa ($7) and plush, warm pita-like clay bread. The fun lies in building little bites of this and that atop the bread and hummus and capping it off with dollops of the namesake zhug, an electric-green chutney made with enough serrano peppers to KO Stipe.

Some diners might find the menu layout maddening as there is no clear division between vegetable, seafood and meat dishes. Not that there is a right or wrong way to proceed, but servers can be helpful when charting a course. Octopus ($14) is everywhere these days, but few preparations are as stunning as this. Coins of braised, cold-smoked meat are arranged like stained glass in crimson chili oil with quartered potatoes, olive puree and dollops of saffron aioli. Less ambitious but still satisfying, flattened and schmaltz-fried potatoes ($7) come with mustard creme fraiche. Duck fat fried parsnip pancakes ($11) arrive hot and crisp, but oozing oil. We also didn't go crazy for the whole roasted cauliflower ($12), which seemed stuck somewhere between raw and cooked, hot and cold, and bland and seasoned.

From the outside, the house-smoked pastrami ($17) looks like it might be dry. But these wide planks of shocking-pink meat are made from short rib, and they melt in the mouth. They come capped with pickled red cabbage and perched in a buttery celery root puree. In the hands of Katz and executive chef Andrew Mansour, a seemingly simple donut becomes an expedition down the famed spice route. Dosa-battered delicata squash rings ($11) are fried until golden brown, set atop a slick of chai-spiced glaze flavored with tea and cardamom, and drizzled with a clove-scented maple gastric. A tropical blood orange salad joins the plate.

After a handful of visits, we only scratched the surface, which is fine because a menu like this gives diners numerous reasons to return to try different dishes as well share old favorites with new companions.

Get to Zhug early on weekends and you battle the crowds for a table (the restaurant does not accept reservations). Sure, you can put your name in, walk down the block for a drink, and wait for the phone to buzz. Better yet, come during the week, or a little later in the evening on weekends when the place loosens up. As the early-bird crowds depart, they invariably are replaced by younger, thirstier diners with nowhere to go but the next course. The lights get dimmer, the music gets louder, and the wine and cocktails begin flowing like the River Jordan.