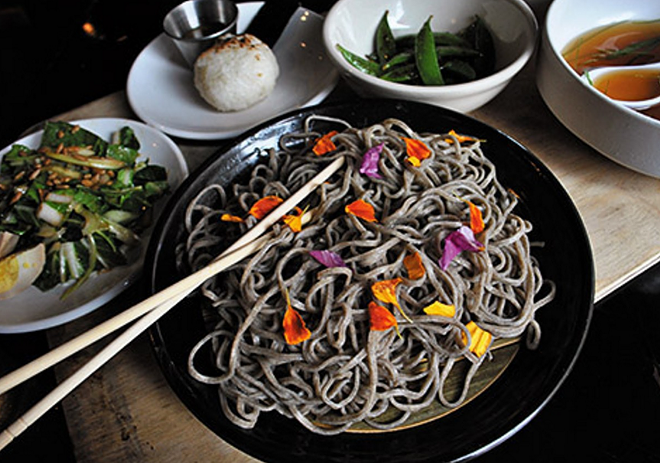 Yesterday, Team Sawyer announced to its followers on Facebook that Noodlecat would be closing its downtown location (234 Euclid Ave., 216-589-0007) on Saturday, August 12th. It was mighty short notice for fans of the noodle shop, which opened almost six years ago. In late fall, chef Jonathon Sawyer announced that Noodlecat would be opening a “second” location at Crocker Park, in the suburb of Westlake.

Now we know that that spot, when it opens later this year, will be the only Noodlecat location, at least for now.

Sawyer says that the decision to close downtown was nothing more than dollars and cents.

“The new design, innovation and tech that’s involved with Noodlecat [2.0] is not cheap and to do it downtown would cost as much as opening a new unit,” Sawyer explained. “At the end of the day, we were not prepared to open two new units simultaneously and we really felt that Crocker Park, and the customers that we have out there, would be as welcoming as the ones downtown. We finished five years, almost six, and we had a choice to make. At the end of the day we chose to move to a location that had more foot traffic at lunch and dinner.”

As for a possible outpost at the new Van Aken District, a development project at which Sawyer will curate and participate in the food offerings, the chef says that nothing has been decided. That will depend on the final roster of other food operators, he says.

The Crocker Park location represents a complete transition to a quick-serve style of service and the debut of "Noodlecat 2.0."

“Cleveland has been so good to Noodlecat over the years, and we’re thrilled to be able to show our appreciation by expanding our menu, hours and fresh new dishes,” Sawyer states. “Our flagship location at Euclid was an incredible first home, but we feel that the timing is right to close this location and focus all of our attention on Crocker Park and its Noodlecat 2.0 menu.”

From a release about the new spot:

"The brand new menu launching at the Crocker Park location will go beyond the traditional lunch and dinner offerings of noodles, buns, and veggies available at the original Cleveland location of Noodlecat on Euclid Ave. The menu has expanded to serve a wide variety of creative breakfast options, as well new lunch, dinner and kids menu dishes. The expansion represents Sawyer’s focus on offering guests fresher, lighter options with the same unique, innovative flavors and preparations they’ve come to know and love at Noodlecat. Along with offering more options for guests than ever, the addition of breakfast also expands Noodlecat's hours of service, which will be announced once finalized at a later date."

"The breakfast menu will include a variety of options; while the menu is still in development, several examples of its light, fun and inventive dishes include: Smoothie Bowls, Breakfast Ramen, Chia Pudding, Bacon Egg and Cheese Buns, Fresh Juices, Bubble Tea, Coffee and more. The lunch and dinner menu debuts brand new Noodle Bowls, Buns, and Salads, and will offer a new section of Side."

"The Kids menu avails small diners with the option of a Burger Bun or a Hot Dog Bun, all served with veggies, fruit, a drink, and a Noodlecat prize."