A balance of crust, sauce and cheese creates the perfect slice 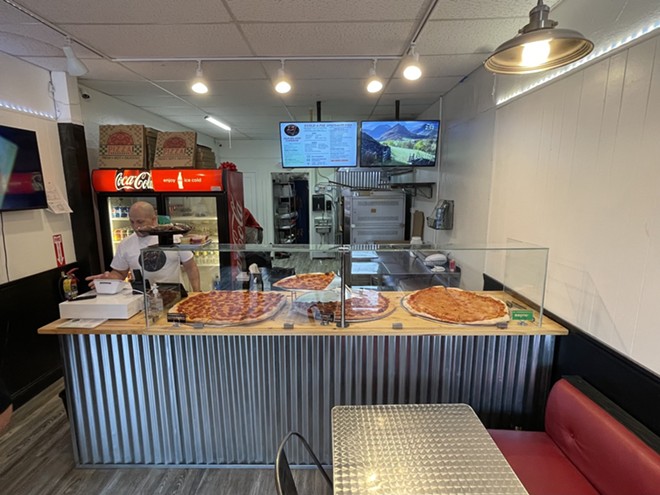 City Slice Pizzeria might be the closest thing Cleveland has to a neighborhood slice shop in Brooklyn, Staten Island or any of the five boroughs for that matter. This sliver of a storefront is loud, bustling and filled with the unmistakable sights and sounds of an old-world pizzeria. Heck, they even have a pizzamaker named Mikey.

Cleveland has no shortage of pizza places, but we’re sorely lacking in slice shops, the kind of places where a hungry shopper can be in and out in a few minutes with zero advance planning. And if we’re counting slice shops that traffic in real-deal New York-style pie, the number drops to almost zero – especially now that we’ve lost Vincenza’s.

Open since February, City Slice has attracted an enthusiastic fanbase of New York-style pizza lovers, which is how I first learned of the place. At any given hour on any given day, one can walk in and choose from three different types of slices, which will be tossed in the brick oven to reheat for a couple minutes. While this approach is second nature to East Coasters, locals sometimes need a little schooling, says owner Vanessa Reyes.

“People come in and ask if they can get fresh pizza,” she explains. “They don’t understand that we put it back into the oven until it gets hot.”

In a form of appeasement, perhaps, City Slice lists the time that the pizzas were baked, with an assurance that no slice will be sold after more than two and a half hours. Seasoned pros will tell the pizzaiolo how they want their slices reheated: warm, hot, well done. Finish them off with a sprinkling of grated parmesan and dried red pepper flakes and all is right with the world for the time it takes to polish them off.

City Slice’s slices are carved out of gigantic 40-inch pies, which results in single slices that are larger than an entire Neapolitan pizza. The thin, chewy crust is soft enough to fold, which prevents flopping, but sturdy enough to support the toppings. A thin but even layer of salty low-moisture mozzarella barely covers the mildly seasoned red sauce. Like any great NY-style slice, it’s the balance between crust, sauce and cheese that creates a winning slice.

“When we started doing this, we tested the recipe at least 30 to 40 times,” Reyes reports. “We weren’t going to serve just anything; it was going to be as close to New York as possible. People think it’s super, super easy, but I feel there’s a kind of skill.”

City Slice will always have cheese, pepperoni and one specialty pie available. That special might be meat-lovers, veggie, supreme or the signature cherry pepper pie. Slices go for between $5 and $6.50 depending. Whole 18-inch pizzas ($25) can be ordered for pick-up or delivery, but not the giant 40-inchers, notes Reyes. “Boxes that big are impossible to find,” she says.

If you like spicy, do not miss out on that cherry pepper pie, which combines those mouthwatering sweet-hot peppers with pepperoni, sausage and red onion.

Customers are free to design their own pies from a concise list of meats and cheeses.

In addition to the pizza, City Slice offers a side salad, house salad and a heartier antipasto salad ($9), which is capped with a hoagie’s worth of deli meats and cheeses. I’d prefer something other than floppy leaf lettuce, but the greens were outshined by the toppings anyhow. We really enjoyed the well-built Italian sub ($9) and will be back to sample the house-made meatball and baked chicken parm. For dessert, there’s New York cheesecake topped with strawberry or chocolate.

Recently, the corner space immediately next door to the pizzeria became available and Reyes jumped on it. The addition more than doubles the size of the property, allowing for more dine-in seating, an ice cream parlor and mini arcade. The aim is to make a family-friendly gathering space for pizza and dessert lovers.

Reyes, who also is affiliated with Cleveland Mofongo Latin Grill three blocks away, says that there are future plans to expand the kitchen and the menu, with items like hot appetizers and a few pasta dishes likely to be added.

Looking a little further down the road, don’t be surprised if a City Slice location pops up in your neck of the woods.

“I’m already thinking about doing one on the east side,” Reyes says. “And maybe Old Brooklyn.”