Damas Eatery, Newly Opened on Cleveland’s West Side and Owned by Syrian Immigrants, Is Already Putting Down Solid Roots

The restaurant found a home in the former Kifaya's Kitchen space 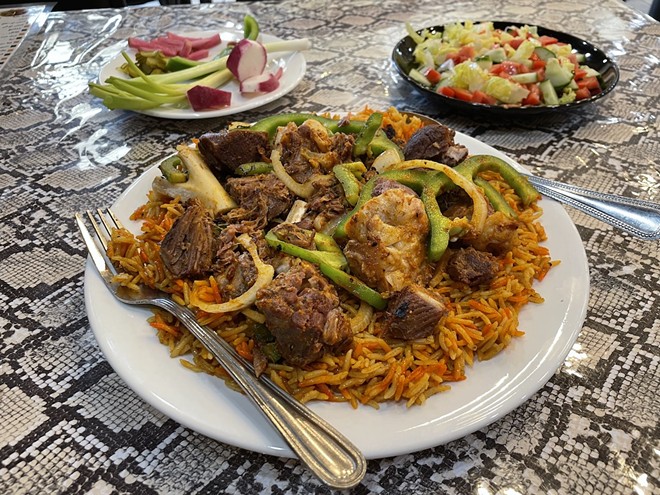 Kifaya's Kitchen was a dream come true for Kifaya Mohamed. After fleeing Somalia as a refugee, Mohamed made her way through Yemen, eventually settling in Cleveland where she was able to open a restaurant that showcased the foods of her homeland.

After eight years, Mohamed was ready to move on from the restaurant grind, but in a symbolic passing of the torch, she placed the restaurant into the hands of another passionate immigrant. Yaseen Allaham, who fled war-torn Syria, has taken over the westside restaurant and in July opened Damas Eatery.

“We left Syria as refugees, lived in Jordan as temporary residents and then came to America in 2016,” Allaham explains. “Before we came to America they asked us if there were any specific states that we would like to go to. But we didn’t know anyone in America, so we let them choose for us and they chose Cleveland.”

Allaham says that both he and his brother, who helps run the shop, have considerable restaurant experience. During a search for potential spaces, Kifaya’s Kitchen became available. The family improved the kitchen and renovated the small dining room by painting the walls, installing new ceiling tiles and adding some mementos from the Old Country.

“Our decorations were inspired by Old Damascus, which is the oldest continuously inhabited city in the world,” he adds.

Allaham describes the local Syrian community as “fairly small” but tight knit. Now, thanks to Damas, those families have a place to go for comforting, traditional and often celebratory dishes that taste of home. While a Syrian restaurant might sound inaccessible to outsiders, a large part of the menu will be instantly recognizable to most local diners. But that doesn’t mean the flavors will be commonplace.

“If you’re familiar with Lebanese food, you will be familiar with 80 percent of our menu,” says Allaham. “It’s mostly Mediterranean, so many of the items won’t be unfamiliar. Like the hummus, falafel, tabbouli and kibbeh – there are a lot of familiar foods. But even though it looks like Lebanese, it has a special taste.”

A special taste indeed. I’ve enjoyed buckets of falafel in Cleveland over the years, but the version served here ($3.99) is truly unique. The patties are darker, crunchier and nuttier than most. They are served with tahini and some of the silkiest hummus I’ve ever tasted. Same goes for the stuffed grape leaves ($5.99), which have the unmistakable look of homemade. Stuffed with lemony seasoned rice, and sticky from a pomegranate glaze, the mini logs are irresistible.

When you crack open the kibbeh ($9.99) – golden brown, football-shaped pastries – they emit an aromatic puff of steam that signals good things to come. The just-fried pockets are filled with seasoned ground meat and pine nuts, which provide great textural contrast to the crispy shell.

While speaking with Allaham on the phone in advance of my visit, the owner described a dish of which he felt particularly proud.

“Fatteh is a traditional dish that we eat on weekends,” he told me. “I don’t think anyone has ever made this in Cleveland.”

After the wide bowl ($14.99) is placed on the table, the contents are topped with bubbling-hot ghee and toasted cashews straight from a small saucepan. Down below is a deliriously rich and delicious mixture of warm chickpeas, creamy yogurt sauce, and toasted pita chips, which soak it all up. On the side is a platter of raw and pickled vegetables.

As triumphant as the fetteh was, it’s the goat mandi ($19.99) that will beckon me back. Arranged on a bed of fluffy, seasoned rice are meaty pieces of bone-in goat. Expertly cooked, the meat has a mellow, sweet, lamb-like flavor and it separates easily from the bone. Damas offers a variety of sauces to enhance the foods, including a spicy pepper puree and a sweeter one made from roasted peppers.

In the coming weeks, the owners will install a vertical spit in the kitchen for cooking shawarma, which will make its way into sandwiches and dinner plates. An oven, too, will be added for baked items like za’atar-topped flatbreads, cheese pies and spinach pies.

So far, reports Allaham, the feedback has been unanimously upbeat, with positive feedback on the food, setting and service from those who know it the best. Next, the owners will turn their attention to a new patio. And after that, additional locations could come to fruition.

“We’re planning to expand if we’re successful,” he says.