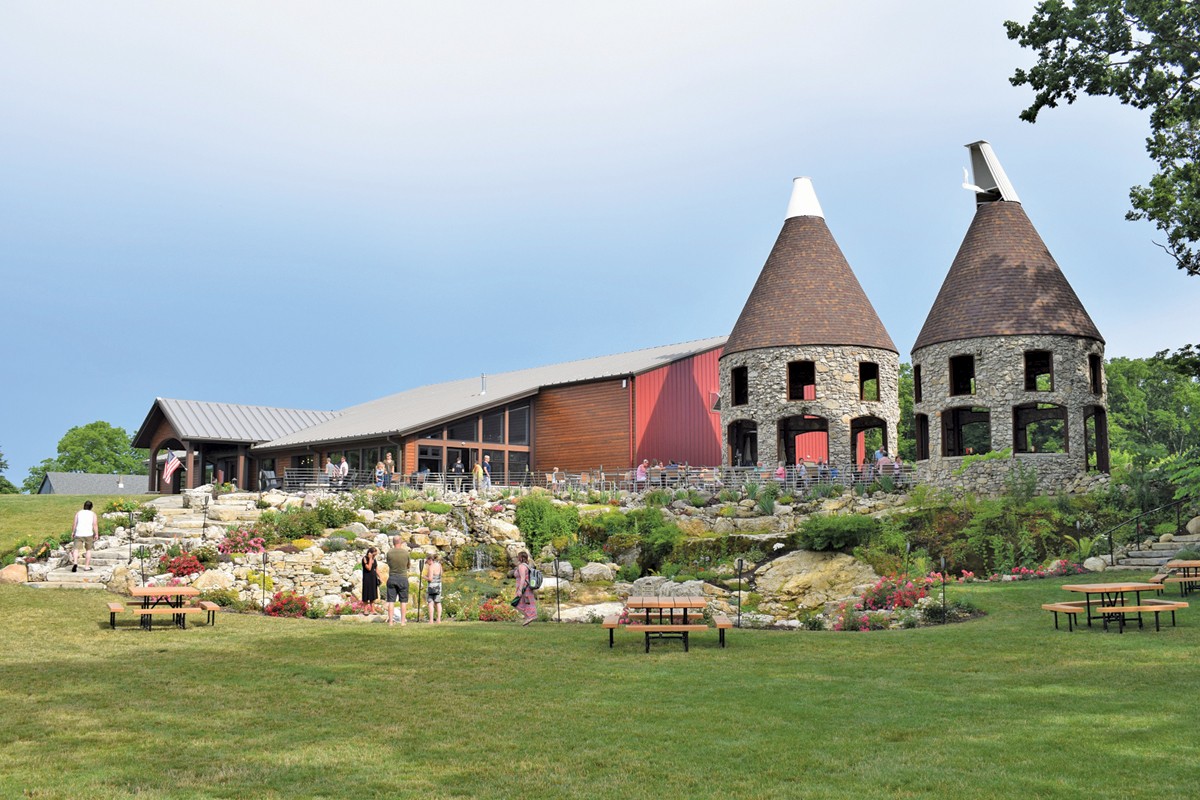 For those of us not fortunate enough to own a little slice of the heaven that is Catawba Island, the peninsula merely is the place one parks his or her car before embarking for Put-In-Bay via the Miller Ferry. But since Twin Oast Brewing opened its doors last year, many revelers are deciding to swap South Bass Island, where the beer is expensive, the crowds thick and the return ferry nauseating, for once-sleepy Catawba.

Like many of the best destination breweries, this one is set on a majestic sweep of land that provides guests with plenty of room to roam. Some 60 acres of prime property are dotted with fruit orchards, flower gardens, percolating water features and enough green grass to host simultaneous baseball games. On warm summer days, the estate is so populated by families that it more resembles a public park than a brewery. But then again, that was precisely the point.

"We decided that the only way to keep the interior of Catawba Island green was to make money on alcohol," says owner Quintin Smith, who watched over the years as real estate developers raced to convert agrarian land to contemporary condos.

After assembling the various plats and parcels, Smith reintroduced stone-fruit trees like cherries, plums, peaches and apricots to the land. Catawba has long been home to vineyards, orchards and vegetable farms and Smith was eager to revive and maintain that agricultural legacy. Adding a brewery, taproom and restaurant not only provided a source of income, it also gave folks a reason to visit and stick around.

Those suds are served up in style-appropriate glassware in an attractive 100-seat taproom. But that room is just a small portion of the overall footprint. Garage doors open onto a spacious stone patio, picnic tables pepper the hillside and then there are those namesake oasts. The replica hop kilns, reminiscent of those one might see in Kent and Sussex, England, house a second small taproom in one and fire pit in the other.

"We thought they were the perfect symbol for brewing and farming colliding," Cory Smith says of the towering oasts.

Beer gets people to breweries; food keeps them from leaving. In typical taproom fashion, Twin Oast employs a system whereby guests order and pay at a counter and runners deliver the food. The kitchen here does a yeoman's job of keeping up with crowds that can easily top 500 on a typical weekend day. That number can swell to 5,000 on event days, such as next week's Apricot Fest, when the kitchen crew gets sweet relief from food trucks and other vendors.

Giant Bavarian pretzels ($10.50) dangling from metal racks roam the room with alarming frequency. They are fat and fluffy, slick with a copper hue and dusted with salt. Dips like beer cheese and seasonal fruit dips (ours had apricot) are included. The "haus-made" potato chips are thick, dark and crunchy and arrive with most burgers, sandwiches and tacos. Beer-friendly fare like spicy fried-perch tacos ($13) and zippy bratwurst sliders ($9) topped with caramelized onions and kraut hit the spot and provide a base for more sampling. Margherita flatbreads ($10) do too if you request that the uber-sweet balsamic glaze remain in the kitchen.

With one year in the books, Twin Oast is cruising through summer under full sail, but that doesn't mean Quintin Smith is coasting. Last month he purchased Mon Ami, a historic property up the road with more ups and downs than the nearby Millennium Force roller coaster. The purchase nets Smith an additional 24 acres of land, 36,000 square feet of structure and what he labels "the largest wine cellars in America that nobody knows about." In addition to improving every facet of the antiquated operation, Smith intends to return vineyards and winemaking to the once-significant estate.

It's another step in the Smith family's master plan to help preserve the island while turning it into a four-season destination.

"If you're looking for that big-city feel, you're probably not coming to Catawba," says Cory. "But if you're trying to go somewhere quaint and fun, I feel Catawba has the potential to become something like Traverse City based on the agriculture, wineries and breweries."