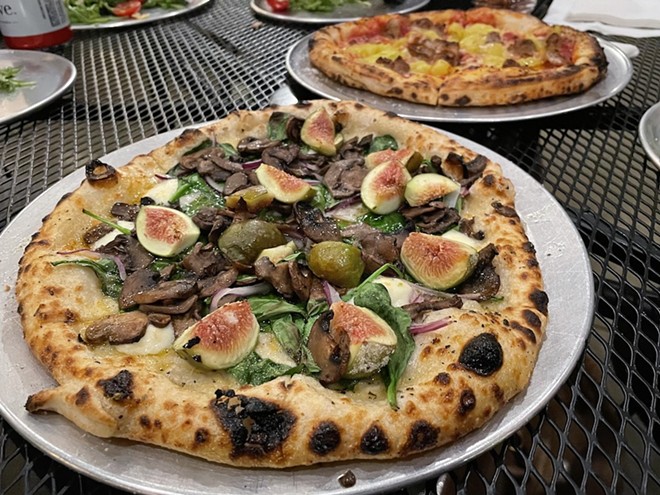 For many families, the Friday night ritual of heading out for pizza is as ingrained a tradition as the snapping of first-day-of-school photos. Over the years, these easygoing pizza joints become a treasured part of the fabric of the community and indelible slices of the adolescent experience. If a recent Friday night is an accurate sign of what’s to come, then ETalian is poised to become one of those places for the residents of Chagrin Falls.

As daylight faded, the attractive space began filling up with parents and excited teens, who eagerly lined up to place their orders at the counter. Behind that counter stood chef and owner Eddie Tancredi, who endeavored to keep pace with the mounting demand. Assisted in the open kitchen by longtime sous chef Earl Warren, Tancredi continually fed the insatiable beast that is the wood-fired oven, extracting baked pizzas with a peel and immediately replacing them with uncooked ones. Even at a rate of one pie per minute or two, the task appeared somewhat Sisyphean.

While the ritual of the Friday night slice has remained immutable, the style of those pies most certainly has not. My family’s weekly local specialized in that prototypical Cleveland variety, which is to say thick and buttery, sweet-sauced and cheesy, and classically topped. Essential to the experience was the familial negotiation process, whereby parents ordered whatever the heck they wanted but the siblings were compelled to reach some sort of complicated détente. Kids bound for ETalian, on the other hand, enjoy the unfettered freedom of the personal pizza.

Tancredi might not be the first in the area to hop on the Neapolitan bandwagon, but he is more than holding his own in the quality department. His 9-inch pies exit the blistering Italian oven with the proper amount of charring – or leopard spotting – which is an essential characteristic of the style. The pies are ringed by a puffy, airy crown and the crust below is slender but sturdy enough to support the toppings. Most importantly, that dough has a depth of flavor indicative of a long, slow fermentation.

The menu lists eight predesigned pies and typically one special. Our table shared a classic pepperoni ($11), mushroom and banana pepper ($11) and sausage ($11). We added the night’s special ($11), which was topped with quartered fresh figs, and it proved the least popular of the bunch. At ETalian, the decisions don’t end with the pizza selection; pies can be ordered unsliced, sliced, kid-sliced (8-count) or folded “wallet-style” and tucked into a paper pouch for mobile enjoyment.

Don’t sleep on the cheesy bread ($5), which is like a bloomin’ onion but with fresh-baked bread, gooey mozzarella and pepperoni ($2) that is surprisingly light, herby and savory. After a quick spell in the wood oven, the flower-cut bread gets ripped apart by hand and enjoyed. The antipasti salad ($7.99) offers a tasty and traditional mix of greens, cheese, olives, banana peppers and artichoke hearts. Other salads include a Greek and arugula. For dessert, there’s a half dozen gelato flavors, which can be enjoyed straight from the cup or in sandwich form ($5.99) after being tucked into a fresh-baked bun. To drink there is a limited selection of beer and wine in cans and simple cocktails.

An elaborate renovation process has transformed a notable and historic – but long vacant – brick building in the heart of downtown into an open and attractive space with exposed brick walls, cathedral ceilings, original beams and windows that offer views of the upper Chagrin Falls. The petite restaurant seats about two dozen inside with room for another two dozen in the adjacent courtyard patio. Orders for food and drink can be placed online for speedy pick-up, in-person at the register or at a countertop kiosk that bypasses the line. Guests grab their own food and utensils when their name is called.

For families in search of a fun weeknight activity, ETalian offers pizza-making kits that include enough dough, sauce, cheese and toppings to whip up two pies. Four different versions are available.

Tancredi, like everybody in the industry, had a brutal 2020. His Distill Table in Lakewood closed a few months after the Governor shut down indoor dining. The experience is precisely what motivated the chef, who comes from fine-dining, to pursue a fast-casual operation like ETalian. When the location presented itself to him, he leapt at the opportunity. The marriage of setting and concept seems like a winning combination for Tancredi and the community.