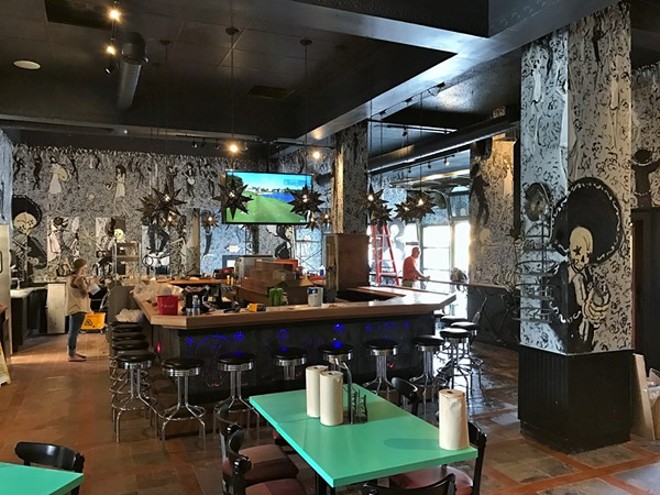 Federal Judge Pamela Barker last week ruled against Barrio in the trade infringement lawsuit it filed in 2018 against Condado that alleged Condado stole its concept and that former Barrio partner Joe Kahn violated an agreement with Tommy Leneghan and Sean Fairbairn by opening Condado restaurants in Columbus and then Northeast Ohio suburbs.

Barrio argued in its suit that it deserved trade protection for its concept and "vibe," specifically from the combination of a build-your-own taco menu, the Day of the Dead themed murals that decorate its restaurants, the fact that servers wear street clothes, the use of mason jars for draft beer, the use of a 'chit' system to make an order, table caddies with paper towels, etc.

It did so seeking protection under the Lanham Act, a consumer-focused federal statute that protects trademarks, against unfair competition and in favor of trade elements in the interest of making sure consumers know where their goods come from.

Instead, Judge Barker found, after years of discovery, motions and depositions, that, "When viewed as a whole, [Barrio's concept] is overwhelmingly comprised of generic elements."

"The Court concludes that nearly all the elements that comprise Barrio’s alleged trade dress 'are far too typical of other restaurants,' particularly restaurants in the trendy casual and Mexican genres. Uncovered tables, paper towel spools, mason jars, sporks, foil-wrapped food, and paper trays are generic and not unique to Plaintiffs’ restaurants."

Leneghan, when asked about the Day of the Dead topic, "admitted in his
deposition that Day of the Dead motifs and skeleton artwork are not uncommon to Mexican restaurants."

And, the judge wrote, Barrio itself borrowed elements for its concept from other restaurants.

"Moreover, Plaintiffs do not explain how Barrio's 'unique, hip, energetic, and eclectic atmosphere' is distinct from that of any other restaurant. Indeed, Leneghan and Kahn drew inspiration for Barrio's atmosphere from the cool 'vibes' at Mexican restaurants like Momocho and Mad Mex. No doubt Momocho, Mad Mex, and the other restaurants from which Leneghan and Kahn drew their inspiration — including Happy Dog and the Barrio chain in Minneapolis (with which Plaintiffs' Barrio restaurants share a nearly identical logo) — endeavor to establish equally vibrant, hip atmospheres. The Lanham Act is intended to protect 'the concrete expression of an idea,' not abstract ideas, concepts, or styles of doing business.'"

Barrio also contended that Condado should be found in breach of contract. When Kahn separated from the company years ago, he signed an agreement not to do business under the name Barrio, to not use any of the marks or logos, and to not open a Mexican restaurant within two miles of a Barrio for two years.

Not only did the court find that Kahn abided by those terms, it also found Barrio was aware at the time the agreement was signed that he intended to open a Condado in Columbus. The agreement didn't specify whether any future restaurant could use a build-your-own taco menu, and only three years after Kahn's venture opened in Columbus did Barrio file a lawsuit. (The court noted that eclipsed the two-year limit on filing such claims.)

Barrio could file an appeal, though the judge's inclusion in her ruling that the breach of contract claim falls outside of the statute of limitations might make that unlikely.