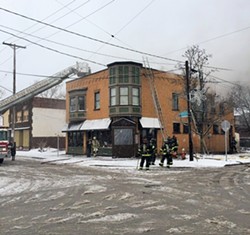 A fire at Lolita, Michael Symon’s Tremont restaurant, began early afternoon, according to the chef and owner.

“[It] started between the top floor ceiling and the roof, so they had to cut it open,” he explained, while still in constant contact with responders on the scene. “[There’s a] tremendous amount of smoke upstairs. We currently don’t feel as if it has spread downstairs.”

No word, obviously, as to when the restaurant will reopen as the story is still developing. The extent of the damage is still being assessed.

The silver lining is that nobody was injured in the blaze.

“This is just fucking awful, 19 years of memories literally going up in smoke,” Symon said.

We'll keep this page updated with information as it rolls in.