For More Than a Century, Service Wet Grinding Has Kept Cleveland's Chefs' Knives Sharp and Ready 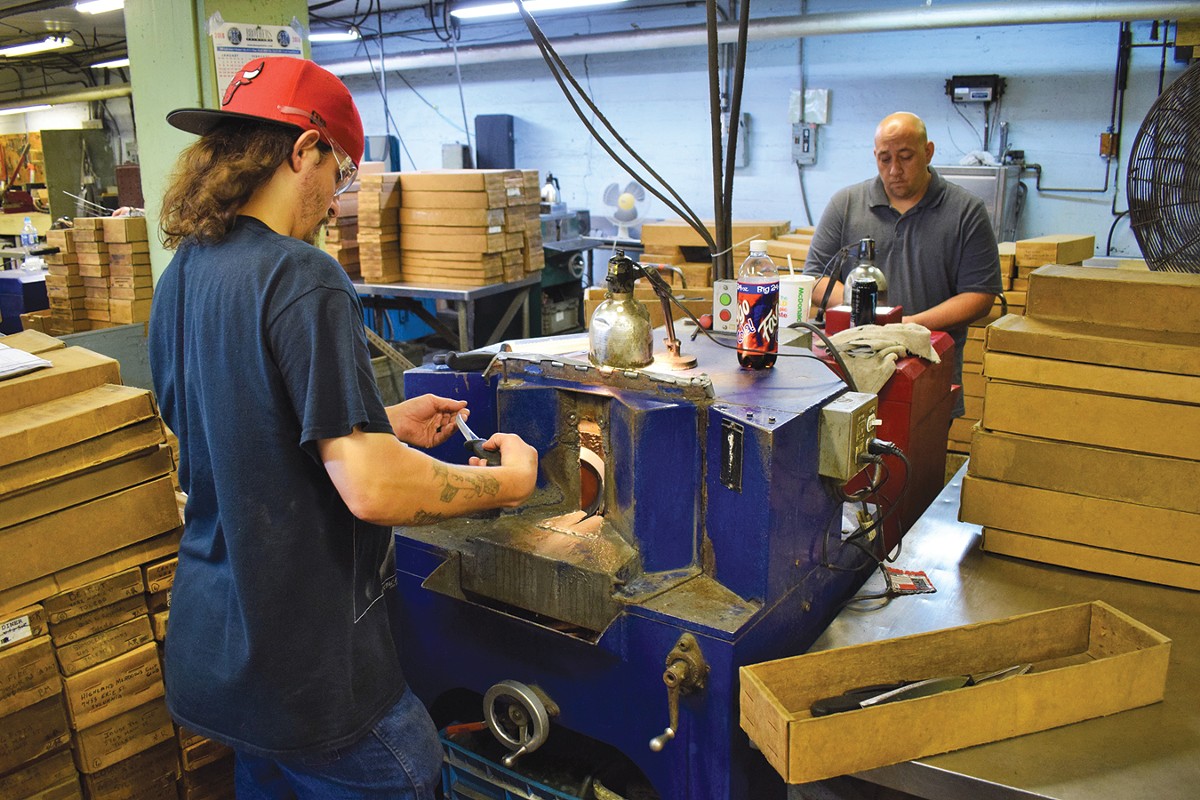 The love affair between chefs and their knives is well documented, but walk into nearly every commercial kitchen in town and you will find the same assortment of bland plastic-handled cutlery. Those blades are owned not by the cooks who use them, but by Service Wet Grinding (1867 Prospect Ave., 216-771-4874), a local business that operates a knife supply and exchange service. On a weekly, bi-weekly or monthly basis, drivers drop off an assortment of freshly sharpened knives while picking up an identical set of dull blades.

"They run the city," John Selick, senior culinary manager for University Hospitals, says of Service Wet Grinding. "Everywhere I've ever worked, we've used them. And they were the first people I called when we opened Ahuja."

Located beneath a nondescript storefront on Prospect is a clamorous workshop where more than a dozen employees grind away the day. Blades are ground, honed, buffed and cleaned, before getting boxed up for delivery to more than 5,000 accounts stretching west to Toledo, south to Mansfield, and east to Pittsburgh. The tall stack of outgoing orders reads like a Who's Who of national fast food chains, neighborhood pizza shops, family-run Mexican restaurants, supermarkets and chef-owned bistros.

In the age of consolidation, e-commerce and the demise of the independent business, Service Wet Grinding is an outlier seemingly immune to market forces. Since 1905, they have been the local choice when it comes to knife sharpening and, later, knife rentals. Commercial kitchens need a steady supply of sharp, durable and sanitary knives and, like most crafts, the process is not as simple as it appears.

"Every city has at least one knife rental company like us," says owner Lance Ambrose. "There are three of us in Ohio. It really comes down to the equipment: We grind the blades on big, expensive machinery, not little tabletop things."

We've all seen chefs "sharpen" knives in dramatic fashion by swiping them back and forth against a steel. But that action is more accurately described as honing, a process that merely stands the edge back up. To truly sharpen a dull blade, you need to remove steel to create a thin bevel. And the more times you sharpen a knife, the farther you move into the thicker part of the blade and the more difficult it becomes.

Sure, some chefs do it themselves on a collection of whetstones, but they are an anomaly in a typical commercial kitchen.

"It's getting harder and harder to find cooks, even serious career-minded cooks, that show up with their own knives," Selick explains. "It's hard for me to expect applicants off the street to have them, let alone keep them sharp. I like to sharpen my own knives, but there's a lot of skill to that. And it's a 10-minute process per knife, time that nobody has."

Customers select from a catalogue of dozens and dozens of various boning, slicing, carving, paring and chef's knives, which are swapped on a consistent basis depending on the need of the client. A small pizza shop might opt for monthly service while a busy meat or fish wholesaler will exchange knives twice a week. Typical quantities range between eight and 30 knives per account. In addition to knives, Service Wet Grinding also keeps your meat slicer, food processor, mandolin, meat grinder and can opener blades and plates in good nick.

When Ambrose's relatives set up shop in Cleveland more than 110 years ago, they operated out of a horse-drawn wagon that pulled up to places like the Central Market and later the West Side Market, where they would sharpen knives on the spot. In 1952, the company initiated the knife rental business that grew popular with hotels, supermarkets and the limited number of restaurants that existed at the time. As the number of food service providers ballooned over the past few decades, so too did the client roster. These days, those accounts include nursing homes, large arenas and stadiums, breweries and, oddly enough, gas stations.

Service Wet Grinding is also where home cooks and top chefs drop off their pricey (or not) knives to be professionally sharpened. For roughly $3 to $5 per blade, you can enjoy cutlery that is as sharp as it was on the day it arrived. Orders are almost always completed by the next day.

But the bulk of the business will always be busy commercial kitchens like the one at Ahuja Medical Center, where bosses like John Selick need to provide their team with the right equipment to get the job done safely and efficiently.

"A sharp inexpensive knife is better and safer than a dull expensive one," he says. "And these guys offer that old-school personal service that you don't find anymore. Kind of like the milkman who used to come to your door."