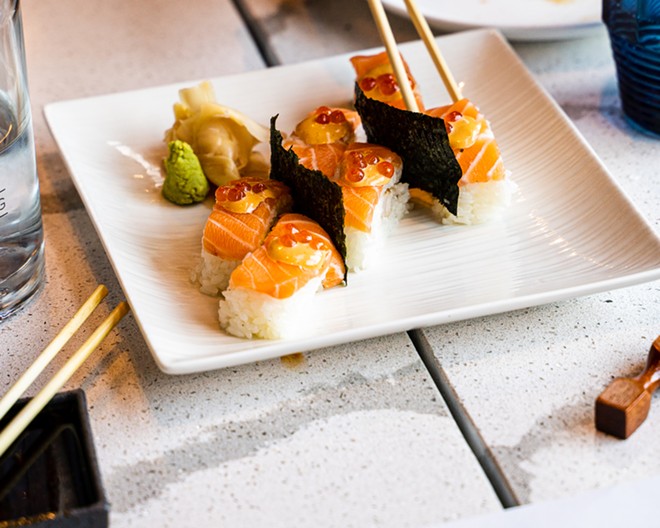 Photo by Nic Paoletta
Goma dazzles on East 4th
As we made our way from Progressive Field towards Public Square, the area around East 4th Street and Prospect felt animated in ways that it hasn’t in years. Diners spilled out onto sidewalk patios that snaked up and down and around the block. Through the awning windows of Goma we could see a hopping bar, a buzzing restaurant and even catch glimpses of chef and owner Dante Boccuzzi, the man largely responsible for the street’s present-day excitement.

For a moment there it looked like Cleveland’s brightest star had begun to lose its luster. East Fourth Street, home to celebrity chefs like Michael Symon, Zack Bruell and Jonathon Sawyer, was suffering an identity crisis after the rapid-fire closures of Chinato, Greenhouse Tavern and Lola. There was light at the end of the tunnel, but that tunnel felt like it was getting longer and longer, with promised projects continually getting pushed further and further back. Chief among them was Goma, which had been a topic of breathless conversation for two and half years. But now that it’s finally here, we can breathe a collective sigh of relief.

Unlike Ginko, which feels more like a cloistered shrine to raw fish, Goma is more open, inclusive and comprehensive in its offerings. This is the type or place where friends can pop in for a few sushi rolls and cold sake on the way to a baseball or basketball game, yet also would appeal to couples in search of a sweet date-night spot. The construction crews managed to completely transform the former Chinato restaurant into an entirely new environment. Gone is the chopped-up space, hushed tones and peekaboo kitchen, replaced by a boisterous, unified space that is dominated by a large, central cocktail bar slash sushi bar.

If Cleveland, like most cities, is suffering from a labor shortage, one would be hard pressed to recognize it when visiting Goma. Behind that three-sided bar is a cadre of spirited sushi chefs. In the kitchen is another battalion of cooks. There are even two hosts, for goodness sakes, eager to usher guests to tables inside or out. Once seated, diners are guided by servers through the extensive two-sided menu, which is divided, much like the restaurant itself, between raw and cooked food items.

What Boccuzzi was looking forward to most, he stated during the lengthy leadup to opening day, was being able to expand the roster of hot Japanese and Japanese-fusion dishes – items like tobanyaki, wok-fried rice and noodle soups. Like those served at the famed Nobu, where the chef previously worked, tobanyaki are elegantly composed meals that are roasted and served in shallow ceramic vessels. Options range from tofu to tenderloin, with the gently cooked proteins joined in a seasoned soy sauce base by asparagus, greens and Japanese mushrooms. The pork belly version ($16) featured a half dozen slabs of tender, succulent meat.

Wok-fried noodle and rice dishes like the stir-fried beef ($21) are large enough to share and loaded with juicy meat, snappy vegetables and perfectly cooked rice. If you’ve ever ordered off Dante’s late-night noodle menu in Tremont, then you know about his passion for udon and ramen. Goma offers a concise selection of bowls filled with pork ($15), miso or vegetable broths, a choice of noodle and accompaniments like pork belly, soft-cooked egg, bok choi, mushrooms and nori.

There might be no better place in town to enjoy sushi right now than on East 4th Street. The setting, selection and quality of ingredients and preparation at Goma are stunning. From a flawless slice of yellowtail sashimi ($6) on up to a creative roll featuring crispy tempura-fried shrimp, the options are gloriously boundless. That shrimp roll ($14) contained crispy seafood, asparagus, rice and roe, with the spear and shrimp tail climbing high like a city skyline.

Order the botan-ebi ($6) and you’ll enjoy a plump piece of sweet shrimp served raw atop a fistful of vinegared rice. That delectable bite is followed by a delivery from the kitchen of the shrimp head, now lightly battered and fried into a crunchy snack. I savored the best piece of uni ($14) in recent memory as well as firm twists of spicy tuna and egg ($9) and hamachi and scallion ($9). For diehard sushi barflies, specials like steamed abalone ($26), sliced and served in its iridescent shell, are not to be overlooked. Likewise, diners can opt for an omakase tasting of sashimi or nigiri that features the day’s freshest catches.

Even today, two months and change after opening day, Goma is an unfinished project. The tables holding the built-in shabu-shabu burners still need tweaking, and the downstairs craft cocktail club, Giappone, also is a work in progress. But as it stands today, Goma already is helping to propel the downtown dining scene into its next golden era.