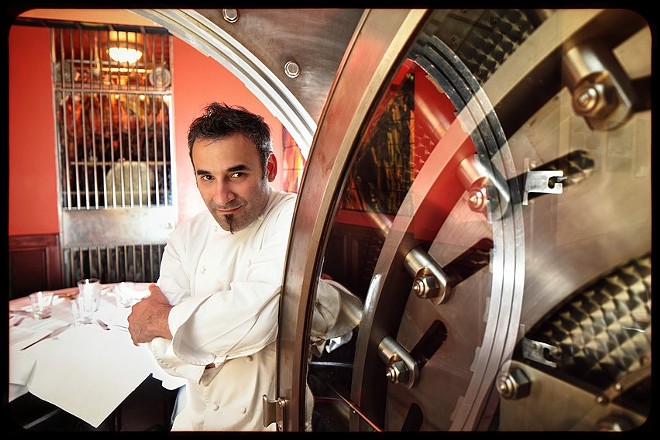 Dante Boccuzzi
The on-again, off-again Japanese-fusion concept from chef Dante Boccuzzi is back on and moving forward, he reports. Construction on the E. Fourth Street restaurant resumed yesterday, with an anticipated spring arrival.

Boccuzzi first announced his plans for the restaurant two years ago, when the expected destination was Pinecrest. Last winter, the chef revealed that he no longer had eyes for the suburban lifestyle center, instead choosing the city center as the future home for his ambitious project. In February, he divulged that the location would be the former Chinato space at the corner of Prospect and E. Fourth. When it opens, it will be the prolific chef’s first downtown restaurant.

“Fourth has a lot more potential, I think,” he told Scene at the time. "It’s a larger space, there’s more energy, and we’re going to open up the space on two sides with garage doors.”

Boccuzzi says that the concept is somewhat of a distillation of his many years of culinary experience around the world.

“The whole inspiration comes from my time spent with Nobu and the Mandarin hotels,” he explains. “It’s not full-on Japanese; there will be a lot of fusion that pulls from my experiences working around the world. I’m going to pattern it after a Nobu-like experience – high-energy with music, color, yelling, great food and table-sharing.”

Construction workers are busy tearing down the wall that separated the small barroom from the main dining room, opening up the entire space. In the basement will be Giappone, “a modern and edgy Japanese craft cocktail club” that will be open on weekends and to coincide with special events in the neighborhood.

As for the street he'll call home, Boccuzzi reports that he's still bullish. The past year has been a brutal one for the neighborhood, which lost high-profile eateries like Greenhouse Tavern and Lola Bistro from high-profile chefs like Jonathon Sawyer and Michael Symon.

"We're anticipating a bright future," Boccuzzi says. "Things have to come back eventually. I'm no doctor, but with the vaccine and all that coming, by springtime I would think we should see some positive changes."

As for the chef's other Cleveland spots, Dante and Ginko, he reports, "We're surviving. We have challenges like anybody else, but we're doing alright."