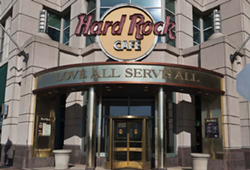 Courtesy Hard Rock
The string of restaurants and bars that have joined the fray of the Cleveland dining scene in the past couple of years is staggering and every week seems to bring a new announcement of an addition. That's been especially true in recent months as Cleveland looks forward to July and the arrival of the RNC.

July, however, will bring at least one closing.

A press release from Hard Rock announced today that the Hard Rock Cafe Cleveland, highly visible outside of Tower City thanks to the big ole guitar by the road, will be shuttering. A specific date has not yet been announced.

The "strategic decision," according to the release, is due to Hard Rock shifting efforts to the Hard Rock Cafe at Northfield Park and the Rocksino.

The downtown location opened back in 1998, one of the seemingly endless Hard Rock cafes dotting the world, back when Tower City was in its glory days. Those days have gone and recent months have seen major changes coming to the complex — Dan Gilbert bought the Avenue at Tower City and K+D is in negotiations to buy the tower itself, with all its attending office space. Apartments are planned and who knows what Mr. Gilbert has in store for the mall, but it's sure to be better than what's there now.